A classroom like no other: Students to venture deep into the Arctic Circle to conduct innovative research 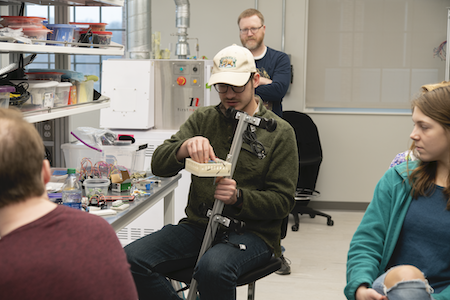 Alex Anderson updates the class on his research project.

In early March, a team of Radford University students and faculty, along with two Governor’s School students, will head on an expedition that will take them to the northernmost point of the United States – Utqiagvik (Barrow), Alaska.

Braving frigid temperatures, often at -40 or below, the team of researchers will venture out onto the Arctic sea ice in the name of science to an area that is only accessible via plane.

The students will conduct research in innovative ways to measure various characteristics of the sea ice, including microplastics found in the sea ice, bacteria found in the ice, effects of wind and friction on the ice and the impact of tidal forces on the ice. Each of the excursions to Utqiagvik builds upon each other to continually innovate the student experience and provide the best hands-on education possible.

Students will bring tools and equipment from Radford and assemble their gear after arriving in Utqiagvik, adding additional field experience to their research background.

Rhett Herman, Ph.D., professor of physics and director of the Radford University Planetarium, leads the experience. In the spring of 2003, Herman went to the North Pole with two students to test a geophysical method for measuring ice thickness. While the equipment used in the field did not work, it sparked an interest in geophysics for Herman. 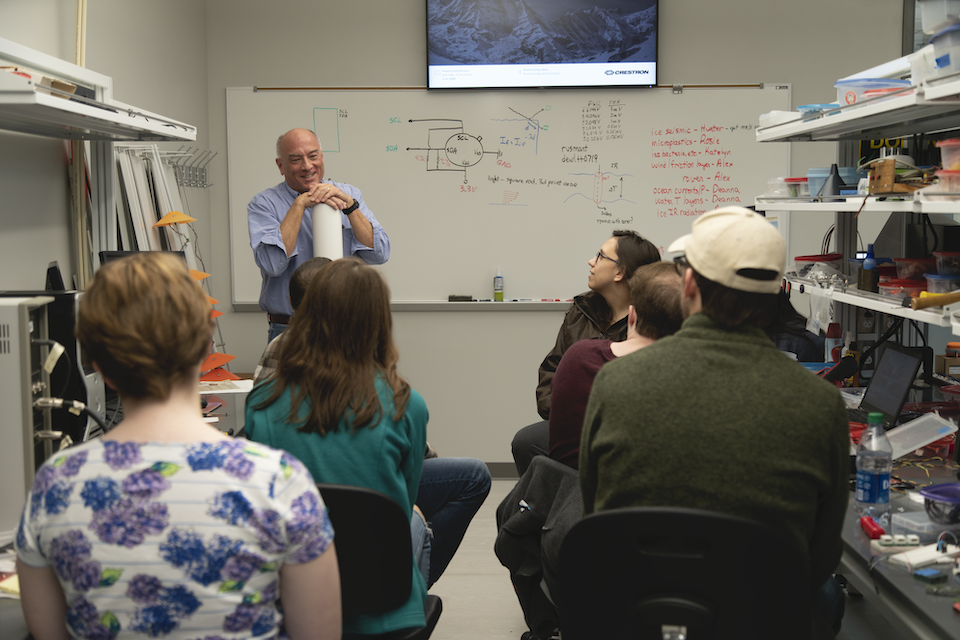 The class discusses what awaits them in Utqiagvik, Alaska.

Shortly after that, a trip was taken to Utqiagvik to test a piece of geophysical equipment that measures electrical resistivity. The testing went well and was expanded into a class in 2008.

Originally, the trip involved students in Herman’s research, but has since evolved into students conducting their unique research.

“I would see them troubleshoot when things went wrong, and they did some amazing MacGyvering of things while up there in the field. There’s not much equipment up there, nor raw materials,” Herman said. “We had to do like the Apollo 13 crew and ‘work the problem’ with the few existing resources. Over the years, we worked with more types of resistivity and ground-penetrating radar. We started to create some of our own equipment, which has evolved into the student-driven DIY that you are seeing now. These students become full researchers in a short time and learn to work and improvise in one of the last frontiers on this planet.” 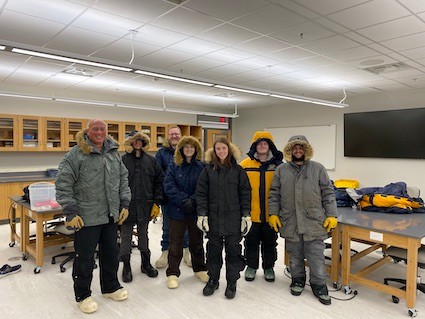 Students try on their gear during one of the class meetings in January 2020.

Hunter Witt, from Thaxton, Virginia, is one of the students participating in the Alaska trip this March and is working on measuring sea ice fracturing rates around Utqiagvik.

“I'm going to try and correlate that with some of the other students' research, such as ice temperature, wind gradients, wave action and more so I can try and understand why I see fractures in the sea ice,” Witt said.

After conducting his research, Witt hopes to publish and present it at a physics research conference.

Katelyn Collett, a Governor’s School student from Southwest Virginia, is collaborating with the Department of Biology at Radford University to pursue her project on the concentration of microorganisms in the sea ice forward.

“We will be taking ice core samples from different areas by measuring the angle of the sun, the salinity and more,” Collett said. “We will then stain the bacteria and sort them into groups. Finally, we will bring the samples back here to test them.”

Collett’s world experience will quickly expand on this trip, as she has never before been on an airplane.

The student researchers will also spend time taking in the local Alaskan culture, including giving presentations to local community members about their research.

“I want them to learn how to get something done that no one has done before,” Herman said. “All of our experiments are new work and things that others have not done. It’s just now dawning on them that when I say, ‘I don’t know what we’re going to find up there…’ then I truly mean it. I want them to develop their own confidence in themselves, in their abilities to solve problems in stressful situations and in one of the harshest and most strikingly beautiful places on Earth. I also want them to get data that is truly new and ‘worthy’ of being presented in the fall.”

Each Alaska trip has resulted in at least one student presenting at the Fall Meeting of the American Geophysical Union (AGU), the world’s largest gathering of earth and space scientists, with more than 23,000 attendees that include scientists from NASA or NOAA.

Experiences such as the arctic research trip to Utqiagvik give Radford University students a new world perspective and allow them to conduct innovative field research that aids them in their unique academic journeys while providing life-changing experiences.