The only motivation Kristin Buck Hinson ’14 needed to create the “Foodies for Frontliners” initiative was watching her mother go to work every day.

“My mother is a cardiac nurse who also has multiple sclerosis,” Hinson said. “So, for her to continue going to work was very nerve-wracking for the family. But she doesn’t really see it like that. She sees it as her job and what she signed up for. She loves taking care of people. I wanted to do something to help people like my mother during this challenging time, but I wasn’t sure what to do.”

Hinson, who double-majored at Radford in interior design and studio art and is now an assistant project manager at RRMM Architects, decided to put together snack bags that included Gatorade, Goldfish, fruit snacks, a granola bar and a thank-you note. Her plan was to give the bags to nurses and other front-line employees in her hometown of Suffolk, Virginia, so she named her project Foodies for Frontliners and decorated the bags with a logo she developed.

“I have a special place in my heart for Sentara Obici Hospital,” Hinson said. “My mother, Sandy Buck, has worked there for many years, and it is also where my son was born. I have a lot of friends who are nurses there, too, so that’s where I started my mission.”

What Hinson thought would be “a fun little project” then went viral after she posted about it on social media. As a result, she began receiving donations from all over to add to the bags. 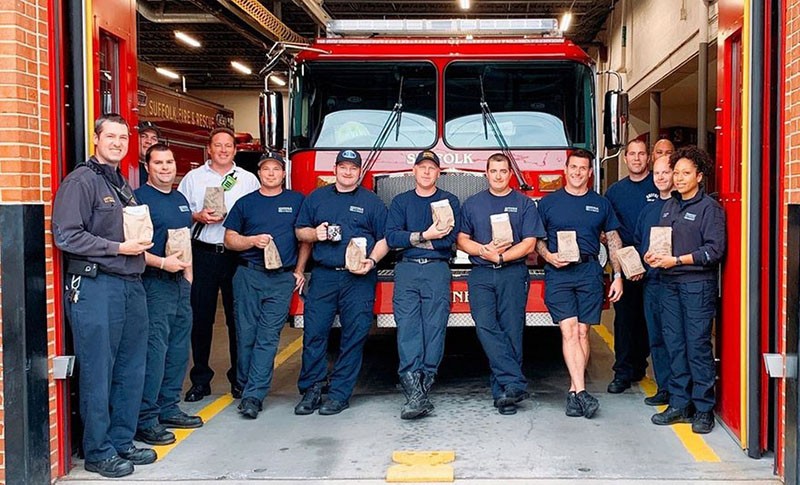 Members of the City of Suffolk Fire Station #1 with their "Foodies for Frontliners" bags.

“It was amazing,” Hinson recalls. “We couldn’t have made it happen without people in our community, and we’re so very thankful. I also had a lot of help from one of my best friends, Courtney Ankofski. We've been partners through this whole process.” 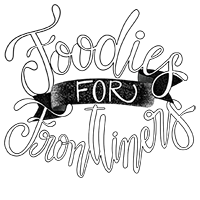 Hinson estimates that between the bags she has already distributed and the current supplies she has on hand, she should be able to provide bags to nearly 1,000 front-line workers. She said she has given bags to all 362 front-line staff at Obici Hospital and recently provided 255 bags to the Suffolk fire stations and 245 to police stations throughout the city.

“The most touching part of this whole thing is just seeing smiles and surprised faces,” Hinson said. “Just seeing those made me feel so accomplished and that my initiative was a success. I know what we are doing isn't life-changing or anything, but if we can make someone smile who is out there fighting every day, that's all I want.”

#HighlandersRise is an initiative to spotlight how Radford University students, faculty, staff, alumni and community members push through fear and frustration to pursue their hopes and dreams, even in trying times. Our resiliency sustains us, and our responsiveness empowers us. The entire Radford family, both near and far, is demonstrating a tremendous amount of strength during the unprecedented times we are facing locally, regionally and globally.