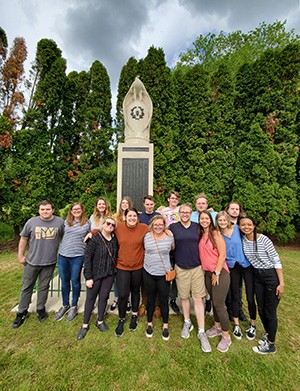 The 2019 study abroad group visited key sites from both the World Wars in American history.

Professor of History Richard Straw, Ph.D., is no stranger to hosting a study abroad experience – he has been facilitating these experiences of a lifetime since 1995.

Straw’s area of expertise is Appalachian studies, and he designed his study abroad experience around the Appalachian connection to Ireland, Scotland and England, where students are able to see firsthand the connection between the New River Valley and its Scots-Irish heritage.

In 2012, Straw got an idea that modified his study abroad program – a focus on World War I and II. The new program was called America in the World Wars. One serendipitous happening occurred during that trip in 2012, when Mary Shinholser ’13, of Mechanicsville, Virginia, visited the French town of St. Lo.

Shinholser read a letter from her great-grandfather, who served in World War II, for just the second time in her life. This time, she read the letter while standing in a St. Lo chapel that was converted to a shrine to honor her great-grandfather and the other troops who helped liberate that town.

Shinholser’s great-grandfather was Maj. Thomas Howie, who helped lead the 116th Infantry ashore at Omaha Beach during the Normandy Invasion, before leading his unit into the town of St. Lo. Maj. Howie was killed in the liberation of St. Lo, but his sacrifice, and that of the other soldiers, lives on in the town’s memory.

While not present for the celebrations, or the numerous state dignitaries who attended, the 15 students who went on the study abroad trip were still able to stand on the beaches that saw the free world push back the Wehrmacht, the unified armed forces of Nazi Germany. 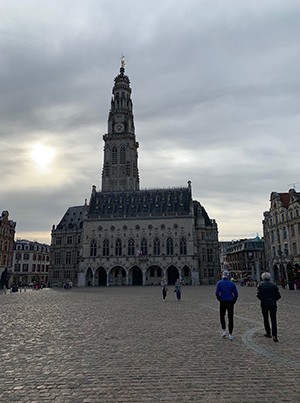 “This is a major world event that has influenced life as we know it today,” Straw said. “This is something that they learned a lot about in school and are very interested in [seeing firsthand]. It is a powerful experience standing on the beaches where so many gave their lives for our freedom.”

The 2019 study abroad experience began just across the English Channel when the group landed in London, England in mid-May. In addition, travelers visited France, Belgium and Germany.

“There was this integration and intersection of the past and present,” Harris explained. “The United States is young compared to a lot of the world. Many of the countries in Europe are five or six times as old as the United States.”

One of the most emotional aspects of the trip for Harris was standing on the beaches in Normandy.

“They are normal beaches now,” Harris said. “But off in the distance, you’ll see people just walking along with their dog and a bunker is in the distance. But, there are still reminders of what happened on those beaches in 1944.”

Another emotional reminder of what happened during World War II was when the group visited a concentration camp, which Harris said was a “stark reminder of the atrocities that occurred.”

Decades later, Germany was still feeling the effects of the war, something the travelers were able to see firsthand when they saw the remains of the Berlin Wall, a structure that separated the free West Berlin and the Soviet-controlled East Berlin. 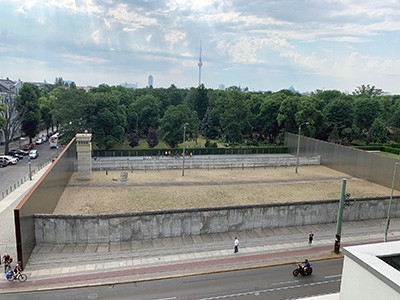 Harris explained that there was a preserved section of the wall in Berlin that served as a reminder of the war and its aftermath.

“There was this one little section that you could climb up onto a tower and overlook it,” Harris said. “They had left the checkpoint well preserved.”

For Harris, one of his favorite parts of visiting Germany was when he got to visit Nuremburg, another city of historical significance that dates back to the Roman Empire. The city was also the location of the Nuremburg trials, when in 1945-1946, German officials involved in war crimes and crimes against humanity were brought before an international tribunal.

In each of the cities and locations visited by the study abroad group, the students followed an educational itinerary. A major aspect of the trip, Straw said, was the freedom of students to be able to find their own educational activities and cultural events.

Straw’s unique study abroad experience in Europe is an example of how Highlanders are not only making an impact on the world, but also how the world is having an impact on them. Students return to Radford University ready to emerge as leaders in their local communities and beyond.