Looking to get more involved on campus? Join the club! 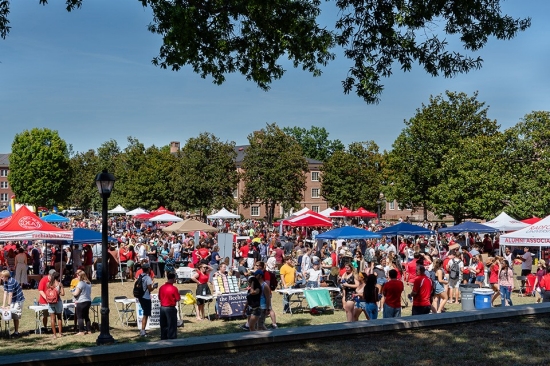 Drew Reavis found a shade tree on the perimeter of Moffett Lawn, devoured a pizza slice slathered with caramel and talked with his friend, James, about the tables they were going to visit next at Club Fair.

Earlier in the day, Reavis, a freshman from Woodlawn, Virginia, was given a list of the clubs and organizations that would be on hand for the biannual celebration of student involvement.

“I saw the Chemistry Club and the STEM Club on the list and those were two things that piqued my interest,” Reavis said. “I actually signed up for both of those clubs today.”

Joining clubs, however, did not stop there for Reavis, whose career plan is to be an anesthesiologist.

“There is a Pre-Med Club here, too. I didn’t know there was such a club, but I found it walking around and signed-up. That club will help me get better connected,” he said, trying not to drip caramel on his tan T-shirt that reveled his affinity for science.

“Lose an electron? Gotta keep an Ion it,” the shirt read.

Reavis’ friend, James Dalton of Hillsville, Virginia, had arrived minutes earlier and was looking for clubs and organizations that fit his interests in psychology and “particularly body language,” he said, with his head seemingly on a swivel, taking in the stunning scene of thousands of students exploring the more than 200 groups represented on Aug. 30 event.

A variety of representatives sat and stood at tables, speaking with curious students and handing out literature. Some of the lucky ones were under tents on the blazing hot, 86-degree day. They encouraged students to leave their contact information on sheets of paper.

“Join The Tartan,” senior Jeremy Moser of Danville, Virginia, urged passersby, handing out fliers touting the student-run newspaper. “Writing for The Tartan helps you become a better citizen of the campus by reporting what’s going on,” he said later.

A couple of tables to Moser’s right, senior Tyler Martin of Alexandria, Virginia, was recruiting students to join the campus radio station, WVRU. “We have lot of jobs,” said Martin, the station’s student operations manager. “There is something for everyone.”

A few feet in front of Martin, standing upon the Moffett Lawn stage, a student a capella group serenaded the crowd with the lyrics of “Everybody’s Looking for Something” from an Eurythmics classic. Meanwhile, Julian Threat was looking for something specific, a club that fused with his interests in audio production.

“Anything with music in it,” said the junior from Woodbridge, Virginia, “I want to get my degree in production technology, so I’m looking for a club of like-minded people, to get to know them. I’m sure I’ll find something; there are a lot of clubs here.”

One of the longest Club Fair lines was at the information table for Radford University’s chapter for College Mentors for Kids.

“We have three sheets filled out already,” said Chapter President Alona Wilkin, revealing the interest the club was receiving about halfway through the three-hour event.

College Mentors for Kids gives local school children an opportunity to team up with and see firsthand the experience of being a college student.

“We work with Belleview Elementary School in Montgomery County. Every Wednesday, students from the school come to campus and do activities with college students,” explained Wilkin, a senior education major from Suffolk, Virginia. “We have guest speakers, who are college students from different majors, and they talk about their majors and career plans. And, then we do activities with the kids.” 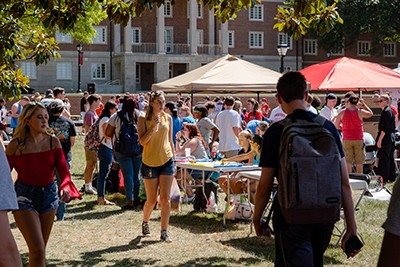 In addition to the plethora of clubs and organizations represented, Club Fair offered students many other perks, like free pizza, drinks and snow cones – “It’s hot, and we really need a snow cone,” joked Emily Morgan, standing in a long line for a cone with her Delta Zeta sister Kaylyn Mackey.

There were local vendors and carnival rides, too. The atmosphere was festive—footballs and Frisbees occasionally zipped through the air – with a buzz and excitement of meeting new people and finding friends and opportunities.

Still, there was business to tend to, or in the case of SMIPO, staffing and running a student-run investment organization that manages nearly $2 million for the Radford University Foundation.

Tim Harris, the president of the organization, sat in the sun and fielded questions from interested students. “We have a few people who will be graduating in the spring, so we’re looking for new members,” said the senior from Hampton, Virginia. “We are looking for anyone who has an interest and a passion for learning about the stock market.”

While SMIPO was recruiting the finance-minded, two tables to their right, Reed Boschen, of Richmond, Virginia, and Ben Mitchell, of Virginia Beach, Virginia, were pitching their newly formed club that has far less responsibility, but perhaps, can be just as exhilarating: Thursday Night Mario Kart.

Boschen and Mitchell, both sophomores, are just getting the Nintendo Club up and running after developing the idea last spring, while eating at the Bonnie. “Starting a club was just a joke at first, but after we completed all the paperwork, we thought, ‘Wow, this could actually happen,” Mitchell said.

At the fair, the Nintendo Club was a smash.

There was lots of bustle around the table, sign-up sheets were filling up fast for a club that plans to explore decades of games from the Game Boy to current systems.

“We just wanted to create a hub, not just for gamers, but for people who have an interest in Nintendo,” Boschen said, “and share what they have going on, share their stories…”

He stopped in the middle of his explanation to answer the second most asked question students had that day about the club: When is the first meeting?

“Thursday at 7:30,” Boschen answered again with enthusiasm that persisted throughout the event. “See you there.”