At the start of the Fall 2019 semester, three College of Humanities and Behavioral Sciences (CHBS) faculty members were honored for their dedication to teaching, research and service.

The awards are bestowed upon deserving faculty annually at the beginning of the academic year. For the 2019-2020 academic year, an award for outstanding service was presented for the first time.

One of the CHBS traditions during the presentation of awards is that the winners are not notified until the award is presented, giving intrigue and suspense to the event. For French, the announcement was a “complete surprise.”

“I was sitting next to Professor [Kim] Herbert, and Dr. [Jack] Call was reading the introduction,” French said. “All of a sudden, I recognized two phrases from my teaching philosophy, and I looked at Kim and I said, ‘Oh my gosh, I think they're talking about me.’ Then, I looked to my left, and I saw that Dr. [Lisa] Baker-Webster was recording it, which was a beautiful and kind thing to do.” 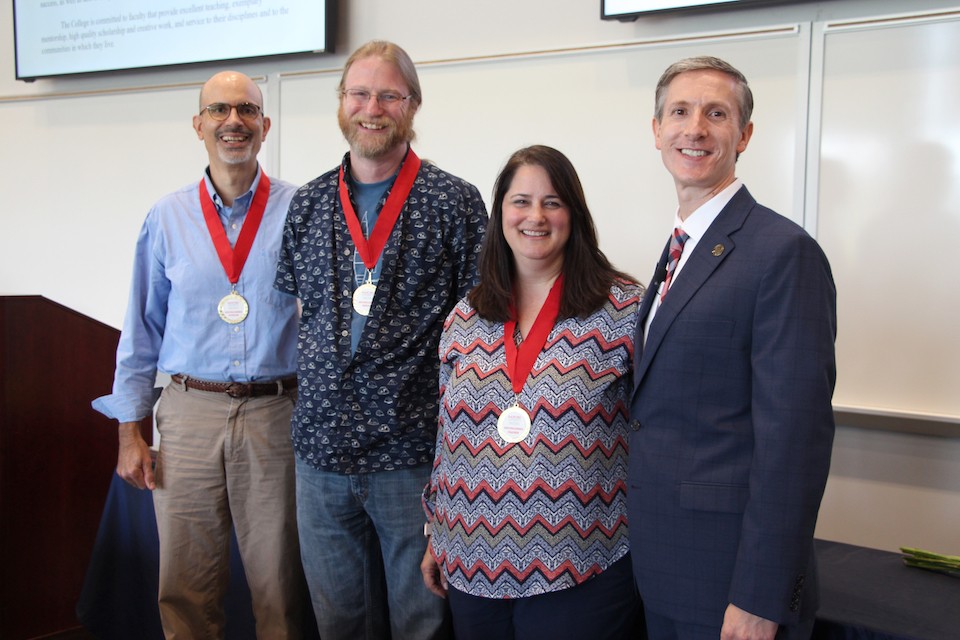 Last year, Oyos released a book covering the iconic President Theodore Roosevelt. Oyos’ book, titled “In Command: Theodore Roosevelt and the American Military,” was an idea that came about during Oyos’ time as a graduate student. To complete his book, Oyos traveled around the East Coast of the United States to read and study Roosevelt’s writings. Most of Roosevelt’s official works are housed in the Library of Congress and the National Archives, but his private papers and letters are in the Harvard Library. For his research efforts, Oyos received the Outstanding Research Award.

“It signifies the climax of a number of projects coming together at once, and it’s very gratifying to receive this kind of recognition,” Oyos said.

Oyos received another award for his efforts in writing his book. In late October, Oyos will receive the Roosevelt Prize from the Theodore Roosevelt Association.

Winning the inaugural outstanding service award was gratifying to Aspelmeier, who said receiving the award was “was intimidating but also really exciting.”

Psychology Professor Ann Elliott, Ph.D., presented the award to Aspelmeier, who only recognized that it was him when Elliott mentioned “spreadsheets.”

“I was actually kind of emotional when Dr. Elliott present the award to me,” Aspelmeier said. “It really did mean a lot. It really did.”

Through the presentation of these incredible awards, CHBS recognizes faculty for their outstanding achievements both inside and outside of the classroom.