One trip to rule them all 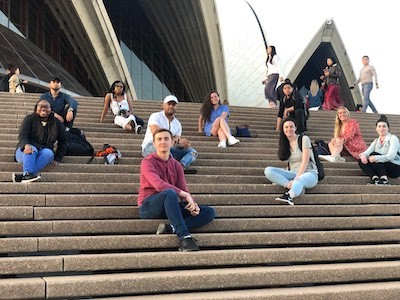 Over the summer, students and professor took a study abroad trip of a lifetime to the “Land Down Under,” providing students with a transformative international education.

Ten students made the trip with School of Communication Professor Matthew Turner, Ph.D. During the month-long excursion, students were able to see Australia and New Zealand, with four students staying an additional five weeks for internships in the region.

“We were able to have a great trip,” Turner said. “It was a mix of experiences that pushed students outside of their normal comfort zone and capabilities that gave them more confidence about themselves.”

Turner feels it is critical that students see the world firsthand – in other words, he wants students to get outside of the four walls of a classroom. He wants them to experience other cultures, including teaching the students the Haka, a ceremonial war dance in the Māori culture.

“I don’t lecture much at all on the study abroad,” Turner said. “We do things in the field. Radio is a part of the study abroad. Instead of me lecturing on radio in New Zealand, we went to a New Zealand radio station and watched them do a live show.”

Alex Kinsey, a communication senior from Northern Virginia, found the trip to be incredibly rewarding both personally and professionally. Kinsey interned with a company within the tourism industry. There, she helped visiting students find work and assisted them with all aspects of their stay.

During her internship, Kinsey created a cohesive software platform to manage all aspects of her job that entailed support for international tourism students, from helping them find transportation to places to live. The platform was also easily transferable from intern to intern. 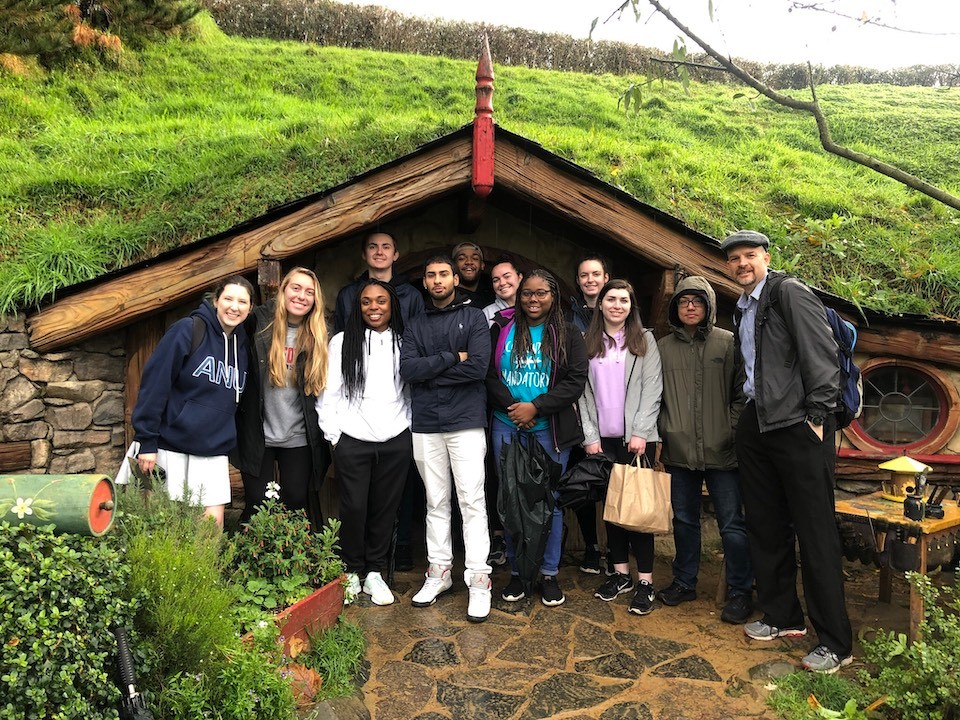 The study abroad group visited the set of the movie trilogy "The Lord of the Rings" and is pictured in front of a Hobbit Hole in Hobbiton.

“By creating that, made it a lot easier to balance my classes and my work, as well as anything else I want to do because I now have a system that works for myself,” Kinsey said. “I've already seen a difference. I don't feel stressed.”

Some aspects of the culture of New Zealanders were different for Kinsey. In Auckland, New Zealand, there is the Auckland City Sky Tower, which stands 1,076 feet tall. The tower is a telecommunications and observation tower, but the Sky Tower also offers a SkyWalk and a SkyJump from 630 feet above the city sidewalks, from which guests can bungee jump in the center of a busy city.

“I decided I was going to do it,” Kinsey said. “When you go to jump, you think, ‘I have to step off the building.’ Every part of your instinct is telling you, ‘What are you trying to do? You're not going to step off a building,’ But you do. Would I do it again? Probably not. It was absolutely terrifying. But it was so much fun.”

Chase Wayne, a production technology senior from Mooresville, North Carolina, interned for the Institute for Strategic Leadership in Aukland. In his internship, Wayne assisted with the creation of videos to promote the company’s products.

“I was able to figure out what kind of person I am in the workforce,” Wayne said. “I’m able to go with the flow and I don’t get rattled by deadlines.”

As an avid movie fan, one of Wayne’s favorite parts of the trip was visiting the locations where popular movie scenes were shot.

New Zealand is also a popular destination for filmmakers because of the exotic terrain and varying landscapes, with films such as “The Last Samurai,” “Wolverine,” “Mission Impossible: Fallout” and, perhaps the most well-known, “The Lord of the Rings” trilogy. The Radford study abroad group visited some of the sets used in the filming of “The Lord of the Rings.”

“I'm a huge Lord of the Rings Fan. I love everything that goes with it,” Wayne said. “One of my favorite childhood shows was Power Rangers and that was filmed in New Zealand.”

Through this study abroad experience, students saw different cultures firsthand and brought back memories of a lifetime, returning ready to excel in both the classroom and beyond.