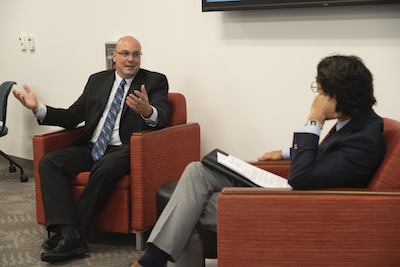 The Fall 2019 Prelaw Society event at Radford University is known for bringing in top-notch speakers, and by bringing in Donald W. Martin Jr., J.D., the tradition continued on September 17.

During the hour-long discussion, hosted by Associate Professor of Criminal Justice Luke William Hunt, Ph.D., J.D., held in the College of Humanities and Behavioral Sciences Building, current legal and political matters were discussed in a room packed with students, faculty and community members.

“These events are important on a number of levels,” Hunt said.  “Not only are students hearing about public issues from people with firsthand experience, they are also learning about all of the interesting things one can do with a law degree.”

Martin recently concluded his post as general counsel for the Senate Select Committee on Intelligence, which is chaired by Senator Richard Burr, from North Carolina, and vice chaired by Senator Mark Warner, from Virginia. In that role, Martin advised Burr, as well as committee members and staff, on legal issues relevant to the committee and provided other legal guidance. Prior to that role, Martin served as the assistant general counsel for the Central Intelligence Agency (CIA), where he advised and trained intelligence operators and managers about legal matters, among other duties. Martin also served as an associate attorney for McGuireWoods LLP for nine years.

“What I really like about the Senate Select Committee on Intelligence is that I think it is the most bipartisan committee on the Hill,” Martin said. “Chairman Burr and [Senator Warner] have done a great job leading that committee in a hyper-partisan time. I was proud to work for them.”

One of the topics discussed during the informative and enlightening discussion was use of social media and sources of misinformation. 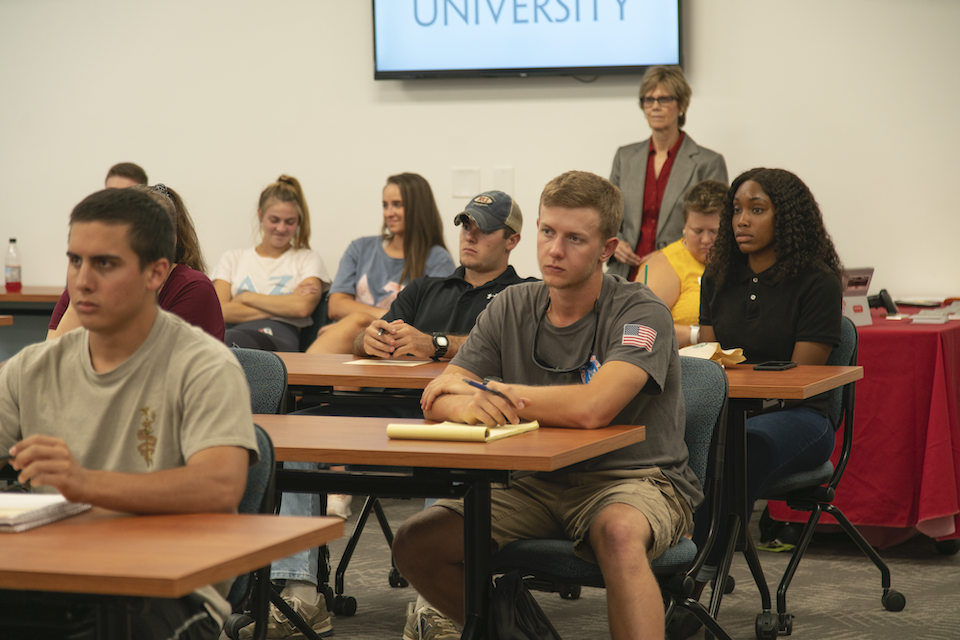 Society needs to be critical of what it ingests, Martin said. “We have to be the most critical of the things we agree with. That’s when our guard is down.”

As a lawyer for the CIA, Martin told the students that he worked firsthand with the agency’s officers, often providing them with legal guidance, just as he had with clients throughout his career.

“The CIA officers want to get the job done. But, they know they need legal approval,” Martin said. “They wanted to do their job…and they came to me, because they wanted to do it in a way that’s consistent with U.S. law and rights.”

Hunt also raised the recent news of a trial date being set for the defendants in the 9/11 terrorist attack case.  A U.S. military court judge in Guantánamo Bay, Cuba, recently set a trial date for Khalid Sheikh Mohammed and the other four men charged with plotting the terrorist attacks.

“Don worked for the CIA, and I worked for the FBI,” Hunt said.  “From a legal perspective, the 9/11 case draws out some of the differences between those two agencies—though both agencies have the goal of justice in mind.  Part of the trial’s delay is sorting out the evidence obtained from the CIA and the FBI - which each have different missions and tactics - and determining what is admissible in a U.S. courtroom.”