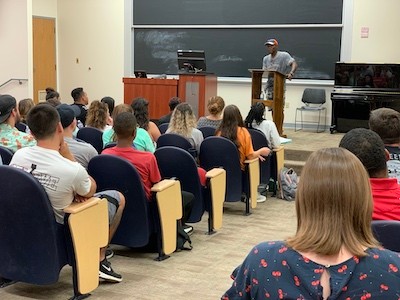 Ricky Jackson is not your typical guest speaker. At the time of his exoneration, Jackson was the longest-serving person to be fully exonerated of all crimes. On Oct. 2, Jackson visited the Radford University campus to share his personal journey with students, faculty and staff in the packed auditorium of McGuffey Hall.

Jackson detailed his ups, his downs and what motivated him to continue the work that ultimately earned him his exoneration after serving 39 years in prison. During his period of incarceration, he spent four years on death row and only had his sentence commuted to life in prison two weeks before his scheduled execution. Students had the opportunity to ask Jackson questions during the nearly hour-and-a-half-long event.

To Armel, hearing Jackson’s talk emphasized the importance of being careful. “If I heard that story, I would’ve assumed he deserved the punishment he was getting. I wouldn’t have thought twice about it,” Armel said. “This makes me want to think twice [in the future].”

In 2011, Cleveland Scene magazine outlined Jackson’s case, particularly with inconsistencies surrounding a key witness testimony. Shortly thereafter, attorneys with the Ohio Innocence Project filed a petition for a new trial on Jackson’s behalf. In November 2014, Jackson’s charges were vacated, and he was fully exonerated.

Jackson’s guest appearance is a part of a course, titled “Death Penalty in America,” taught by adjunct instructor Todd Jones ’88, M.S. ’94, in which students discuss various topics and Supreme Court decisions that have shaped the use of the death penalty.

“[Mr. Jackson] is amazing. He allowed us to see what life was like in his shoes for the evening,” said Falyn Taylor, a criminal justice senior from Washington, D.C. “Thirty-nine years is a long time. I don’t know how he was able to persevere through that. I wouldn’t have been able to. It’s a blessing that he is able to do programs like this.”

Jackson says he feels blessed in many ways: “I got my life back, and I am grateful for everything I get to see. I get up at 5:30 every morning. I like seeing the sun come up. I like being the first one up. I like sipping my coffee with my dogs. That’s heaven to me.”

Jackson said that he wrote “anyone and everyone” that would listen to him while he was in prison.

“All my money went to stamps and envelopes. I needed someone to hear me and to listen,” Jackson said. “You find a way. You find something through the day that gives you the spark you need to keep going through the rest of the day. Yeah, I was in a bad place. But giving up, I just couldn’t do it.”

During his time in prison, Jackson was not just focused on justice for himself. He never forgot the victims of the original crime.

“The man that died and lost his life, what about his family? They never got justice,” Jackson said. “Nobody in any official capacity went to them and said, ‘We’re sorry.’ They turned their backs and walked away.”

As part of the course, “Death Penalty in America,” Jones wants his students to take an investigative eye to the use of the death penalty. “I really want our students at the University to hear from somebody who was caught up in a mistake in the criminal justice system and how we finally rectified that,” Jones said.

“My purpose in having Ricky Jackson here tonight is to look at all aspects of the death penalty,” Jones said. “We have made mistakes in the past. Since 1976, we have exonerated 166 people off of death row. If we don’t look at where have been, we can’t make progress for the future.”

Nearing the halfway point of the semester, students have discussed a variety of facts surrounding the death penalty, including the Supreme Court touching on the issue, if the death penalty’s use is constitutionally sound and more.

Jackson’s appearance and engagement with the Radford campus exemplify how students are provided opportunities for a fearless exploration of knowledge in all its forms.