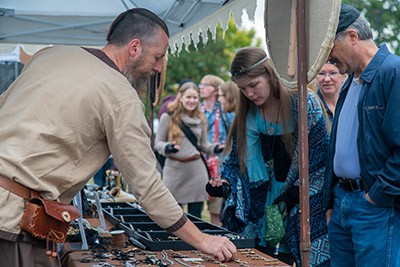 Guests explore one of the many vendors at the Highlanders Festival.

The traditional sound of Celtic music marked the triumphant return of the Radford Highlanders Festival to Radford University’s campus on October 12, 2019, returning back home after being held off-campus in recent years.

The crowds were greeted by a cool morning that warmed into a perfect fall day for the thousands of guests in attendance. Food trucks, some with authentic Celtic fare and others with traditional festival food, were enjoyed by visitors, as were Scottish Highland games, traditional pipes and drums, music and merchants.

“It’s a really cool event! And, it’s right here on campus,” said Daniel Meany, a sophomore from Christiansburg, Virginia. “There’s a lot to see here. There are so many booths here, and everything is so unique.”

The first thing that greeted Meany was the sheepherding. “I came up the stairs by Muse Hall, and there was a group of sheep just standing there. Then, I saw the dogs herd them.”

For Lindsay Winn ’09, the festival marked a return home. Winn was able to see the new additions to campus, while also enjoying a sense of nostalgia for her alma mater.

“It’s so great that the wonderful tradition continues to be such a well-attended event,” Winn said. “It’s great to walk around and see familiar faces and see all the Radford spirit on campus.”

Scottish Clans are an essential element of the festival, and, for the first time Debbie MacFarlane Webb and her husband, Charles ’83, representing the International Clan MacFarlane Society, attended the Highlanders Festival. Each clan has their own family tartan, and MacFarlane is the official tartan of Radford University, which made their attendance all the more exciting. 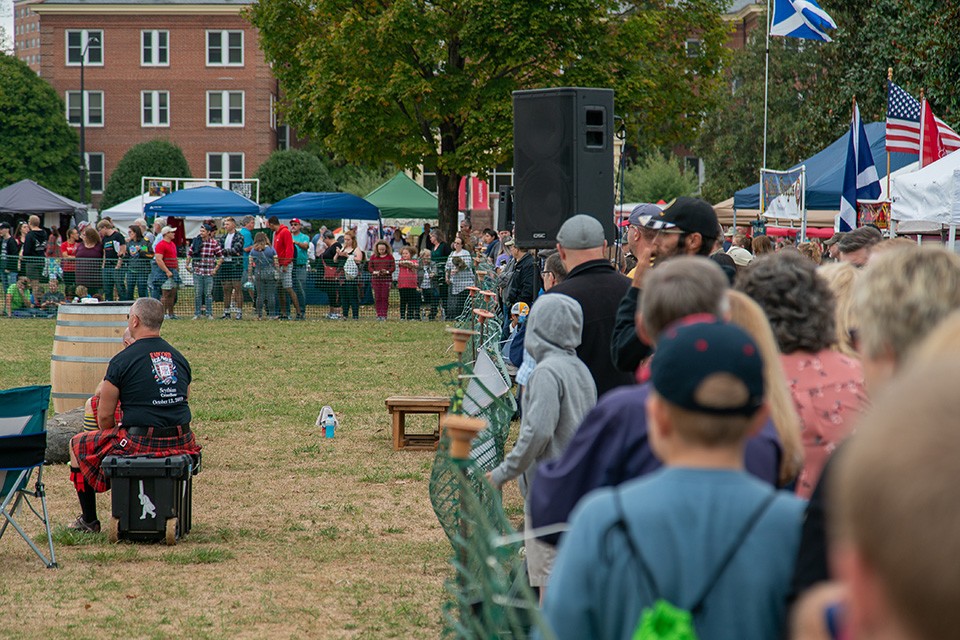 A crowd gathers to watch the Highland Games.

Founded by first-generation sons of Ukrainian immigrants, brothers Alexander (Alex) and Danylo (Dan) Fedorkya’s band had modest origins; they started out as street performers. Fast forward 15 years and Scythian has played more than 2,000 shows both in the United States and abroad.

Dan Fedorkya said that the legacy of Celtic music drew them into the genre. “It is like a seamless fabric that goes back to the beginning of time,” Fedorkya said. “There’s this sense of timelessness to it and conveying it in a pop culture age, in a way that young and old alike can participate, was and still is, a challenge to us and it really gives us a lot of satisfaction during our performances.”

Since their last appearance at the Highlanders Festival, Fedorkya said they are “exponentially better” as a band.

“We’re excited that we were able to share some of our new tunes,” Fedorkya said. “We’re thankful that we were asked to come back. We’re Virginia boys, so it’s nice to have an in-state show.”

CrossBow also played on the main stage, making the trip down from Michigan, withorigins are traced back to their time at Grand Valley State University. 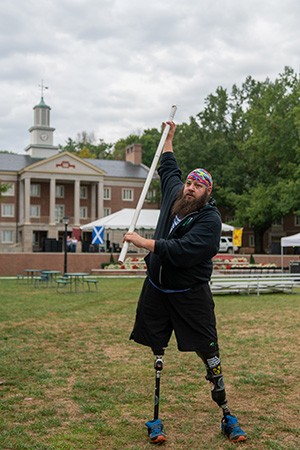 Matthew Hall MSW ’03 stretches before competing in the Highland Games.

A staple of the festival is the Tom Raisbeck Memorial Games, which has historical roots with Irish origins reaching back to around 2000 BCE, pre-dating the Olympic Games. Modern-day events pay homage to the history, through the intense and exhilarating competitions.

Jonathan Harding of Austinville, Virginia, continued his dominance at the Tom Raisbeck Memorial Games at the Radford Highlanders Festival, winning the men’s A division for the fourth consecutive year. He won a hotly contested six-player field in which just four points separated the top three finishers. Thorbjorn Gylfason of Greenville, North Carolina, finished second, and Pete Warmingham of Knoxville, Tennessee, rounded out the top three.

Salem’s Matt Hall, M.S.W. ‘03 participated as a demonstration athlete in the men’s adaptive class. At six months of age, Hall had both of his legs amputated, but that only increased his drive to compete.

Hall did not just compete at the Highlanders Festival – he set records in the process.

“I’m not out there just to be out there,” Hall said. “If you have a competition, I’ll be there. We’re working on getting some elite tracks for adaptive athletes in place, in the near future.”

Hall got his first taste of the Highland games when he was a student at Radford University, while living in Washington Hall. 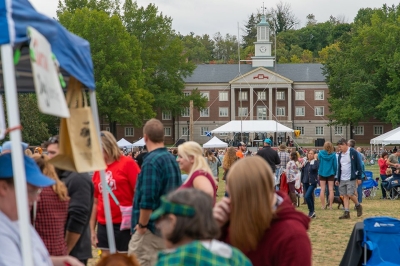 “It’s always fun to compete at home,” Hall said. “It’s nice to be at home and back on campus.”

Terry James also challenged records in the women’s master class as a demonstration athlete. Wes Kiser of Greensboro, North Carolina, joined the 26-person field as a demonstrating professional athlete after finishing fourth at the U.S. Nationals, held at the recent Celtic Classic in Bethlehem, Pennsylvania.

“It was a great day of competition in a great setting,” said Athletic Director of the Raisbeck Memorial Games Chad Clark, who was assisted by judges Bob Hicks and Jen Mayrich.

Emily Suiter, a senior from Blacksburg, Virginia, helped with the preparation of the yearly event.

“I’ve done some festival work before, but I haven’t seen the inner workings before,” Suiter said. “There are so many working parts, even for a one-day event. I assisted with volunteer coordination and was the student engagement ambassador.”

The Radford Highlanders Festival is an ongoing partnership between Radford University and the City of Radford. People from within the University community and from the City of Radford work diligently to organize the Highlanders Festival annually. Their efforts yield unique experiences and special memories for families, students and community members.