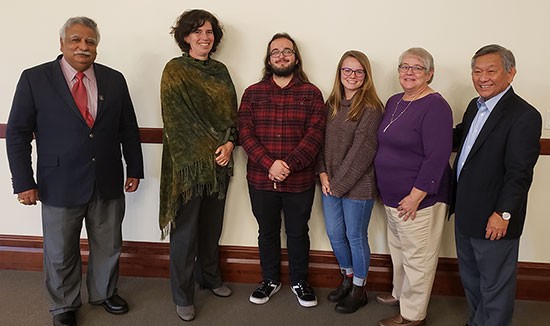 Radford University students and faculty members convened on October 16 for a 2019 World Food Day panel discussion that examined an important issue that touches significant portions of the world’s population: the role diet and nutrition play in achieving zero hunger.

Each year, Radford University’s Department of Economics hosts an event to coincide with numerous World Food Day events held throughout the United States and in various countries. Globally, the day is organized by the Food and Agriculture Organization (FAO) of the United Nations to create awareness and increase action in support for individuals who suffer from food insecurity and hunger.

Associate Professor of Economics Kiert Toh, Ph.D., moderated the event that featured presentations from two students and two faculty members. There presentations examined hunger, diet, nutrition and poverty in Southwest Virginia, the Commonwealth, the United States and the world.

Presentations focused on the magnitude of the problems, as well as programs available to help eliminate hunger by 2030.

In an examination of Southwest Virginia, senior Emily Jenkins described the issue of food deserts, or “areas where people cannot access affordable and nutritious food and do not know where their next meal will come from.”

“This reality,” said Jenkins a political science major from Radford, “stems from the issues of poverty and the lack of access to transportation, and in some cases, impoverished areas without local grocery stores or local food markets.”

Jenkins urged those attending the discussion, which was held in the Davis College of Business and Economics, to take action by volunteering and donating resources to help people in need in Southwest Virginia where food insecurity rates average between 15 and20%, she said.

Assistant Professor of Economics Jennifer Elias examined the role of Virginia farming and spoke of the current farm-to-fork trend, which has led to sales that have increased from $11 million in 2002 to more than $100 million in 2017, she said, despite decreasing farm size in the Commonwealth.

Farm-to-fork addresses the pillars of food security, Elias said, but begs the question of whether “the movement is amplifying hunger on a larger scale since these small farms may be unable to meet the needs of a growing population locally, much less the help assuage to much larger problem of world hunger.”

Gabriel Bennett, a senior political science major from Blacksburg, also explored the concept of food deserts, and how it can link food insecurity with obesity.

In “areas where healthy, fresh food is unavailable, people often have to rely on unhealthy staples to be able to eat,” Bennett said. “Poorer families often must consume these foods instead of healthier options.”

Presenting on the international perspective, School of Nursing Interim Director Iris Mullins, Ph.D.,, said severe food insecurity has increased around the world since 2015, despite relief efforts from other countries.

World Food Day was established by the FAO in 1979 and was first observed in 1981. Radford University Department Chair and Professor of Economics Prahlad Kasturi, Ph.D., has been organizing the annual campus event since 1991.