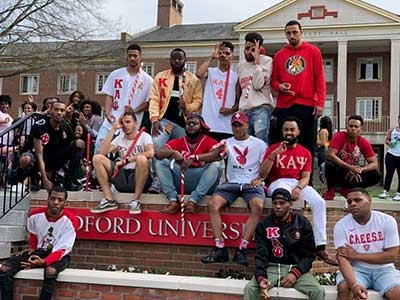 On a typical weekday, the fleet of Radford Transit busses are full of busy students scurrying across campus. This holiday season, a Radford University fraternity has devised a plan for a different clientele to fill the seats.

Members of the Rho Theta Chapter of Kappa Alpha Psi Fraternity, Inc. have organized the inaugural “Stuff the Bus” toy drive as a creative and caring way for Radford University to give back to the local community.

The goal is to stuff an entire Radford Transit - a 35-foot-long bus - with dolls, bikes, action figures and games galore. While the goal is ambitious, said chapter President Marc Mitchell-Collins, the mission is simple: “to make someone’s Christmas special.”

The fraternity is asking for donations of new, unwrapped toys that will be distributed to children at Belle Heth Elementary School in Radford. They will also accept shelf-stable food items, such as canned fruits and vegetables, peanut butter and macaroni and cheese, to restock a food pantry at Belle Heth.

Donations can be dropped off on November 21 from 1 to 3:30 p.m., either on campus in The Bonnie Hurlburt Student Center (The Bonnie) parking lot, or at the Walmart location in Fairlawn.

The drive is important to Rho Theta, a small-in-numbers yet mighty-in-spirit brotherhood of eight men, who have been especially active in community service since they formally established just a few years ago. Chartered in 2014, the fraternity has quickly made its mark on Radford University’s campus and the surrounding community.

“But, we’re also always trying to think ‘out-of-box’ and how we can inspire service in other ways,” Mitchell-Collins said.

Through an ongoing partnership with Belle Heth, chapter members visited the elementary school regularly this semester to mentor young students during their morning breakfast hour. During the visits, they practiced communication skills, discussed the importance of a college degree and connected at a level that impressed Belle Heth Principal Tara Grant M.S. ’03, M.S. ’09.

“I was very inspired by the men’s enthusiasm and encouraged by their willingness to get up so early to engage with our students,” Grant said. “Hearing them share their personal experiences and relate to one another was powerful.”

With a predominantly African American membership, Mitchell-Collins said it was particularly important for Rho Theta to connect with minority students and for those students to “see us being leaders in the community.”

The upcoming toy drive is the brainchild of Rho Theta chapter member Travon Selby, a senior marketing major on track to graduate in December 2019.

As the group’s guide right chairman, or community service coordinator, Selby is continually looking for ways to connect with the broader community. So, in mid-October, he began planning the toy drive, one he hopes will be his lasting legacy as a Radford University Highlander.

His passion for the philanthropic act ignited during a recent visit to Belle Heth.

Selby, of Norfolk, Virginia, spent time in the foster care system from age 12 to 17. During one of the chapter’s morning visits to the elementary school, he connected with a young student sharing in the same life circumstance.

“I thought, ‘I want to give him the best Christmas present,’” Selby said. “And, I’m going to.”

Throughout the past several weeks, Selby has put his marketing skills, gained from some of Radford University’s outstanding professors, to the test. He has created flyers and banners to advertise the event and flooded social media with the news. Through several contacts in the Division of Student Affairs, he formed the integral partnership with Radford Transit.

With the drive now less than a week away, Selby said he is excited to see his ambitious vision come to life. It has been a lot of work he admitted, but he has received a lot of support along the way. More than 20 Radford University student clubs and organizations have pledged to donate to the cause.

“I am grateful for the student body coming together to support this,” Selby said. “I hope this is something that will continue after I graduate. I’m proud of myself, and I’m proud of my fellow Highlanders.”

“Philanthropy and community service are our core values,” Steiner said. “We hold these values in high regard, and we are always looking for ways to give back to the community that is continually giving back to us.”