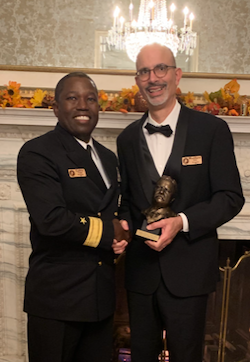 When Radford University Professor of History Matthew Oyos, Ph.D., published his book on Theodore Roosevelt’s influence on the modernization of America, he did not think it would land him a trip to Long Island to receive an award from the Theodore Roosevelt Association.

In late October, that is exactly where he found himself. Years of long work and dedication to research earned his book, titled “In Command: Theodore Roosevelt and the American Military,” the prestigious 2019 Annual Book Award from the Theodore Roosevelt Association.

“It was an honor to have my book highlighted in this way among the large corpus of scholarship on Theodore Roosevelt,” Oyos said. “Many people stand behind a work of scholarship and deserve acknowledgment, from archivists and librarians who offered their expert knowledge of resources, to university officials who provided research assistance, to editors who provided a keen eye and sage advice. Most of all, I want to thank my wife and children who had to put up with Theodore Roosevelt as a guest in our house for so many years and for offering their patience and support.”

As part of his research on Roosevelt, Oyos traveled to the Library of Congress and the National Archives, as well as to Harvard Library, as not all American presidents have libraries.

“Awards, such as the one I received from the Roosevelt Association, encourage the continued pursuit of such knowledge, and as an accomplished historian himself, Roosevelt understood the need to grapple with the past, so that we can have a surer compass to chart the present and prepare for the future,” Oyos said.

The dedication to this research also earned him the Radford University College of Humanities and Behavioral Sciences award for outstanding scholarship.

Faculty members, such as Oyos, underscore the dedication of Radford University’s faculty members to research and academic excellence, while furthering the boundaries of their respective fields.