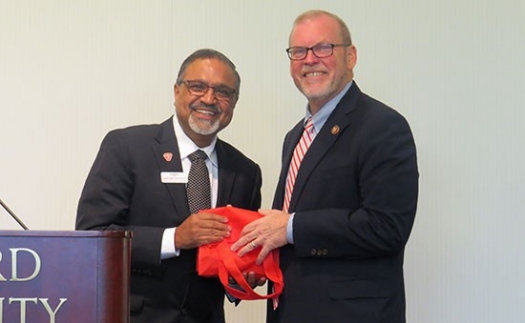 Griffith, who represents Virginia’s 9th District, briefly addressed issues important to Southwest Virginia and the Commonwealth, particularly healthcare and telemedicine, before spending most of his time answering questions posed by Radford University students.

Following the talk, Davis College student Brandon Adams, a senior finance major from Suffolk, Virginia, posed to the congressman a series of questions submitted by faculty and students from Davis College. Many of those questions focused on healthcare costs and needs for rural areas, while others addressed retaining talented workers in Southwest Virginia, climate and solar energy, and gun control.

Once he addressed students’ questions, Griffith answered a couple of audience questions that also centered on gun control, as well as mental health reform.

Davis College Dean Joy Bhadury, Ph.D., called it an “honor and a pleasure” to host the congressman as the speaker for the lecture.

“Congressman Griffith’s thoughtful responses to all the questions, and discussion of various ideas being debated in Congress, were sincerely appreciated by all of us in the Davis College. He addressed some of the salient societal issues being faced by us in Southwest Virginia,” Bhadury said. “We are very grateful to him for having taken the time from his schedule to visit and converse with us.”

Before his election to the U.S. House of Representatives, Griffith was a member of the Virginia House of Delegates, representing the 8th District from 1994-2011. He was elected House Majority Leader in 2000.

Griffith is a graduate of Andrew Lewis High School in Salem, Virginia, Emory & Henry College and the Washington and Lee University School of Law. He practiced law in Southwest Virginia for almost three decades. 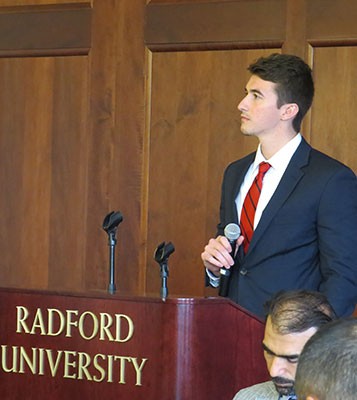 “We get to meet a lot of business professionals, who are high up in their companies and are very successful,” Backus said. “Many of them were in my place – a college student – and they come back to campus to spread their wisdom to us. And, today, I got to meet a congressman and talk to him personally.”

“These opportunities, like the one today, definitely make me feel like the people in the Davis College are watching out for me and want me to succeed,” Backus said. “That’s definitely the feeling I get in the Fellows program and through events like this one today with the congressman.”

Griffith is among the many eminent speakers invited to share their ideas at the semi-annual symposium, which is designed to encourage and inspire thought and discussion about capitalism, the tenets of free enterprise and the best practices of successful businesses and organizations. The Global Capitalism Lecture Series is underwritten by a gift from BB&T to the Davis College.