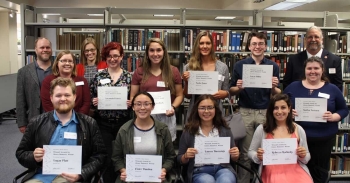 The finalists and winners of the 2019 Winesett Awards for Library Research were honored on April 26 at a special ceremony in McConnell Library.

Funded by the Hazel Grove Winesett Endowment and administered by the Radford University Foundation, the awards are made annually at the end of the spring semester to recognize the academic year’s most creative and original library research by undergraduate students.

Top prizes are granted to the students with projects that best illustrate the use of McConnell Library’s valuable tools and available resources.

“We received many amazing applications this year, with thoughtfully written and reflective essays describing the library’s role in strengthening research skills,” Archer said. “We reviewed wonderful projects, fully displaying the creativity, persistence and thought-provoking topics in which our Radford University students are engaged, and saw the enthusiastic support and mentorship of our faculty for their students.”

The annual library research contest was named in honor of 1938 alumna Hazel Winesett, a lifelong educator from Pulaski, who is remembered as a woman with a warm and modest heart and a love for traveling. Upon her death in 2002, Winesett left the McConnell Library an $820,000 endowment, the largest such gift to-date that the library has received.

Her gift provides an opportunity for the library to implement many projects, including the Winesett Awards. In addition to the annual library research award contest, the Winesett Endowment has been utilized to help fund numerous initiatives, such as expanding resources, upgrading furnishings and equipment and establishing the McConnell Library Archives and Special Collections' annual Winesett Book Collecting Contest.

Copies of this year's prize-winning papers will be permanently housed in the McConnell Library University Archives and can be digitally accessed online from the Winesett Awards for Library Research Collection Archives.