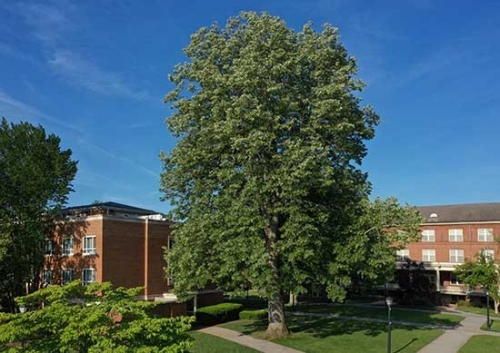 The white basswood located at the north end of Jefferson Hall has been recognized as a national champion tree by American Forests magazine.

It’s the white basswood located at the north end of Jefferson Hall, facing McConnell Library and the College of Humanities and Behavioral Sciences Building. The tree has been recognized as a national champion by American Forests magazine's Champion Trees national register.

Champion trees are the biggest of their species, as reported to American Forests, a conservancy organization that works to protect and restore forests ecosystems.

The white basswood – Tilia americana var. heterophylla for its scientific name – has been a reigning Virginia state champion for a decade after being nominated by special purpose biology instructor John Kell. Last summer, Eric Wiseman, of the Virginia Big Tree Register, measured and updated the Radford tree’s statistics, and reported that is “in good health.”

American Forests used Wiseman’s measurements in an algorithm to award points to the tree based on measurements. The white basswood is 90-feet tall, 186 inches in circumference and has a crown of 81 feet for a total of 296 points. It was declared a national champion tree in September 2018.

“It surpassed the previous champ at 266 points,” Kell said. “So, our tree may remain champion for quite a while.”

St. Louis is home to the previous national champion tree.

The Radford University white basswood is “the largest known tree of its species” in the United States, according to American Forests magazine.

The white basswood is a variety of the American basswood, said Kell, who teaches Virginia flora classes at Radford University. Its range spreads mostly in southern Appalachia, and extends south into Florida’s panhandle and along the Ohio River into Missouri.

“I'm happy to see our basswood being recognized as a champion tree. Trees like the basswood are what I like to call ‘charismatic megaflora,’" said Stockton Maxwell, an associate professor in the Department of Geospatial Science whose research focuses on forest ecology and dendrochronology. “These trees really add an aesthetic to the campus that only comes with time.”