Radford University celebrates the Class of 2019 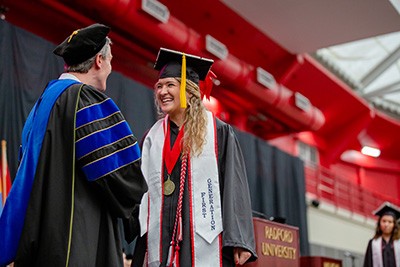 CHBS Interim Dean Matthew J. Smith shakes an alumna's hand as she walks across the stage.

Due to inclement weather conditions, Saturday’s Main Commencement Ceremony on Moffett Lawn was moved indoors and divided into individual college ceremonies. However, the persistent rain showers did not dampen the spirit of the Radford family.

The first ceremony on Saturday was the Davis College of Business and Economics in the Dedmon Center. Prior to the event, friends, Virginia natives and members of the Student Managed Investment Portfolio Organization (SMIPO) Cage Dix, of Drakes Branch, James Mott, of Stafford, and Justice Vivero, of Burke, gathered in the atrium, beaming with excitement.

“We’re all just ecstatic,” said Dix. “And, a little relieved.”

The trio met through SMIPO, a student organization that manages endowed funds for the Radford University Foundation, Inc. The organization, jump-started by the Foundation with an initial investment of $100,000, has since grown its portfolio to approximately $1.75 million, a fact that Mott’s mother was excited to point out.

“I am very, very proud of these young men and all that they’ve accomplished,” said Jacqueline Mott. “The fact that all three have secured jobs with powerful and well-known companies is just amazing.”

Dix will soon start his career at Deloitte, one of the top accounting organizations in the world. Mott has already started his job at Booz Allen Hamilton, an American management and information technology consulting firm. Vivero is going to be a stockbroker with DMG Securities, Inc., a full-service securities brokerage firm.

Caps secured and proudly adorned in regalia, the men soon joined fellow graduates on the floor for the formal commencement program, as their proud families and guests looked on. 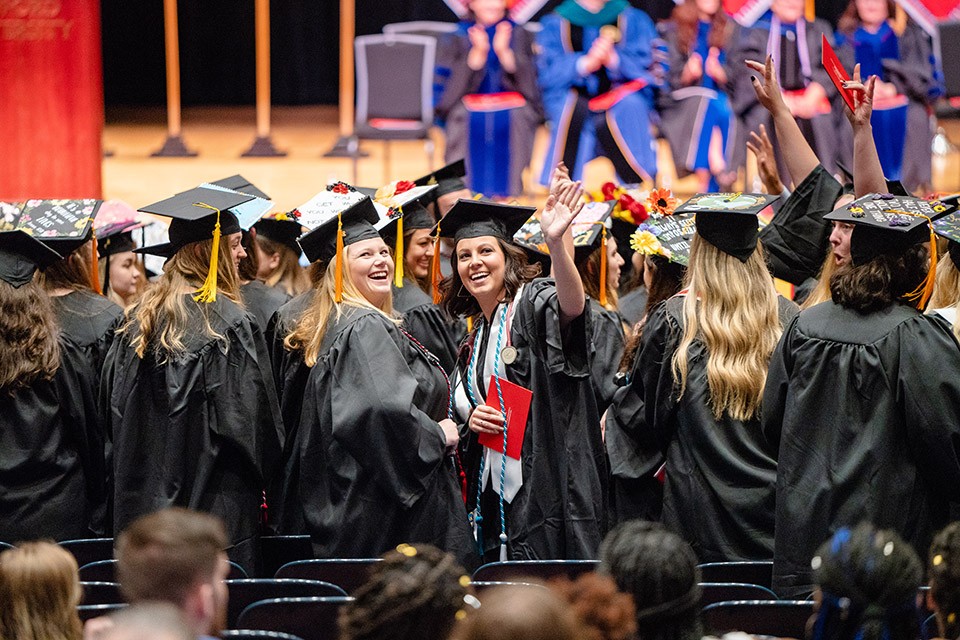 Students - now proud Radford alumni - wave to their families and friends during the Commencement ceremonies on May 10-11.

Interim Provost and Vice President for Academic Affairs Kenna Colley, Ed.D., introduced the platform party of Radford University President Brian O. Hemphill, Ph.D., Board of Visitors members, vice presidents and special guests, including Randal J. “R.J.” Kirk, J.D., and Sandra and Jack Davis. First Lady Marisela Rosas Hemphill, Ph.D., was also in attendance and sat alongside proud Highlanders, who joined together to celebrate the achievements of the Class of 2019.

Kirk, a Virginia native and Radford University alumnus, served as the commencement speaker.

An attorney by training, Kirk entered the biomedical field in 1983 co-founding Bastian, Virginia’s General Injectables and Vaccines. General Injectables ensured vaccines and therapeutic drugs were accessible at the point-of-care as pre-loaded injectables, helping to pioneer an intervention that is now a healthcare standard. He is one of biotech’s foremost individual investors, inventors and executives. He has brought a number of successful drugs to market, including those during his decade-plus leadership of New River Pharmaceuticals.

In his remarks, Kirk emphasized four virtues that each graduate to adhere to as they continue their “lifelong search for truth:” intelligence, diligence, loyalty and honesty. These virtues, Kirk explained to the graduates, “have been instilled in you since you were children.”

“So, my ask of you is that you continue to have the same curiosity, the same fun-seeking attitude, the same openness to learning, the same desire for friendship and camaraderie that you had then. That is what you preserve. The best part of your education is what your parents taught you. Please do not lose sight of those values,” Kirk continued. 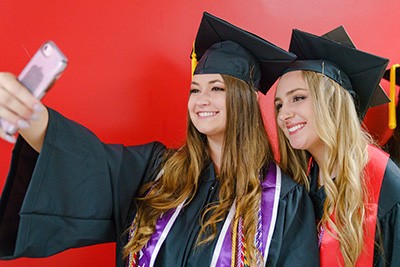 Two Radford alumni take a selfie prior to Commencement.

Following his remarks, Kirk was conferred an Honorary Doctor of Business degree by President Hemphill in recognition of Kirk’s distinguished career as a dynamic leader and entrepreneur in business and an investor in the advancement of healthcare.

As the ceremony continued, Sandra C. Davis was conferred an Honorary Doctor of Business degree in recognition of her invaluable lifetime achievements created through business investments, steadfast leadership and genuine compassion for others. It was noted that her expertise in property management and real estate development has shown, time and time again, what it means to help others. And, through the generosity of Sandy and Jack Davis, generations of Highlanders will have the opportunity to attend Radford University as Davis Scholars within the Davis College of Business and Economics, as well as in the College of Visual and Performing Arts.

Another special moment at Commencement was when Mark Lawrence reflected on his service with the Board, as well as his pride in the many incredible Radford University students he has encountered.

“I know that I speak for each of my Board colleagues when I say that we are blessed to be part of the vibrant, passionate and talented Radford family,” Lawrence said. “For me, like you, this is my final year here as rector.”

Lawrence said he was proud to see such an outpouring of Highlander spirit on display throughout Commencement Weekend.

“That Highlander spirit will serve you well in the next chapter of your life,” Lawrence said. “It is just one of the things that makes this place so special. This University is committed to your success, and we look forward to the many contributions that you will make to your families, your communities, the Commonwealth of Virginia and the world.”

Lawrence concluded his remarks by reminding graduates that they will forever be part of the Radford University family.

“As you move into this next step of your life’s journey, while you may not know it now, you will find that this place and your experience here has prepared you very well. You are going to do remarkable things. You are going to face challenges, but you are going to make the world a better place, so jump right in…Remember wherever you go, you are alumni and ambassadors of Radford University.”

Before the Artis College Commencement Ceremony, physics major Zachary Gwyn, of Blaxton, Virginia, reflected on the outpouring of support he received from Radford University faculty.

“All of the professors are very helpful and very involved,” Gwyn said.

Upon graduation, Gwyn will attend the University of Florida to pursue a master’s degree in aerospace engineering. He credited Physics Instructor Michael Freed for supporting his undergraduate research and helping him secure acceptance into graduate school.

“He believed in me,” Gwyn said. “I will feel like this is always going to be home for me. I’ll be coming back to share all my experiences with my professors. The professional relationships I’ve made – it’s been really nice having a close-knit group of support, especially since I’ll be going to a larger college.” 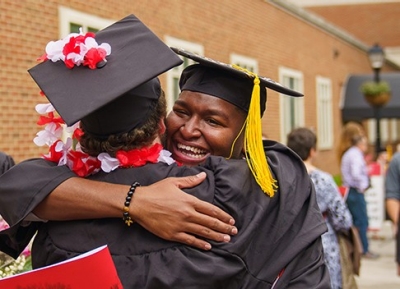 Two proud Highlanders share an embrace during the Commencement festivities.

At the CEHD Commencement Ceremony, friends Kelly Cashman, of Loudon County, Virginia, and Madison Costner, of Richmond, Virginia, could not contain their enthusiasm.

“It’s been a long four years and a lot of sleepless nights and hard work,” said Costner, also an allied health science major. “To be here, with all of my friends, is so wonderful. I am so excited to graduate.”

At the Waldron College Commencement Ceremony, 20 family members and friends showed up to watch nursing graduate Kaylyn Morton, of Wytheville, Virginia, receive her degree. These important bonds, and the ones with her fellow nursing school colleagues, were her motivation to succeed.

“What will I miss most? These people,” Morton said. “They helped me with so much. We studied, ate and worked together. When things got stressful, they calmed me down,” she said.

Morton’s next journey will be in Carilion Roanoke Memorial’s Emergency Department.

At the CHBS Commencement Ceremony, Abigail Bailey, also of Wytheville, was following in her father’s footsteps. He is a proud Radford alumnus, she explained.

“Once I stepped foot on campus at Highlander Day, I knew it was the place,” said Bailey, an English and journalism major. “I was completely sold.”

Bailey said her favorite Radford University experience has been serving as a Quest Assistant, for the University’s new student orientation. She has been involved with Quest every year since she was a freshman and plans to serve as the Quest graduate intern this summer. This fall, she will pursue her master’s degree at Radford University.

Several additional ceremonies were held on campus Friday, including the Army ROTC Commissioning Ceremony at which nine officers were commissioned. Pinning Ceremonies were held for Bachelor of Science in Nursing and Doctor of Physical Therapy candidates. The Multicultural Congratulatory Ceremony was held Friday evening, in addition to the College of Graduate Studies and Research Hooding and Commencement Ceremony.

For Master of Science in Strategic Communication alumna Kelsey Marchant, of Marion, Virginia, the journey to receiving her advanced degree started when she was a communication undergraduate student at Radford University.

“Radford has really helped me grow and know who I am as a person,” Marchant said. “Radford has opened up doors in so many ways for me. This place means a lot to me.”

The impact of the University was visible at all the events during the two-day series of celebrations. During the commencement events, there were warm embraces, emotional parents, joyful friends and proud faculty congratulating the graduates they were privileged to teach. There was an outpouring of happiness, hope and Highlander pride.