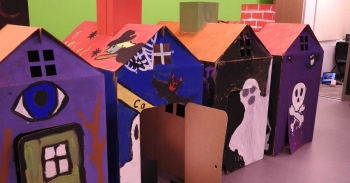 The "Hack Houses" used in the cybersecurity tournament were purchased online, decorated by elementary school students and rigged with Google Home and other technologies.

For the first time ever, the final tournament round of Radford University’s popular RU Secure Capture the Flag cybersecurity contest was livestreamed on Amazon’s Twitch.tv, the world’s leading livestreaming platform for gamers.

The gaming site brought thousands of online viewers to campus, virtually, on April 27, specifically inside the College of Humanities and Behavioral Sciences Building and its state-of-the-art television studio. Hosted by Tracy Peterson, a producer and event personality who regularly works with Twitch.tv, the program was the first in what is planned to be a series of educational and entertaining videos. The planned series will include information about cybersecurity, Radford University’s Department of Information Technology (DIT) classes and the University’s Cyber Defense Club activities.

During the final round of the competition, sponsored by the Artis College of Science and Technology, dozens of high school and community college students representing 15 teams, competed to solve problems, both virtual and in the physical world. While some competitors sat in computer labs to solve complex cybersecurity problems, others worked to virtually break into “Hack Houses” that were rigged with Google Home and other technologies. The four life-size playhouses were decorated by local elementary school students through a special partnership forged by Joe Chase and Prem Uppuluri, Capture the Flag co-directors and Radford University professors.

“Our goal is to ultimately improve cybersecurity literacy among K-12 students across the Commonwealth,” Chase said. “Some of the most fun we had was actually working with K-2 teachers, who came up with some really creative projects.”

The new partnership is just one example of how the contest’s impact has grown throughout the past several years.

More than 1,800 students from across the United States participated in this year’s contest, compared to just 36 students when the contest was established in 2014. 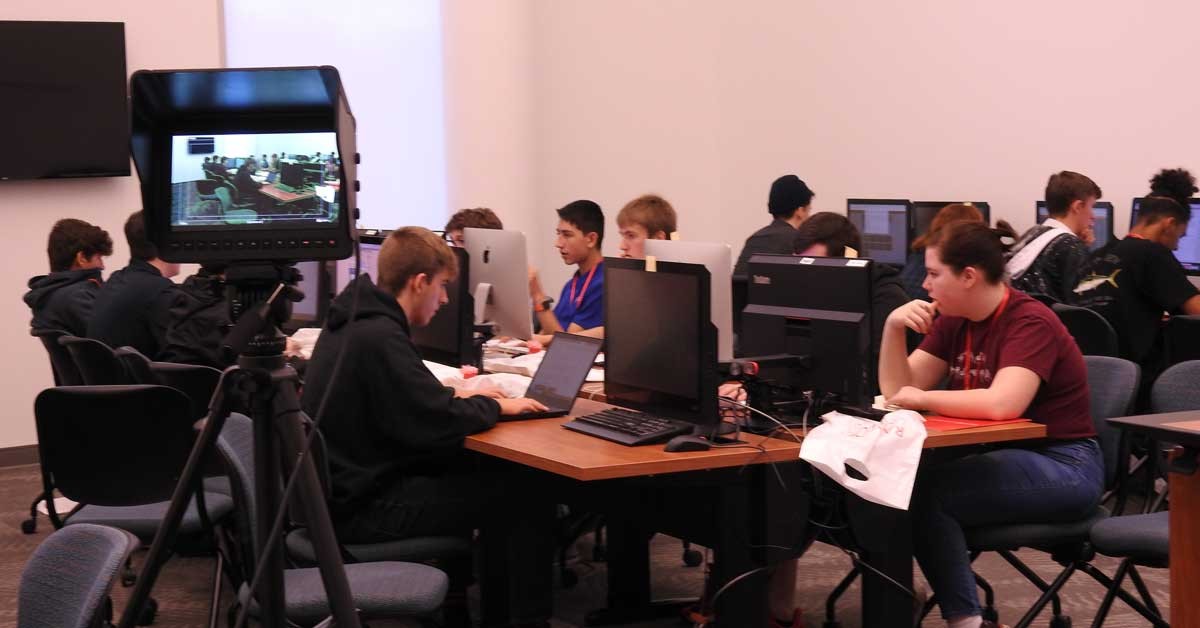 Students practice and learn cybersecurity skills during the final round of RU Secure Capture the Flag competition.

The preliminary round of the contest, held in the fall, was purely educational. Concepts taught and learned during this round are required in most school systems, with many schools are eager for enhanced educational opportunities within cybersecurity. The qualifying round of the tournament is when the competition kicked in. Schools picked their top teams to compete, and just 80 advanced this spring. Of the 80 teams that advanced, 15 competed in the final round at Radford University.

A team from Montgomery Blair High School in Silver Spring, Maryland, named “Less is More,” took home the trophy and the award of a $2,000 scholarship for each student attending Radford University in the future.

The contest, now a signature event within the Artis College of Science and Technology, aligns with Radford University’s goal of increasing its tech-talent pipeline. Through additional technology-focused programs, such as IMPACT’s cybersecurity certification and the new cybersecurity undergraduate degree, Radford University is working intentionally to produce graduates well prepared to design, implement, deploy and administer technological solutions to prevent and defend against cyber-attacks.