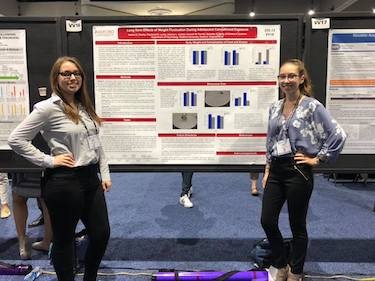 Radford University empowers students from diverse backgrounds by providing transformative educational experiences and one way this is accomplished is through unique research opportunities.

Deanna Cashel, a junior psychology major from Kentucky, has experienced the transformative nature of research first-hand.

Cashel came to Radford to study behavioral and counseling psychology. She loves learning about how people think and act. But, after taking a course with Pam Jackson, professor of psychology, Cashel wanted to jump into the research arena.

“The vivarium intrigued me, and I thought it was a good start to build my resume,” Cashel said. “I want to do counseling psychology, but getting this experience is really beneficial for giving me diverse educational opportunities. I had never really learned about the experimental stuff before working with Dr. Jackson. It’s been a whole new world to me full of great experiences and opportunities.”

The current research focused on manipulating food supplements to control weight fluctuation in adolescent rats following cannabinoid exposure. The study used male adolescent rats to investigate whether the lack of weight gain in cannabinoid-exposed animals may be responsible for some of the variability in behaviors observed in the adult. This was addressed by providing half of the cannabinoid animals with a large amount of supplemental Ensure and comparing each control animal to a drug animal in terms of the availability of food and supplements.

“I am looking at the anxiety measures from the small open field maze that we used for anxiety, which is basically just a box,” Cashel said. “We measured their rearing and distance traveled [in the maze].”

Most students don’t get to do anything like this until they are in graduate school.

That research resulted in Cashel – and other Radford students – attending two conferences. The first conference, Society for Neuroscience, occured in November 2018 in San Diego, California, and featured a more general study that Cashel contributed to with some graduate students.

Cashel is attending a late-February Eastern Psychological Association conference in New York City that features Cashel as the first author, where she is focusing on anxiety measures found in the more general study. Cashel’s research is also her Honors College capstone experience.

“The conferences open my mind to more of the psychology world,” Cashel said. “Coming up, I wanted to do counseling or child development. This led me off into a new world of psychology and has pulled everything together for me.”

Cashel has a love of all animals – she’s been a part of the Radford Redcoats, the club equestrian team – for a few years.

“These are not wild rats. They’re born in the lab, raised in the lab, constantly touched by people. They’re friendly – for the most part,” Cashel said.