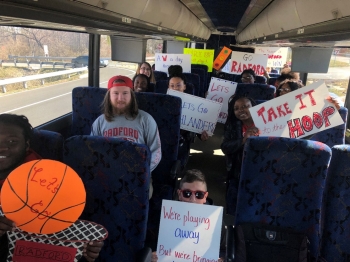 Radford University students on the bus headed to College Park, Maryland, to cheer on the Lady Highlanders.

Two buses full of Radford University students headed out before dawn on March 23 to College Park, Maryland, where the Lady Highlanders basketball team played against the University of Maryland Terrapins in the first round of the NCAA Women’s Basketball Tournament.

Close to 100 students joined alumni, faculty, staff and university administrators in the stands of the Xfinity Center to support the Highlanders. The team advanced to the national tournament after winning the 2019 Big South Tournament Championship for the first time since 1996.

Although the Highlanders did not defeat the Terrapins, they played with grit and integrity and were championed by an equally proud crowd.

“I know all of the players’ names,” continued junior Bettina Cambridge.

Cambridge started attending the women’s basketball games this season with her friend, who is in the pep band. Now, she is a super fan.

“They are a really good team, and I am proud that they’ve made it this far,” Cambridge said.

Cambridge sat with a small, but spirited, group of students behind the pep band during Saturday’s game. They waved encouraging posters, screamed and stood as the Lady Highlanders battled up and down the court.

“We might be small in numbers, but we are big in our voices,” Cambridge said, as she took a short break from cheering. “We let them know that we’re here. They’re not alone.” 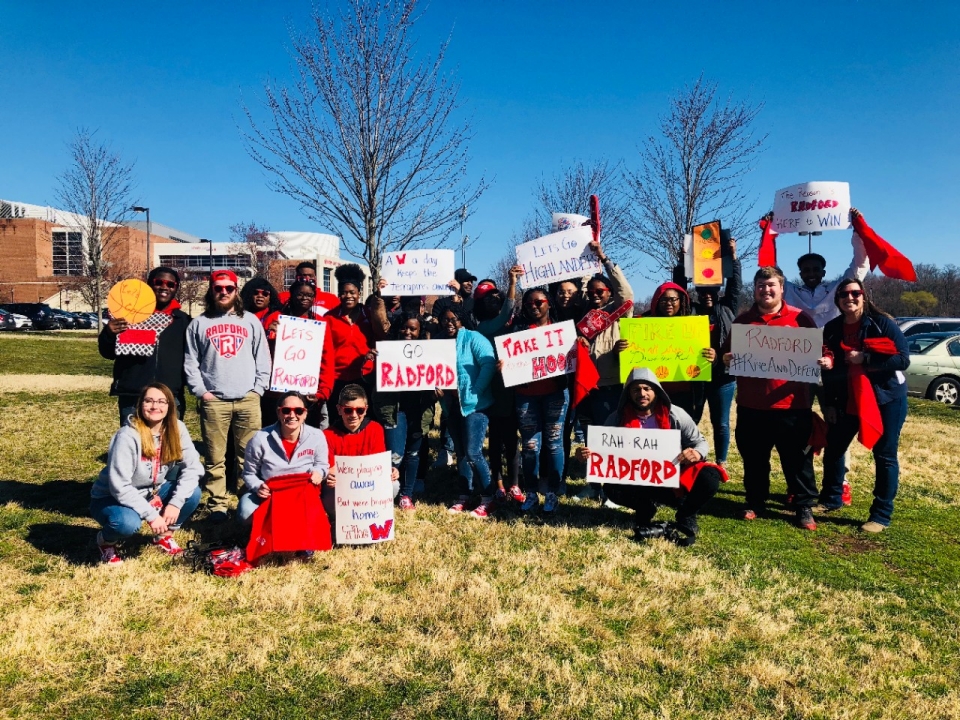 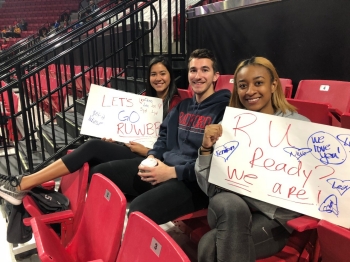 The trio signed up together to attend the game. It was a group effort, Marce said, adding that they checked in on each other that morning to make sure everyone made the 5:30 a.m. departure from campus.

“I’ve never done anything like this before,” Singletary said. “It’s been fun to get out and see a different college campus.”

Senior Hayden Boak traveled to Dayton and was excited to support the women’s team this year in College Park.

“It’s not often you get these opportunities at smaller schools,” Boak said. “It’s been a really fun experience.”

Associate Vice President for Student Life Tricia Smith traveled with the students to and from College Park, about a 10-hour round trip bus ride.

"I am so proud of both our women’s basketball team and our amazing students who cheered them on," Smith said. "Their energy was contagious, their Highlander pride was palpable and they represented so much of what is remarkable about the Radford University experience. It truly is a family – we support each other all the way."

With just seconds left in the game and a Radford University victory slipping further from sight, Highlander fans stood tall.

Radford University volleyball players Valerie Gonzalez and Amaya Rousseau were especially supportive of their fellow student-athletes as they waved banners and cheered the entire game.

“They have worked so hard and overcome so much to get here,” Rousseau said.

“This is their moment in the spotlight,” Gonzalez added. “They definitely deserve this.”

The women’s volleyball team won the Big South Championship in 2017.

“And the women’s basketball team wouldn’t let us forget it. They were celebrating with us the entire time,” Rousseau said.

“Today, win or lose, they are champions to us.”