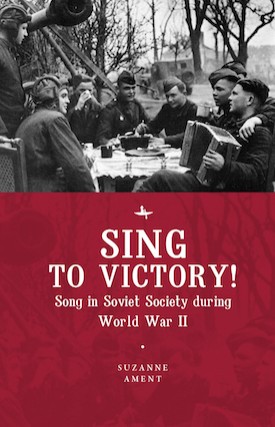 While the book may have been published in 2019, the idea for the it stems back to when Ament was an undergraduate student at Indiana University – and when she visited the Soviet Union as a freshman in 1978.

Ament visited the Soviet Union during the height of the Cold War and her fellow classmates were followed by undercover Soviet agents and were required to stay in tourist hotels.

“I look back, and the hotel band started playing Hotel California when we arrived,” she said. “There was no coincidence there. At the time, I didn’t get that.”

As part of that experience, Ament had to keep a diary in Russian and was required to write a paper upon her return to the United States.

“What I noticed while I was there was music,” she said. “I looked at music in my paper as an undergrad and sort of how people used music to express themselves. The state had these very specific musical elements, like the chimes on Red Square.”

That was just the start of Ament’s journey, however. The path of discovery truly began when she returned to the Soviet Union as a junior.

“That was when I first heard the World War II songs,” Ament said. “Young people were singing them – they aren’t like war songs. They’re romantic and poetic. They might be called trite or trivial melodies in terms of being simplistic, but they grab your heart. They grabbed mine.”

Ament chose to research the World War II melodies in part because she could conduct in-person interviews. As a blind person, interviewing was “more interesting than archival research,” she said.

Before diving into the research for her dissertation, Ament thought the Soviet-era World War II songs were part of a grassroots campaign created by the common Soviet citizen.

“In reality, it was the Soviet bureaucratic creative system that, with input from soldiers and regular folks, coming back and saying that the soldiers needed something other than marches or rah-rah victory songs,” Ament explained of her completed dissertation.

Ament returned to the Soviet Union in 1990-91 with Barbara Allen, her assistant and now associate professor at LaSalle University.

Even though she had the goal to turn her dissertation into a book, the idea was shelved until the late 2000s. In 2012, Ament received a semester sabbatical from Radford University, and she spent about six hours each day reading to turn the dissertation into a book. Having received tenure at Radford and assistance from the College of Humanities and Behavioral Sciences (CHBS) Office of the Dean, Ament was able to hire native Russians to read academic Russian literature to her.

With continued assistance from the CHBS Office of the Dean and Ament’s assistant, Chris Bradbury, the book was completed.

“The book describes the legacy of music that is shared by not just the Stalinist state, but also the populace and even people that rejected the Soviet system altogether,” Ament said. “It was accepted as something valuable. That just wasn’t heard of in the Soviet Union and Russia.”

The book’s publisher, Academic Studies Press, has expressed interest in using the book in a series titled “View from the West.” "Sing to Victory! – Song in Soviet Society during World War II” would be published in Russian and allow Russian intellectuals to see how other societies view their culture.

In addition to the research and interviews on the subject, Ament also sings Soviet-era World War II songs in Russian.