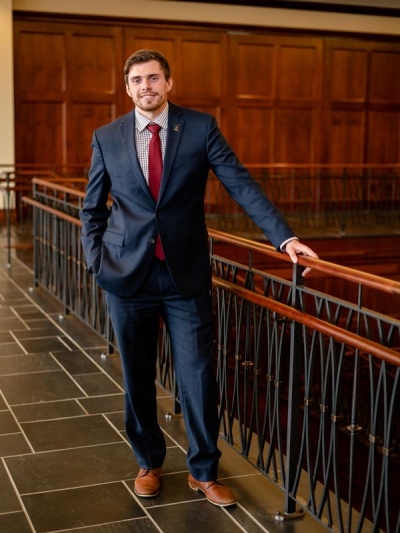 As he pulled up to his house, riding in his friend’s pickup truck, the snow began to fall. He walked in his house, located in Orange County, Virginia, to see his mother standing in the kitchen, holding mail from Radford University. It was his official acceptance packet.

John’s mother was the first in the family to find out, and she immediately shared the good news with John’s father.

He was up on a rooftop, trying to finish his work as the weather was worsening. He answered his phone, and the words “John got into college!” landed on his ears.

He froze, forgetting that he was supposed to finish working on the roof. The tears fell as he realized his dream of seeing his son receive a college education was coming to fruition. John is the first member of his family to attend college, which made the moment even more special. “To me, going to college is a privilege,” John said.

That afternoon is one John’s family will never forget. That was the day Radford University said “yes.”

John made the transition to college life well, and his first year at Radford University was smooth sailing.

Even so, he had to adjust to being responsible for his own schedule and no longer being able to eat his mom’s home cooked meals.

Sophomore year, however, was an entirely different experience.

“Sophomore year was a real struggle, because my study habits hadn’t caught up to the difficulty of the classes,” John said. He was not performing well academically and had to face that reality with his academic advisor, Melanie Butler.

“We had one of those really hard conversations,” Melanie said. “It was a make or break kind of thing.”

“She was the first person on campus to see me shed a tear. That was a long walk out of her office,” John recalled. “But, I kept going back to her. I went to her office almost every other week to check on my grades and my classes.”

Even under the burden of academic adversity, John didn’t relent.

“I’ve always been one of those people that if I fail at something, I’m willing to try harder, I’m willing to make it work,” John explained. In the days and weeks to come, he revised his approach to studying and implemented systems to hold himself accountable for his academic success.

Melanie said that “something clicked and he completely changed.”

RESILIENT
Sophomore year was a turning point for John, a moment in which he realized that his Radford chapter was up to him to write and create.

“One day, it dawned on me that people are successful, because they went and took chances and made it their own. I thought to myself, I’m going to make a difference,” John said.

To truly own his Radford experience, John got involved both on and off campus.

John is now the Student Government Association secretary of legislative affairs. He is also a member of VA 21, an organization with a goal of “empowering young Virginian's with the skills and opportunities to promote policy related to college affordability, student rights, election access, campus safety and economic opportunity.”

As part of VA 21, John travels to Richmond once each month and attends a leadership summit over the summer. “It taught me how to advocate on behalf of myself and other organizations,” John explained. 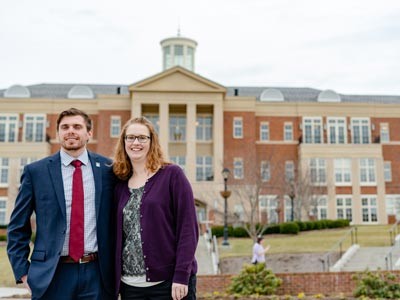 John was also involved in politics and began working in support of multiple campaigns with an impact on the local region. John had a direct role in working to ensure the maximum turnout of voters made it to the polls during recent elections.

John also takes advantage of many on-campus opportunities to engage, learn and grow. He attended events as part of the Women’s Entrepreneurship Week and actively participated in the recent Retention Summit.

“We were at the Retention Summit before the semester started, and he was sitting on the end, just a few rows up from me, and I could see him taking notes,”
Melanie recalled. “I got tears in my eyes knowing how far he’s come.”

John also traveled to Richmond for Advocacy Day to represent Radford University alongside his peers, faculty and staff.

“The John of today is not the John from two or three years ago. I’ve watched him grow up, and it has been really impressive,” Melanie said. “He found his ‘thing,’ and he has figured out how to run with it. It is really neat to see.”

John is an active member of the Radford University community.

John’s Radford experience had its ups and downs. He overcame the challenges that being a first-generation college student presents. While his experience wasn’t easy, it’s been real.

“To know the journey he’s had, he will be a student I will never forget,” Melanie said.

John learned that being an engaged member of the Radford family and surrounding community is critical to his success.

He discovered his passion for politics, and he is now equipped with intrinsic tools needed to learn, grow and ultimately make a difference in society. John emphasized that his Radford experience helped him “be prepared for the unexpected.”

As he looks toward graduating with a bachelor’s degree in business management, he considers his future. He is hoping to find something that allows his experience in politics to intersect with his interest in business. “I’m passionate about politics and helping Virginia businesses,” John emphasized. “I’m looking for my next challenge.”

Even with unknowns on the other side of graduation, John is certain of one thing. “I’m going to be pretty proud when I get to look at my mom on graduation day and say, ‘I did it.’”