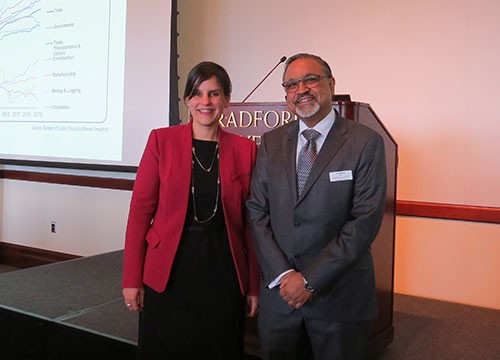 Economist Sonya Ravindranath Waddell of the Federal Reserve Bank in Richmond delivered the keynote address on Feb. 28 at the Radford University Davis College of Business and Economics Global Capitalism Lecture Series, which is sponsored by BB&T.

Waddell engaged students, faculty and community leaders with remarks focused on the economic outlook for Virginia and the United States. Using a series of charts and graphs, she explored economic growth in Virginia’s rural areas compared with urban areas of the Commonwealth and examined which industries have grown most since December 2017.

“Davis College was honored to have Ms. Waddell as the speaker for the Spring 2019 BB&T Global Capitalism Lecture and is thankful to her, as well as the Federal Reserve Bank of Richmond,” said Davis College Dean Joy Bhadury. “The lecture was very informative with regards to the overall macroeconomic climate in the Commonwealth as well as Southwest Virginia and the challenges that lie ahead for disparities in the economic climate across the Commonwealth.”

In her role as vice president and economist at the Federal Reserve Bank, Waddell is responsible for the regional and community development research areas within the research department, including setting strategic direction for various data products, surveys and other regional and local analysis.

Waddell’s work involves analyzing economic trends, writing for a variety of publications and presenting on regional and national economic conditions.

Prior to joining the Richmond Federal Reserve Bank in 2008, Waddell worked as an economist in the Virginia Department of Planning and Budget, also in Richmond, Virginia, and at ICF International in Washington, D.C.

Waddell is among the many distinguished speakers invited to share ideas at the semi-annual symposium that is designed to stimulate thought and discussion about capitalism, the tenets of free enterprise and the best practices of successful businesses and organizations.

Part of its importance is the involvement of students. Davis College faculty members are encouraged to invite one student “whom they feel will most benefit from the lecture,” Bhadury said.

“It was an honor that Dr. Davidson selected me to attend the lecture," Dupre said. “I accepted the invitation right away because I knew this would be a great opportunity and wonderful learning experience.”