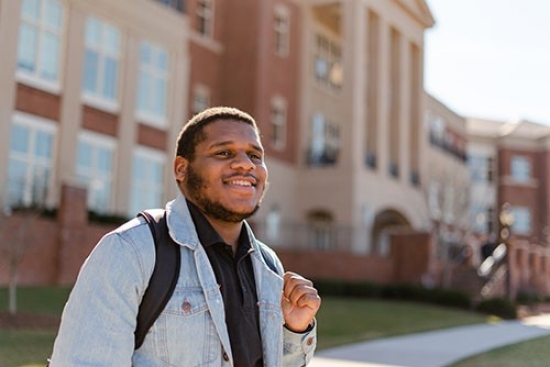 Breon Case’s smile lights up the room when he talks about his grandmother.

“She cries – it’s tears of joy – but she cries and she cries,” he says about the woman he calls “Nana,” the woman who has had such an incredible influence in his life.

Breon came to Radford University in the fall of 2017 as a freshmen, and it didn’t take long for him to make a profound impact. He can share a long list of his campus involvements, and there’s an even longer – perhaps innumerable – list of current and potential students whom he has guided and continues to guide through the process of becoming a member of the Radford University family.

The joy the sophomore management major brings to campus stems from his love of family and the ideas of kindness and hard work they have gifted to him.

From an early age, Breon and his twin brother, Savion, spent quality time with their Nana. Their parents were young. Their mother was 16 and their father was 18 when the twins were born. “They had to work hard to support twin babies,” Breon says.

When their parents worked, Breon and Savion stayed with their Nana. “She still thinks of us as her babies,” he says.

Nana was busy, too. A go-getter, she was the CEO of Southeastern Virginia Arts Association, a nonprofit organization that offered workshops in the Hampton Roads area “for kids aged zero to 100,” Breon explains. She also was heavily involved in a popular music festival, called Afr’Am, that brought to Norfolk popular acts such as Keith Sweat, Dottie Peoples and LeToya Luckett, an original member of Destiny’s Child.

“We always had VIP and backstage passes, and it was a great feeling,” Breon says. “People would say we were spoiled. I would say, no, we weren’t. We worked hard. There was a lot of work that went into it.”

Breon was always part of the effort and excitement. His grandmother always encouraged him and Savion to go the extra mile, to get the most out of life and to help others do the same.

“She tries to get us to do everything,” he says, laughing. “Because, if you help people, there’s always a blessing in being a blessing.”

When Breon first came to Radford, he wanted to be involved in campus activities, but never thought about starting something new. He was accepted into the Honors College, which he thought would be enough for his freshman year because it would require so much of his time.

But then he noticed something.

“I looked at the demographics of the Honors College and I began wondering why there were not many African Americans or minorities, especially African American males. When I was a freshman, there were only four,” Breon recalls. “So I thought, why not create something that could stay true to the academics of the Honors College and still promote social and career aspects, too?”

That thought became the genesis of Black Leaders Attaining Careers, or BLAC for short.

Breon and Savion created the new organization – Savion has since transferred to another school – to help minority students achieve academic success, develop leadership skills and prepare for career prosperity. The group started by holding a stress-buster event during exams week. It now hosts leadership workshops and conferences, such as the STEAD student leadership event coming up on March 30.

To be a member of BLAC, students must maintain a 2.5 GPA. To serve on its executive board, a 3.0 and good standing with the university is the requirement. “You are being held to a high standard,” Breon says.

The organization is still in its infancy, but it is growing fast. BLAC started in the fall of 2017 with 13 members. That number has jumped to 60.

“Our number one goal here at Radford University is to get a degree. We can have fun, too, and that’s ok,” Breon explains. “But we’re here for business. Business comes first, and we’re here to help students prepare to get their degrees and be successful. That’s what BLAC is about.”

When Breon was accepted for admission to Radford University, his high school guidance counselor suggested he apply for the Honors College. He did and was accepted.

“Hmmmm,” he says, laughing while recalling his reaction to the news. “I guess I have to act on it now.”

He knew Honors College would be demanding, and stressful at times.

However, after nearly two years into the experience, he is happy to be among a group of close-knit students and faculty that he describes as “being as passionate about academics and the university as I am.”

The professors in the Honors College, Breon explains, “give you the full hands-on experience and they create the home environment that we need, especially coming here as a freshman. Even though my home is 303 miles away, I always feel like the Honors College at Radford University is my home, too.”

Honors College academic rigors can be stressful, “but Dr. C., Honors College Director Niels Christensen, and the other professors,” Breon says, “are always there to help and create the environment that we need.”

Breon knows how intimidating it can be for students making the transition from the familiarity of their high schools to the uncertainty of university life. He is just two years removed from the process.

It is one reason he volunteers as a student representative with the Office of Admissions, regularly talking with and providing comforting and reassuring words to students and their families throughout the process. 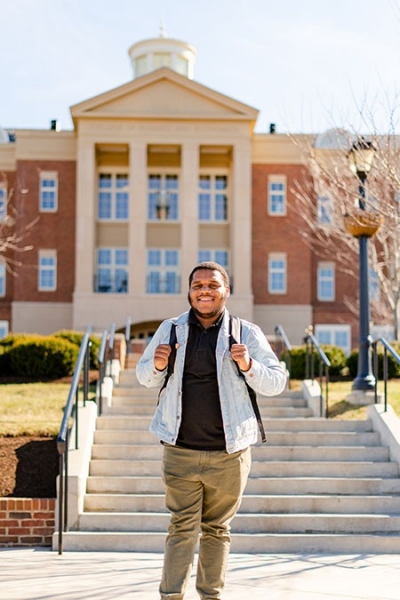 “It’s good for them to talk to someone who has been there and is close to their age. I think one reason Admissions brought me on is I know the process… and because I’m a relatable guy,” he says with a broad grin.

It is true. He is relatable. And fun. And charismatic. And genuine. In fact, there are several similar adjectives in your thesaurus to describe Breon.

There is one more word: leader.

This charming young man, who was a safety patrol officer in third grade, fifth grade president, student conductor in his high school chorus and senior class president, has brought his skills and talents to Radford University, where he is doing much of the same in terms of leadership while learning and growing more in the process.

In addition to creating BLAC, Breon is one of the student coordinators for the Office of Admissions tour guide program, he serves on the leadership development team for the Division of Student Affairs, he is a resident advisor in Moffett Hall and a student liaison for the entrepreneur living-learning community, and he is in the Black Alumni Networking Group.

“Breon is involved in a ton of leadership positions on campus,” Christensen said. “He has a passion for Radford University like few others.”

Breon’s eyes sparkle. “I really do,” he says as his trademark effervescent smile appears again. “My brother and I beat the statistics for where we’re from,” he says. “Our family has always wanted us to go to school, get a degree and make them proud. We are making them proud.”

He is involved, because he wants the university he describes as “through the roof” to follow its vision to become the premier innovative, student-centered university in Virginia and beyond.

“I tell students all the time that when they come to campus, one of the most important things they can do is become involved,” he explains. “The more you’re involved, the more it feels like you’re a part of the university, and you take more pride in your university. And, you have that sense of belonging, that sense of family.”

Breon knows about family, from the influence and inspiration he has gained from his grandmother, mother and father. He knows the benefits of hard work from the lessons he learned from his Nana and going to college classes with his mother as she worked tirelessly to earn her a bachelor’s degree at Norfolk State University – 13 years after finishing high school.

His Nana will never let him forget how proud she is.

“She wants to post stuff about me on Facebook all the time,” he says, looking slightly embarrassed. “But, it’s great because I want to make my whole family – and my Radford family – proud of me and proud of what I have accomplished for them.”