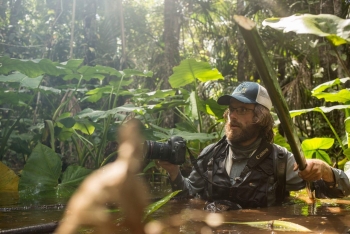 Frost will speak on March 25 at 4 p.m. in the Center for the Sciences, room M73. His program is titled, “Thank You, Failure: Embracing the Unexpected.” The event is free and open to the public and the entire campus community.

“Trevor Frost is a photographer and filmmaker whose work focuses on the human relationship with wildlife and wild places. Trevor has always had an adventurous spirit—he has crisscrossed Alaska and northern British Columbia in bush planes, followed the Serengeti migration, researched indigenous navigation in Polynesian culture in Micronesia, swum with humpback whales in Tonga, and embarked on numerous projects around the globe. He has received grants from National Geographic for work ranging from mapping and photographing caves in Central Africa to documenting saltwater crocodiles in Northern Australia using specially designed remote cameras. Frost is particularly interested in telling stories that illuminate the intelligence of animals, and he shot his first feature story as a photographer for National Geographic magazine on gelada monkeys in the highlands of Ethiopia.”

“Trevor had been working on a project photographing anacondas with our guides prior to our arrival,” Maxwell explained. “He stayed at the field station while we were there, and he got to know us and the students.”

In additional to Frost’s presentation, the RARE Festival will showcase the research and experiences of students and faculty who participated in the summer 2018 trip.

A detailed schedule of the 2019 RARE Festival is forthcoming.