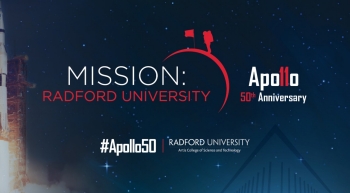 Fifty years ago, people across the world were glued to their television sets to witness a historical milestone: the Apollo 11 mission that landed the first two people on the moon.

Commander Neil Armstrong and lunar module pilot Buzz Aldrin, both American, landed the Apollo Lunar Module Eagle on July 20, 1969. On July 21, Armstrong stepped onto the lunar surface and famously stated, “That's one small step for a man, one giant leap for mankind.”

This summer, Radford University is inviting the public to step away from their televisions and into the Center for the Sciences on July 20, 2019, for a daylong celebration of the 50th anniversary of the “lunar landing.”

The celebration will feature screenings of "Moon 2019,” a full dome planetarium show produced by 3D Edu-Sphere especially for the day. There will also be planetary-themed painting workshops, astronomy activities, tours of the Museum of the Earth Sciences, interactive displays, lectures and more events for all ages.

The event, scheduled from 9 a.m. to 5 p.m., is a campus and community-wide collaboration to mark a momentous day in history, one Radford University physics professor and planetarium director Rhett Herman remembers fondly.

“I remember myself as a young kid watching this in a neighbor’s house since their television was better than ours. Even that young, it hit me that this was going to become the new normal,” Herman said. “This landing is the type of human achievement that our descendants will look back upon and say, ‘You know, they did something amazing.’ This was so monumental that it’s even in our lexicon now. Just think of all the times people say, ‘It’s their moon shot,’ when referring to what could be another monumental effort.”

Admission to the Apollo 11 celebration is free and open to the public. Food and beverages will be available for purchase.