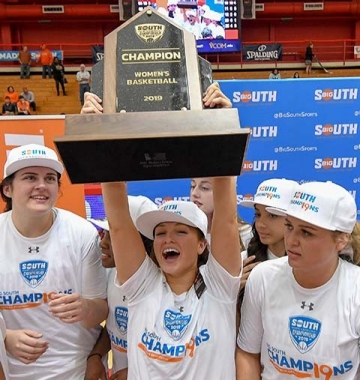 “There is so much that went into that moment. It was an experience unlike any other,” McGuire said. “I thought about all the people who helped. I was so happy for so many people.”

Radford defeated Campbell 57-45 on March 17, 2019 to win the 2018-19 Big South Championship, hoist the trophy and cut down the nets. The victory marked a milestone achievement – for Radford University women’s basketball, for McGuire himself and for his players, some of whom had joined him when such a celebration seemed an unlikely prospect.

With a vision in his mind, McGuire joined the Radford family on April 24, 2013. The Radford women’s basketball program, he said, would be one “where all the student-athletes and coaches feel part of something really good and close knit . . . one that attracts great people year after year. . . one that engages the campus, the community and Radford alumni to watch us play.”

The first-time head coach took over a program that had fallen on hard times. Since his arrival, McGuire’s teams have posted an overall record of 116-75 at Radford and 78-36 in Big South play. The Highlanders won two Big South regular season championships and one Big South Tournament title, while making three WNIT appearances and one NCAA Tournament appearance.

To fulfill the vision and build the latest edition of great Highlander women’s basketball, McGuire was guided by the values he developed throughout his 28-year journey from disappointed baseball player to Division I head coach: integrity, respect, appreciation, passion and unity.

“We had to make tough decisions, and every decision is based on core values,” said McGuire, who appreciates the harmony with Radford University’s values: responsive, resilient and real. 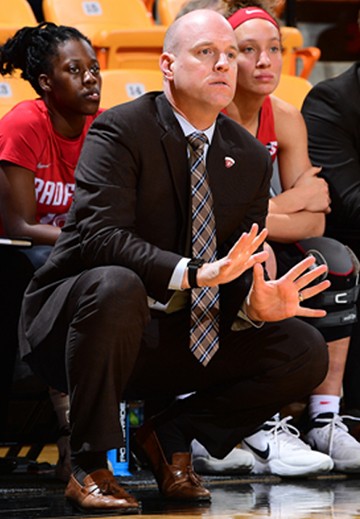 Head Coach Mike McGuire on the sidelines as he leads the Highlanders.

“Being a coach, I have to be a leader and that involves being transparent, honest and genuine with our student athletes, our coaching and support staffs and my colleagues in the University administration. To me, being real is acting with integrity,” McGuire said.

Real communication helps the players respond to challenges on and off the court, according to McGuire. The Highlanders’ responsiveness was tested after the non-conference season ended. Things were not going right.

McGuire said that senior forward Destinee Walker, a co-captain, came to him in the office to express her concern that “things feel off.” She told him that it felt “off” in the locker room, on the court and between him and her.

McGuire said, “That was a defining moment. We held a meeting on New Year’s Eve and talked about what they needed from me, from each other and themselves individually. We talked about the energy and the enthusiasm we need from each other every day. They asked for more encouragement and less criticism from me. There was a lot of good conversation that helped us refocus on what was important,” McGuire said.

“Tough times and adverse situations?” said McGuire. “These kids were willing to go through them. They learned, they endured and they responded.”

The team’s resilience was tested individually and as a unit. In 2015-16 knee injuries literally swept the team off its feet as four players were hobbled and sidelined for extended periods of time. The 2016-17 season served up another lesson that fortified team resilience. Lofty expectations were shattered with finality and disappointment as their buzzer-beating shot fell short in the Big South championship game.

From day one, circumstances dictated that resilience become a keystone for McGuire and the Radford women’s basketball program. In 2013-14, his first season as head coach, the Highlanders had nine players, five of whom had never played Division 1 basketball and only one stood over six feet tall.

“To me, they were a special group. Five of them played for us for at least two years. Their perseverance and resiliency established a focus on toughness that we have built into our game and identity now,” McGuire said. 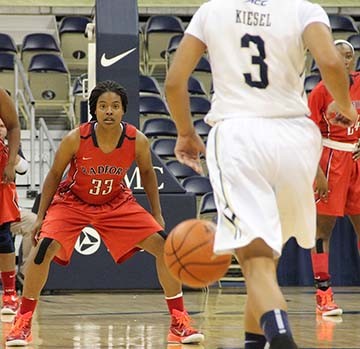 Kiera McIvor and her teammates were instrumental in helping McGuire establish a tradition of toughness that buoyed the recent teams as they restored the luster to Radford's heritage of success in women's basketball.

Kiera McIvor was a junior on that team who seized the opportunity.

“Kiera was one of those who helped us define who we are now,” said McGuire. “Radford’s 3R’s? She had them. She would compete, practice, work hard, lift weights and sprint.”

McIvor said she grew up fast that year as she played a forward/center position at a not-so-towering five feet and nine inches for a team who cherished each of its seven wins.

McIvor is now a senior labor analyst with the Compass Group in Charlotte, North Carolina. She said, “It helps to understand where you are and where you want to be. From there, by making a conscious effort despite the obstacles, you build, grow and become who you are.”

Both McGuire and McIvor were attracted by the heritage of Highlander success.    “The tradition and success is here. Barrett, Curtis and Luby are my distinguished coaching predecessors. They had really good teams with good players,” McGuire said. “When I met those who have been part of the successes of the past 30 years, I felt how much Radford and women’s basketball meant to them. I knew we just had to get it going again.”

As the 2018-19 championship celebration took place in the Dedmon Center, McIvor said she felt the team’s joy.

“I cried when they won that championship. My classmates and I didn’t play that game, but we feel part of the progress that led there,” said McIvor. “I came to Radford to be part of the winning culture. We went through tough times, but we relied on each other. It is nice to think we were able to contribute toward the new culture of success.”

The Highlanders have won 74 games in the past three years and played in the post-season for five straight years.  McGuire is proud of the Highlanders’ 40-2 record on their Dedmon Center home court.

“There is a lot of pride in how we play. We have a team that expects to out-work and out-prepare our opponents. We find ways to win and we flat-out win here,” McGuire said. “It is not always pretty, but we protect our home.”

“It was quite a run,” said McGuire of the team’s triumphant finish to the 2018-19 season with a shake of the head and a soft chuckle. “It was really cool to see that the culture we have worked to build about doing things together and getting it right together really propelled us.”

The 18-game winning streak included the Big South Tournament Championship, a bid to the NCAA Tournament, the first since 1996, and a second regular season conference crown in three years.

The team’s success swept players to honors as well. Junior forward Lydia Rivers was named the 2019 Big South Conference Tournament’s Most Valuable Player. Walker and Rivers earned first-team all-conference team honors. Junior center Sydney Nunley and junior guard Khiana Johnson were named to the second-team, while junior guard Jen Falconer was named to the conference all-academic team. McGuire was selected as conference coach of the year for the second straight season and the third time in his six-year tenure. 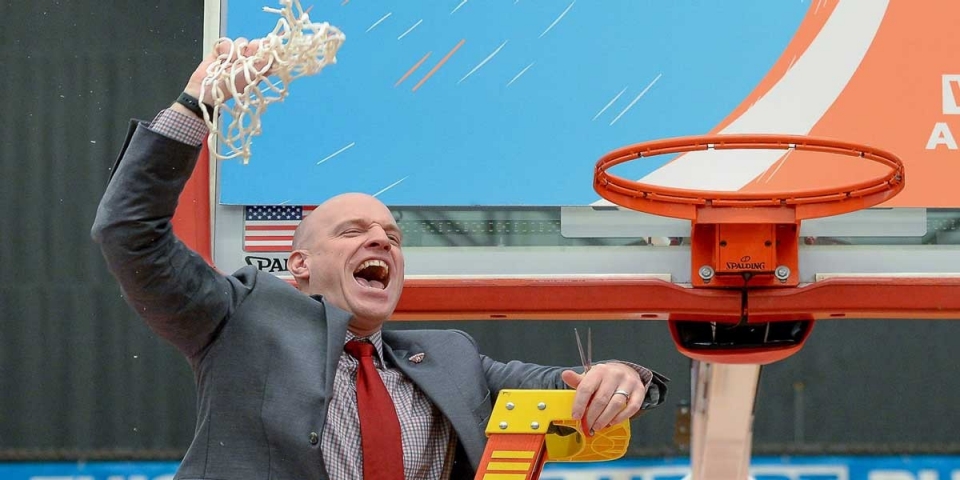 Head Coach Mike McGuire joined the celebration as the team cut down the nets after its 2018-2019 Big South Conference Tournament Championship in the Dedmon Center on March 17, 2019.

The run ended, as all such magical streaks do, with a 73-51 loss to Maryland in the first round of the NCAA Tournament.

As the glow of success lingers, McGuire does not lose sight of the adversity that toughened the team. They came together and succeeded, despite ups and downs.

From trying beginnings, McGuire, his staff and players are growing stronger as part of a University that is dedicated to student success.

“I believe in the mission of Radford University and the experience it provides students. The professors are real. They are engaged,” McGuire said. “You can sense the deep commitment of the people here at Radford to the growth of young people.