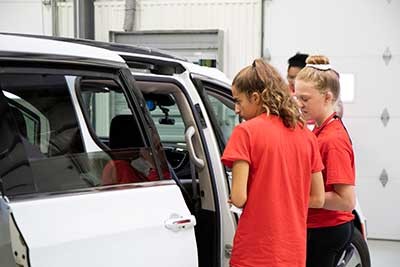 Throughout the tour, the group learned about Torc’s groundbreaking journey, its diverse team of engineers, software developers and other talented employees, and were inspired by the company’s innovative self-driving technology that has earned recognition and infiltrated industries across the world.

“We hope the young women who visited have a greater understanding of how technology can change lives, and we’d be delighted if any of them were to join our team after completing their education,” Reiter said. “Overall, we strive to educate the future generation of innovators on the impact they can have on the world. We would be happy if we inspired them with new options and ideas that will enrich their lives.”

“The skills and contributions of our Radford alumni employees make Torc a stronger company,” Reiter said. “We are proud of them.”

In the lobby of the Torc building – lined with large photographs of autonomous cars, trucks, defense vehicles and mining vehicles – Elder began the tour by outlining the company’s storied history that began in 2005 with a group of Virginia Tech engineering graduates who had competed in several self-driving vehicle competitions, including Torc Chief Executive Officer and Co-founder Michael Fleming.

Torc engineers partnered with a Virginia Tech student team to compete in the U.S. Department of Defense’s Defense Advanced Research Projects Agency (DARPA) Grand Challenge in the Mojave Desert, and earned high rankings among hundreds of competitors. The Torc team stayed together to commercialize the technology, Elder explained. Today, Torc’s research and development, engineering and consulting services are helping leaders in a wide range of industries put advanced robotics and on- and off-road self-driving automobile technologies to work and remains committed to its mission of commercializing self-driving technology to make the world a safer place.

Elder then led students throughout the building, including a garage where they explored an autonomous van. Fascinated by the vehicle’s unique features of prominent sensors, computer monitors, radar and LIDAR (Light Detection and Ranging), the students were full of questions and curiosity. 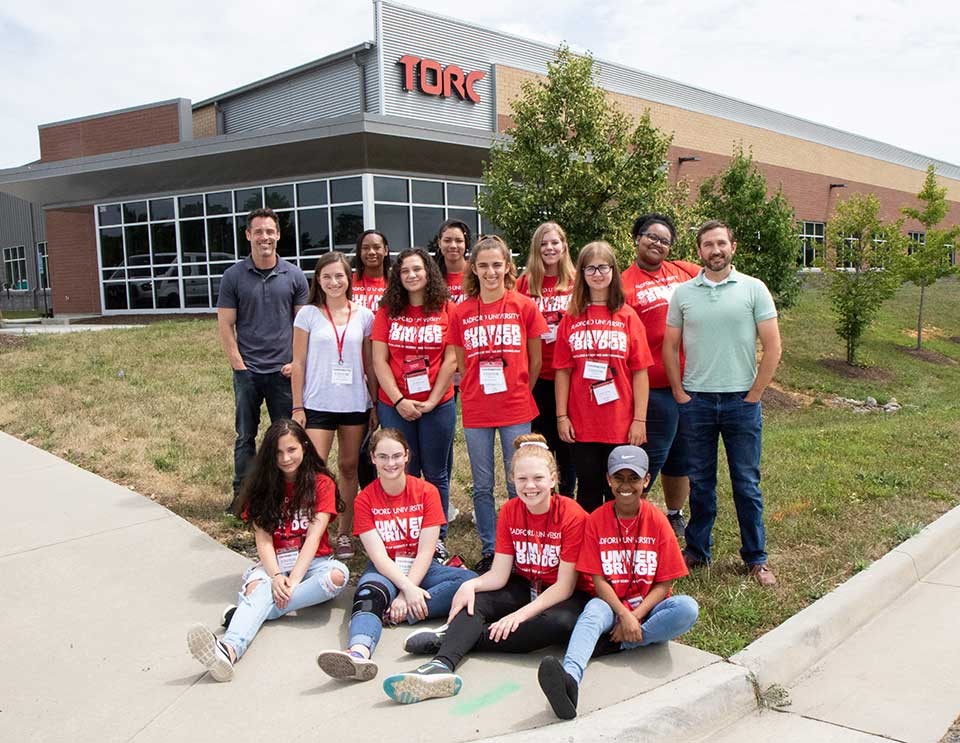 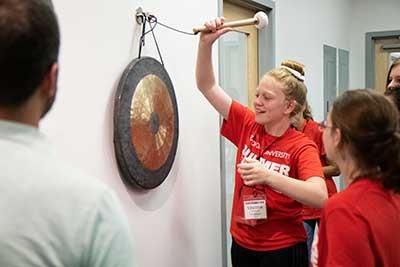 Camper Ellen Jones rings the gong in Torc's break room to celebrate a week of learning at Summer Bridge.

“I thought it was really awesome to learn about all the machines and software that make the cars maneuver,” said rising senior Meghan Brown of Stafford, Virginia. “And, it was interesting to learn that if the cars start to run into problems, a human driver can immediately take control.”

At the end of the tour, the group wound their way toward the exit, first passing through a comfortable break room of coffee machines, a ping pong table and a colorful prop that camper Ellen Jones, a rising sophomore from Yorktown, Virginia, could not resist.

Hanging on the wall of the Torc break room was a bright and shiny gong that is rung by Torc employees when they reach a goal or achievement.

With an enthusiastic ring of the gong, Jones and the rest of the group celebrated a week of learning at Summer Bridge.

“Our Summer Bridge students loved the visit to Torc,” said Summer Bridge Program Director David Horton. “On the way back to campus, they remarked about how much they enjoyed seeing the vehicles. I think that real-world experiences like this trip help them see the practical context for what they are experiencing in class.”

Exposing students to transformational educational experiences is just one element of Radford University’s dynamic Summer Bridge Program, which has been established for more than a decade.

The program is a weeklong residential camp that inspires female high school students in STEM education. The young scholars are divided into teams based on their educational interests, including geology, forensic science, environmental science, biology, chemistry, physics and mathematics. Throughout the week, they participate in interactive classes, hands-on activities and impactful field trips to companies and industries in the New River and Roanoke valleys with faculty, staff and students from the University’s Artis College of Science and Technology.

Summer Bridge students leave camp empowered and inspired to pursue careers in STEM fields, and oftentimes, they choose to continue that journey at Radford University, which is intentionally and successfully enhancing its pipeline of tech-talented graduates through its innovative curricula and programs.

The 2019 Summer Bridge Program will conclude July 19 on Radford University’s campus with a series of programs and presentations in the Center for the Sciences.

Torc and Daimler Trucks, a division of the Daimler Group — the inventor of the truck and world’s largest manufacturer of heavy and medium trucks — recently agreed that Daimler Trucks would acquire a majority stake in Torc Robotics. Daimler Trucks and Torc announced they would be joining forces in a one-of-a-kind combination to commercialize highly automated trucks (SAE Level 4) on U.S. roads.

Torc has tested its on-road and traffic capabilities in demo self-driving cars that successfully logged robotic testing in more than 20 states while operating on both public roads and closed courses with zero accidents. The testing included a coast-to-coast trip across the United States and extensive driving in densely-packed streets such as those located in Las Vegas, Nevada. Torc’s inclement weather capabilities were featured at CES 2019.

Torc believes that successful commercialization of self-driving technology is best accomplished through close partnerships. In addition to Daimler, announced partnerships include Caterpillar, AAA Northern California Nevada & Utah for developing safety criteria through testing on public streets and closed courses. In January, Torc and Transdev announced a partnership integrating Level 4 self-driving technology in an i-Cristal shuttle, that is currently undergoing route testing in France and scheduled for commercial operation this year.