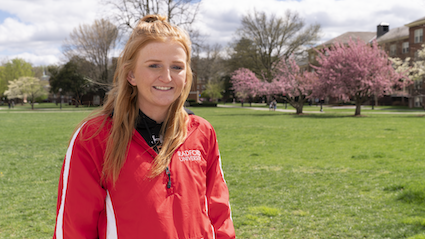 Raney Swanberg ’19 came to Radford University open to possibilities and ready for growth. Through her involvement in a multitude of activities at Radford University, Raney discovered her true self and what she was meant to do.

Raney comes from a military family and lived all around the United States and its territories before settling in Northern Virginia. Her family has since moved to North Carolina, but Raney spent six years in Virginia, making it feel like home. Her time at Radford University only reinforced that feeling.

“I have had so many things at Radford University that are pivotal to my development as a person,” Raney said. “I can’t imagine having gone anywhere else.”

Raney jumped head-first into student activities when she joined ROTC as a freshman. She made that decision because she knew that if she waited - if she hesitated - that she would not join ROTC at all.

“If I don’t attack something head-on, I won’t do it,” Raney said. “I like doing something from the start. If I am late or feeling like I’m behind, I won’t go to something or do something.”

By jumping in head-first, Raney built deep and meaningful friendships with the other cadets by participating in activities that other students do not have an opportunity to experience.

“We spent 20 nights over a summer in the field at Fort Knox in Kentucky,” she said. “We were all disgusting and miserable. People who haven’t done that won’t understand [what it was like].”

Another part of what led Raney to join ROTC as a freshman at Radford University was her family. Both her father and brother are in the Coast Guard, something that motivates Raney’s commitment to service.

“In my senior year of high school, I started thinking about joining ROTC,” Raney said. “Finally, one day, I just made myself join. If I hated it, I told myself I’d quit. If I didn’t try right then, I wouldn’t have done that later. It became a part of who I am. I can’t imagine not having done it.” 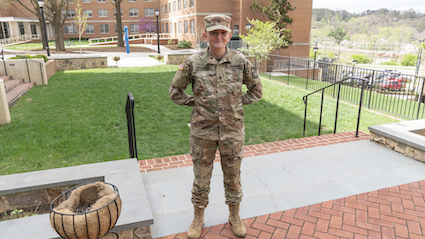 ROTC has completely changed Raney for the better. It has made her more disciplined, responsible and helped develop her into a leader.

“It’s really kept me really grounded,” Raney said. “ROTC was in the back of my mind whenever I made a decision and made me able to see the bigger picture in my life.”

As a junior, Raney became confident in who she was. Then, she was put into a platoon sergeant position and was in charge of 40 ROTC cadets.

“I was so nervous,” Raney said. “I was put in that position because they thought I needed to work on it. Then, I was also elected to the executive council for my sorority. Junior year was the best me I’ve ever been.”

Having increased responsibilities pushed Raney to grow as a person.

“I was happy all the time and doing everything,” Raney continued. “That was when I found who I was supposed to be – who Raney Swanberg really was.”

Raney’s involvement with ROTC led to the other opportunities across campus, too. Raney joined an all-female a cappella group, the Student Government Association and more.

“I love singing,” Raney said. “It’s hands down my favorite thing to do, and I didn’t do it my freshman year here. Joining the a cappella group was one of the best decisions I’ve made at Radford. I made friends with girls that I never would’ve seen on campus, mostly in the Department of Music.”

The opportunities are there for everybody – it’s just who wants to go out and take them.

Balancing all of her student groups made her feel like she was one person on weekdays and another on weekends, Raney said. “It was challenging to handle at times.”

Raney knew that she could handle it because of how her involvement ROTC pushed her to grow.

“There’s always time,” Raney said. “You just have to make the time. You’re never too busy for anything. I honestly believe that. I’ve been so busy, but there’s always room for more if you care about it.”

Through her involvement, Raney made her Radford University experience one-of-a-kind.

“I graduated in May and know that I didn’t waste a second of my time at Radford," Raney said. "I used all the resources I could. I became the person I am supposed to be at this University because I wanted to. I found the opportunities that fit me, and I gave everything I had to them. I made the Radford experience my own. I did stuff that I’ve always wanted to do.”

Since graduation, Raney is an active duty quartermaster handling logistics and supply in the Army. In January 2020, she will participate in an officer and leadership training course and then advance to her first duty station.

Raney knows she will be able to handle it – all because of how she grew as a person while at Radford University.