From Radford’s airwaves to NPR’s: Dave Mattingly ’86 took advantage of his opportunities as a Highlander 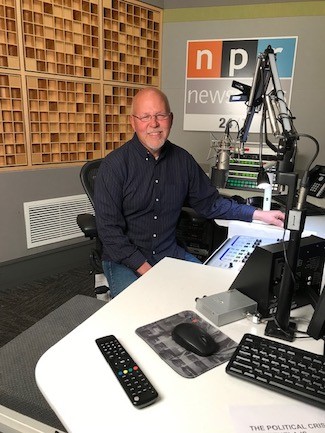 All this and more on Evening Update.

Anyone who listened to WVRU, Radford University’s student-run radio station, in the mid-1980s heard Dave Mattingly’s ’86 voice on the airwaves.

Mattingly credits the preparation and experience he received at Radford University in helping him achieve his goal of being a morning anchor at NPR. He got experience writing, anchoring and producing a newscast at WVRU – an experience that proved invaluable when looking for a job after graduation.

“You got a ton of experience doing everything you needed to do in journalism,” Mattingly said. “It launched a lot of us into internships in the summer because we had experience. One of the things I’ve always told people about Radford is that since it’s a smaller school if you want to get the experience you can get it there.

“WVRU is great because anyone who wanted to work in communications if they wanted to be in radio or media, it’s a great outlet for people to get the hands-on experience that they need to go out and get that first job when they graduate,” Mattingly continued.

Shortly after that, an opportunity opened up for Mattingly at WINC, a radio station based in Winchester, Virginia. After a couple more transitions, Mattingly found himself working for Standard News in Washington, D.C., where he was one of two congressional reporters for the network.

Then Mattingly got a call from a former coworker asking if he was interested in working at NPR. After he met with NPR’s news manager, the organization hired Mattingly in 1995.

“To be honest, I wanted to be on the air here,” Mattingly said. “When I first started here, it took some real adjustments for me because the staffs were much bigger, and the programming was much broader. There was this meticulous attention paid to every word that we broadcast. I wasn’t used to that. After a while, I learned to appreciate that. It’s an obsession for accuracy. It was different from what I was used to. It was more serious.”

Mattingly produced at NPR for about 15 years, and the more he produced, the more he realized he wanted to be on the air. An opening appeared in 2013 and Mattingly shifted over to on-air.

Mattingly said that NPR has a two-source rule for anything that they report. “We also have a standards and practices person who keeps an eye on the bigger picture and sometimes interjects with how we should be saying something. Everything we say that goes out is fact-checked.”

But the most difficult part about his job, Mattingly said, is giving an obituary.

“You sometimes have 20-30 seconds to sum up somebody’s life, their accomplishments and their career,” Mattingly said. “That’s the only thing that makes me nervous when writing a newscast. I pretend that the person’s family or friends are listening. What can I say in 20 seconds where someone will go that was an accurate description of who that person was.”

Mattingly hasn’t forgotten what helped launch his career. Mattingly and his wife, Jen Mattingly '86, started a scholarship to help students interested in journalism.

“We wanted to give back like so many other people do,” Mattingly said. “I owe so much to Radford and to WVRU that I had always wanted to do something to give back. I would not have the job that I have now, the career that I have, if not for WVRU. There’s no question about that. All the experience that I got working at WVRU and working with the Tartan helped me get my first job. When employers see the body of work that you have that the other folks don’t have, you can rise to the top. That is where Radford separates itself from other schools in my opinion.”

While at Radford University, Mattingly recalled a time in which friends visited from Auburn University, one of which was studying communication. “He asked what I was doing, so I told him. He said he was jealous of how I was on the air every day because he was on a long waiting list. That was the day when it clicked that I was in the right place.”

Attending Radford was more than a means of a job for Mattingly. He met his wife, who works at an elementary school in Loudoun County, while a student and is still in contact with professors and friends from his time on campus.

“It’s amazing how those ties branch out. You never know who you will come across that went to Radford,” Mattingly said.

One such instance is that Mattingly’s wife’s boss went to Radford and was a resident assistant (RA). His wife also attended Radford and was an RA. Mattingly ended up coaching the boss’ son in soccer for years.

People still hear his voice on the airwaves – just now on the national network of NPR. But back in the 80s, when Mattingly and the rest of the team wrapped up the 5 o’clock newscast, a familiar phrase would be broadcast across on 89.9 FM:

For all of us at WVRU News, have a good evening.