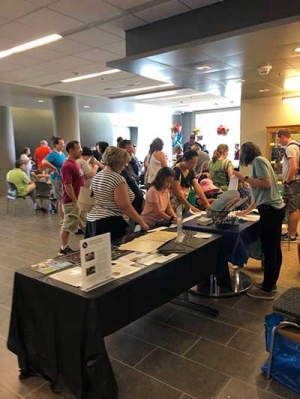 Visitors enjoy activities in the Center for the Sciences during the Apollo 11 celebration on July 20.

A colossal campus and community wide collaboration on July 20 resulted in an epic celebration of the Apollo 11 mission to the moon.

The event, organized by Rhett Herman in Radford University’s Physics Department and numerous campus and community partners, showcased the University’s engaging and compassionate faculty, staff and students, as well as its commitment to providing educational and fun experiences for the public to partake.

An estimated 1,000 visitors to the Center for the Sciences enjoyed the daylong celebration of the 50th anniversary of Apollo 11.

Activities for all ages included: a rocket building and rocket launching station; a special Apollo 11 display in the Museum of the Earth Sciences; a spectacular full-dome planetarium show called “Moon 19;” interactive displays and programs led by Artis College of Science and Technology and Virginia Tech Physics Outreach faculty; creatively-themed food and beverages, including the popular space drink, Tang; a family-friendly painting workshop led by Terri Welch of Wine & Design in Christiansburg; a NASA-themed craft station sponsored by McConnell Library and the Radford Public Library; and other activities provided by Wonder Universe Children’s Museum.

“I know that everyone involved volunteered their time, but the children’s faces – and the adults who were reminiscing about that day – made it all worthwhile,” Herman said, reflecting on the successful celebration. “And, I’m hoping that perhaps one child - or maybe more - who came to our celebration has now decided to look ahead and is determined to be the first human to step on Mars.”

One child, in particular, especially enjoyed the day with his mother, Radford University alumna Rachel Potter ’08.

“The experience went above and beyond anything we could have dreamed,” said Potter, who attended the event with her young son, Caleb. “Caleb was in his element, and every person we had contact with was amazing. They listened to him and his excitement over space and Pluto and everything in between. It gave me hope for Caleb’s future. I could see him studying physics and space like the people we encountered there. It made my heart swell.”