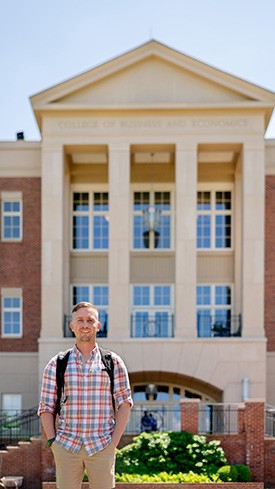 Greg Capps ’19 never thought he would attend college growing up.

He was the top scholar for both economics and philosophy for the 2018-2019 academic year and will be attending law school in the fall.

Greg’s journey did not start off easy. His parents had him when they were both teenagers – and worked hard to support their family. At 16, though, Greg started working so he could help pay for school clothes and his lunches. At 18, he got a full-time job.

As the end of high school approached, Greg realized he wanted to go to college. In the year after graduation, he brainstormed ways to make his dream a reality.

Greg stumbled upon the military and the G.I. Bill, which can pay for 100% of tuition and fees if 36 months are served.

“After I found out that I had a means to getting an education, I went and enlisted,” Greg said. “There are definitely a lot more options if you go to school. I didn’t need to go to school – I wanted to. I want to know everything about the world and how it functions.”

Six months after enlisting, Greg shipped out to Fort Campbell before being deployed overseas. Greg served with the 101st Airborne Division of the Army in the eastern region of Afghanistan as a combat medic.

“It was exhilarating,” Greg said about his service. “I was doing something that I really believed in. I wasn’t over there to fight. I was a combat medic, and my job was to save lives. I treated people indiscriminately. American soldiers, allies, sometimes I would treat enemy combatants. I was just there to help people. I felt like I was contributing and being a positive force.”

While in Afghanistan, Greg did not stay at one of the large American bases. He lived on a forward military base, which is a secured position by the military. There, he worked, trained and served alongside the Afghan soldiers.

The area in which Greg served, the Sirkanay District, is known as Death Valley, because of the high amount of conflicts and engagements compared to the rest of the country, he said.

“It’s chaotic and stressful,” Greg said. “It’s an area that you go to and you feel like you’re making a bigger impact. I was fortunate with that. And I got to work with a bunch of great people.”

One of the major impacts that Greg had while serving was helping a medical officer with the Afghan Border Patrol, was to create an evacuation plan and regular medic training regimens. Greg worked on that for four to five months to improve their ability to respond to situations. 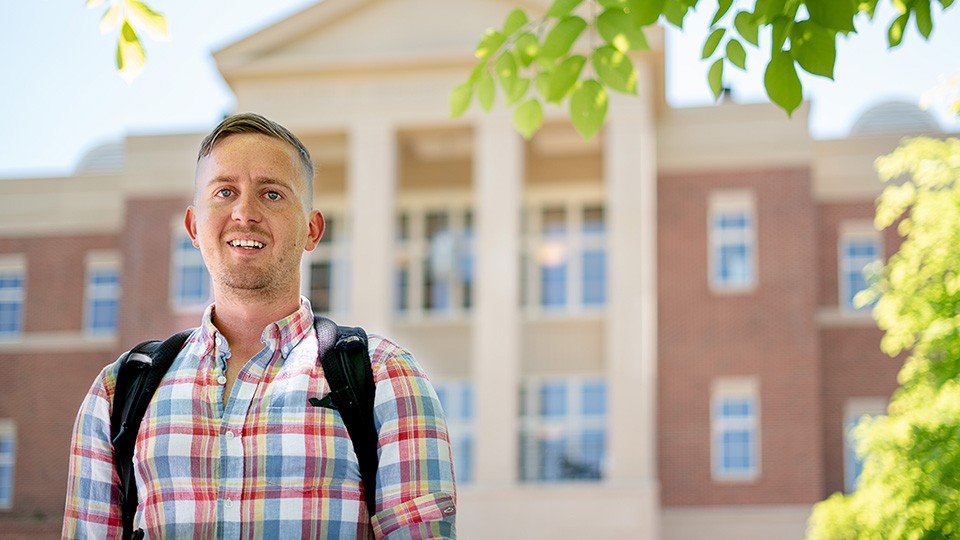 “I took a map of his entire area of operations and determined the shortest lengths to the nearest hospitals, so if people got injured in certain zones, they knew where to take them,” Greg said. “We had routes that were organized based on safety and chances of IEDs.”

Greg could see the growth of the Afghan soldiers through his work with them. “I could see that what I was doing every day was making a difference,” he said. “I could physically see the reports and the plans, see the maps and see their skills improving. I saw their logistics improve.”

A combat medic has no off time when serving. “That definitely kept me going,” Greg said of the Afghan soldier’s improvement.

For his dedication and service, Greg was nominated for a Bronze Star.

“By the time I got out of the military, I had my eyes set on the prize,” Greg said. “I knew what I wanted to do. I was focused, and I took school seriously. I was always aware of what I had gone through to get to this point. I wasn’t going to waste it.”

I had never experienced a debate where we disagree, but maintain civility and be genuine with each other. That’s the best part of education for me.

When Greg was discharged from the military, his wife was a graduate student at Radford University. Being from nearby Pulaski, Greg liked the idea of being close to home. Combined with Radford’s size and student-teacher ratio, he became a Highlander.

“I felt at ease,” Greg said. “I love the size of the campus. The buildings for the two majors are on opposite sides, and I can still get from end to the other in less than 10 minutes to take classes back to back.”

From his time in the military, Greg matured and gained time management skills.

“Over there, you don’t have days off,” Greg said. “You work all the time. You have a ton to do, especially as a medic. Every day when I got back, I’d have to resupply and restock. I’d go through everything, inspect and make sure everything was good to go in case something happened. I’d set up medic evac plans for the next day and try to make sure I got everything done fast enough so I had a little time for myself.” 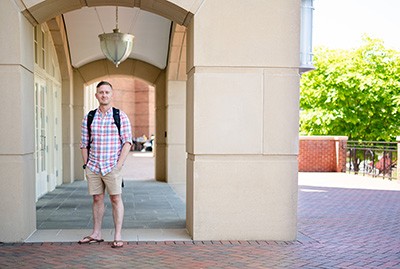 At Radford University, Greg appreciated the diverse academic environment and the ability to have deep and meaningful discussions with classmates and professors alike.

“I had never experienced a debate where we disagree, but maintain civility and be genuine with each other. That’s the best part of education for me,” Greg said.

“He’s a smart guy and does a great job of being unbiased,” Greg said. “He does a wonderful job of presenting arguments for both sides.”

Because of Greg’s academic performance, he received scholarships for law school where he is going to continue his education.

“It’s awesome looking at a professional degree a few years after I didn’t think college was at all possible,” Greg said.

Greg embodies the spirit of a Highlander and the call to help others through his dedication and commitment to academic excellence and to selfless service.