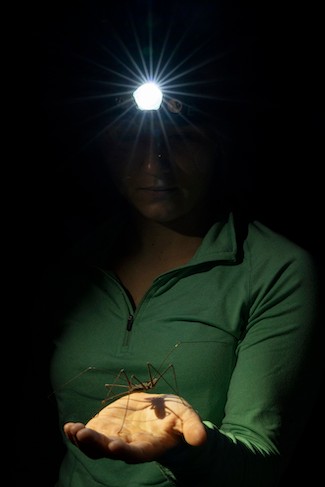 Kateri Schoettinger during a night walk in the rainforest.

When junior student-athlete Kateri Schoettinger, a member of the women’s soccer team, stepped off the plane and into the jungle, she fulfilled a long-term goal of hers: participate in the renowned Radford Amazonian Research Expedition (RARE) Program at Radford University.

As a student, Schoettinger knew she wanted to participate in as many opportunities as possible, including a study abroad. Schoettinger, a chemistry major, made that happen when she approached Associate Professor of Chemistry Kristina R. Stefaniak, Ph.D., to discuss water quality. Stefaniak recommended measuring the carbonic acid equilibrium and PH of the water in the jungle.

Schoettinger ran with the idea.

After locating six streams in the rainforest, Schoettinger took a densitometer to determine how much tree coverage was present and took a picture on her phone to count the pixels of the canopy and the sky.

“From there, I took a PH meter to measure the PH in the stream and I recorded that in my notebook,” Schoettinger said. “I went back at night and also recorded the PH for each stream. The first day I took data, the PH was more acidic in the morning and more basic at nighttime.”

Each stream followed that pattern – at least while Schoettinger’s equipment functioned. Upon reaching the jungle, Schoettinger’s water monitor was not connecting to her phone via Bluetooth. Regardless of the troubleshooting steps taken, no data from the probes registered.

“Luckily, I did find another PH probe that was at the station from a previous RARE trip, so I used that,” Schoettinger said. The backup probe allowed for the collection of data – until it also stopped functioning.

Overcoming challenges of data collection in a field environment is a major part of the trip, according to Paul Rosalie, a conservationist, author and guide for Tamandua Expeditions.

“They’re learning how to adapt their projects, because you have methods, but out in the field it’s a different story,” Rosalie said. “They have to adapt and push through.” 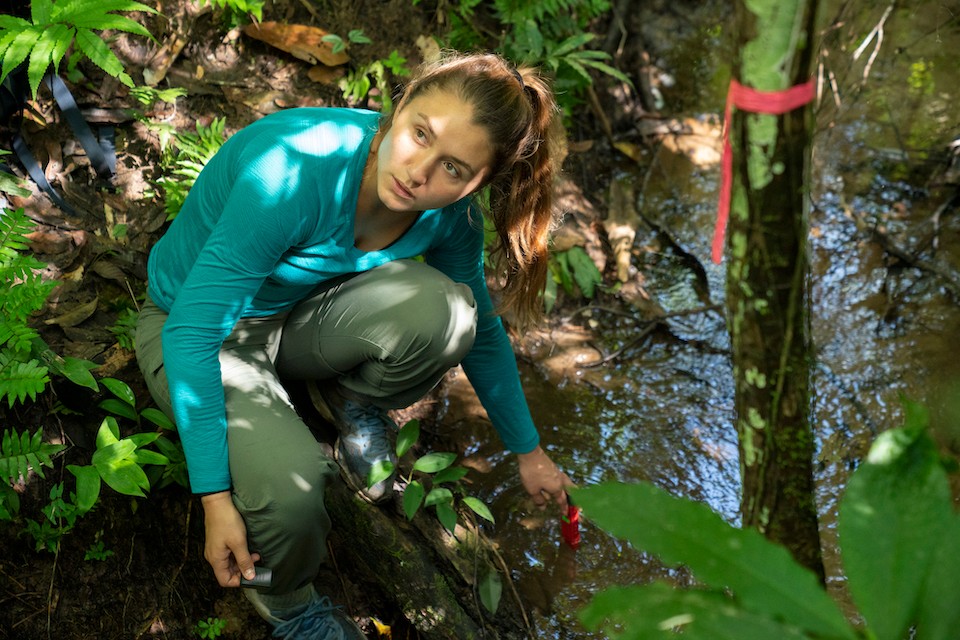 Schoettinger conducting her water quality research in the jungle.

For the data that Schoettinger was able to collect, she hopes to compare it to other regions of the world.

“I’m hoping to compare this data with water data in the New River Valley – and maybe Cincinnati, my hometown – by seeing the PH differences and apply this by seeing how much deforestation, which is represented by my open sky sample, could impact the water attributes,” she said.

The trip wasn’t just education for Schoettinger. She had to keep up with the demands of being a student-athlete. That means she had to continue her workouts in the hot and humid environment of a rainforest. “It’s hard to balance the time that you need to do your workouts and continue to work at your sport, while also giving the time towards academics,” she said.

Schoettinger went on a run through the jungle – darting through the lush and challenging environment. 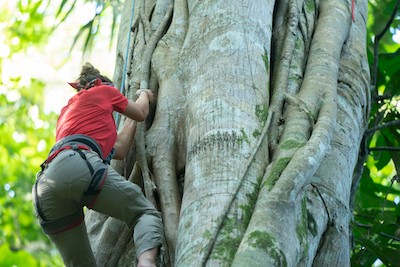 Schoettinger climbs an 85-foot tree on RARE's second day in the jungle.

“It was like a workout I had never done before. I was on these beautiful jungle trails and just running through it, it was so nice,” she said. “The air felt so pure. On these trails, I felt like I could go on forever into the jungle, as far as you can imagine.”

After a hike or an intense exercise regimen, Schoettinger and the other students on the RARE trip would swim in the river or the nearby waterfall.

“I found that fascinating, because even though we are in a world where we don’t know all the bugs and what is in the water, it is still so organic and everything here has been minimally touched by humans,” she said.

Like the other students on the trip, experiencing the rainforest and a challenging environment first-hand caused Schoettinger to grow as a person.

“The study abroad has challenged me to be very independent in my own project,” Schoettinger said. “We do have the guides, but there are only three of them that are there to take you around. You have to find your own way and have your own plan. I had some trouble finding the open canopy that I was hoping for, so you just have to be flexible. You have to have a lot of confidence and independence to do that.”

After returning from the rainforest, Schoettinger has increased global insight and a deeper understanding of the rainforest ecosystems, showcasing the invaluable life experiences that Radford University offers to its students.