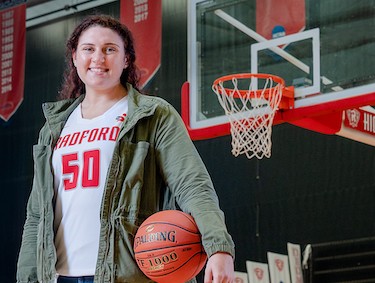 ‘Dominate at both ends!’

Student-athlete Sydney Nunley regularly hears that from the Women’s Basketball coaching staff. At a towering 6’4”, Nunley is proud of every inch and is described by those who know her as a “big teddy bear.” Warm and engaging, she is motivated by a deep-rooted belief in the power of a team.

Encouragement to dominate at both ends is a way for coaches to emphasize that Nunley can excel on the court, both on offense and on defense. This can also be applied to how Nunley dominates both academically and athletically.

She is now enrolled within the communications graduate program to continue her commitment to academic excellence.

Radford University Women’s Basketball Coach Mike McGuire often issues an important reminder to his players, “Be the best version of yourself.” This is something that Nunley has taken to heart and is demonstrating each and every day, whether in practice, during a game, while studying or in the classroom.

As a communications major, Nunley aspires to use her gifts, talents and education to serve as a public relations professional within the sports industry. Perhaps not surprising, her favorite course during her time at Radford University has been Teamwork and Communications.

“I feel like teamwork and being able to come together as a group off the court matters just as much as it matters on the court,” Nunley said. “We need each other to get the job done.”

What some may find surprising is the faculty member Nunley is closest to is from the Department of Mathematics and Statistics. Nunley found the course, Math for Human Society, to be particularly challenging. Through the support of Erik Sorenson, instructor of mathematics, she made it through the class and gained a mentor in the process. Nunley said, “He has just been my number one supporter from the faculty on campus. He emails me, goes to the games and has even met my mom. He has always been there to support.”

Hearing about all of her success and triumph, one might mistakenly think she has it easy. Nunley’s time at Radford University was difficult when she was seriously injured during practice. “I jumped up to get a pass, and I got stuck between two people and came down on my ankle completely sideways,” she said.  The result was tearing all ligaments in her ankle, which necessitated a complete ankle reconstruction surgery and a medical redshirt for 2017-18.

Nunley can still recall the frustration and discouragement she experienced as she slowly worked her way back to wellness only to reinjure her ankle. She remembers shedding tears in the doctor’s office as she realized she had lost a significant amount of strength in her ankle and leg, which would make a full recovery even more difficult.

“Sometimes it felt like I took four steps forward just to take six steps back,” she said. “But then, the next day, me and my trainer Katherine would work even harder. I couldn’t be where I’m at without them – everyone that has helped me.”

Nunley’s statistics are a testimony to the recovery she has made and the adversity she has overcome. She has made 10 consecutive starts for the Highlanders and has collected double-figure rebounds in each game, which includes a double-double her first seven starts, tied for conference-lead for that specific statistic. Nunley was also named Big South Conference Player of the Week twice in January and is second in the conference in rebounding with an average of 9.3 per game and 13.6 rebounds-per-game in conference play.

Coach McGuire knows that the injury was not just about her ankle, nor was it solely about getting back on the basketball court. It was about redefining in Nunley the will to persevere against odds – the self-determination to choose resilience.

“She has pushed through it, she has fought through it and now she is excelling,” McGuire said. “It was everything you’d want a kid to learn – and she is.”

The life lessons learned by Nunley on the court will undoubtedly serve her well, as she looks toward the future impact she hopes to make on the world and those around her.