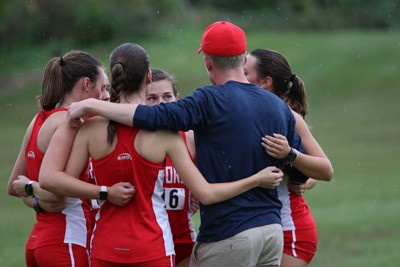 Members of the Radford University women's cross-country team huddle during a meet.

On the courses, the 12-person team rose to a fourth-place finish at the 2019 Big South Conference Cross Country Championships in Buies Creek, North Carolina. Led by second-year coach Sam Bradley, the team garnered a handful of Big South awards. Caitlin Apps was named Freshman of the Year, while Annsley Eckert earned Big South Conference All-Academic honors. Apps finished third at the conference final race and was the best of any freshman in the field.

Academically, the team is also setting records. They posted a 3.87 team GPA to not only lead the 17-team Radford Athletics program, but also place at the top of the national roster during the 2018 Fall semester for their excellent performance in the classroom.

“We are building a program that makes us very happy,” said Bradley. “A year ago, we ran five runners and finished sixth. Based on collective times in a variety of distances and meet placements, this is one of the best teams we have had. We are in a very good place.”

The pride and cohesion of the team is being built upon a foundation of academic excellence.

“Academics always comes first,” said Cayland Bond, a sophomore allied health sciences major from Roanoke, Virginia. “Running is an outlet for us all, as we share the struggles and challenges.”

Eckert is a junior nursing major from Lynchburg, Virginia, who, was embarking on her nursing career with a series of clinicals that had her commuting to local hospitals, while training and competing.

“The team is my break from school,” said Eckert, who leads the team academically with a 4.0 GPA. “Running keeps me in shape and ready. It is so much fun and provides a place where I can be ‘me.’”

Eckert was pleased by the way things worked out for her as she pushed her athletic and professional boundaries.

“Seeing I could improve as a runner, while studying nursing, was very validating.” Eckert said. “I reached some of the best times of my career, including one race where I gained a minute over my previous best time.

Personal bests or personal records are important milestones for runners, and the team prides itself on marking individual progress, alongside their collective success. At the season-ending NCAA Southeast Regional, Eckert set a new personal record and moved up to fifth on the program's list of all-time fastest 6K times. Bond followed Apps across the finish line closely at Charlottesville and set herself a new personal record to break when the season starts again next fall.

“This year, I feel like I took a big step forward. I set personal records in three races and felt like I was improving right along with team,” Bond said. 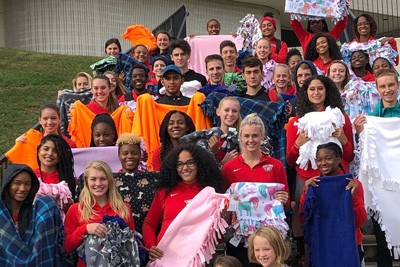 The women's cross-country team makes and distributes blankets in support of Project Linus.

The team is coming together on and off the race course. Aligned with Radford University’s core value of community, the team ensures they make time to serve others.

One recent service opportunity involved making and distributing blankets, as part of Project Linus. According to their website, the organization’s mission is to, “Provide love, a sense of security, warmth and comfort to children who are seriously ill, traumatized, or otherwise in need through the gifts of new, handmade blankets and afghans, lovingly created by volunteer ‘blanketeers.’” The team was more than happy to serve as blanketeers and provide a tangible demonstration of care and compassion through their efforts.

“The blankets are beautiful and cuddly,” said Bond. “It is a nice feeling, helping others.”

“We had such fun doing the blankets," said Eckert. “We were all sitting around talking and laughing. It was like an old-fashioned sewing bee and a nice way to spend a Saturday.”

In addition to making and distributing blankets in support of Project Linus, the team has a full slate of community service initiatives. They have volunteered at the annual Special Olympics meet, they pitch in to help out at area schools’ field days, and they read to the students at the Radford Early Learning Center.

Eckert and Bond are proud of the emergent success they enjoyed this year and are aware that they are enhancing Radford women’s cross country’s proud heritage. Alumnae runner Carrie Keevey ’17 earned all-conference honors at the 2017 Big South Cross-Country Championship and their Highlander cross-country predecessor Teresa Williamson ’15 was named the prestigious Big South Conference Female Scholar-Athlete of the Year in 2015.

“We are carrying on a strong tradition, so it is easy to take the attitude ‘This is my best.” And, then, go for it,’” said Eckert.

Bradley is impressed by and grateful for the team’s attitude and commitment.

“We took a big jump from sixth to fourth place. It really validates the work these women have done and reflects this young group’s buy-in,” Bradley said.