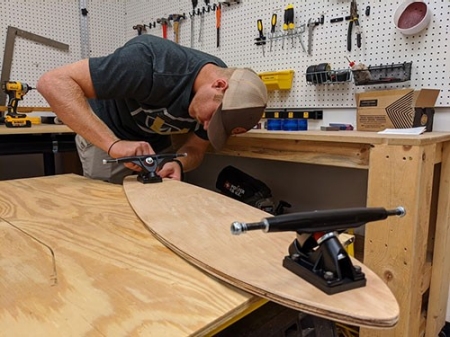 Colby Higgerson builds a skateboard he designed with the help of two Department of Design faculty members. Higgerson presented his work at the Winter CARD program.

Three hand-crafted skateboards sat in front of Colby Higgerson during a presentation at the inaugural Winter Creative Activities and Research Days (CARD).

One was complete. The two others were board frames. The senior Business Management major from Chesapeake, Virginia, constructed the skateboards in one of the campus’ MakersSpaces.

“We decided to start with something smaller, so he could work through ideas and challenges around different materials, wood grain and strength, and shape and form as it pertains to functionality,” Parsons explained. “As a final challenge, we worked with an open source skateboard design and made modifications through two separate iterations.”

The project fit perfectly with the Winter CARD program, Parsons said “as an exercise in iterative design, action research and making.”

The skateboards “are really, really neat, and it was a great project” said Radford University Head Baseball Coach Karl Kuhn, who along with a number of his players, walked into the Davis College presentation room to support – and surprise – their teammate. “Those designs are very artistic and show exactly what Colby is capable of doing.”

Kuhn knows it is sometimes difficult to be alone when presenting to groups of people, he said, “So, I thought it would be nice if he had 30 familiar faces around to give him support.” 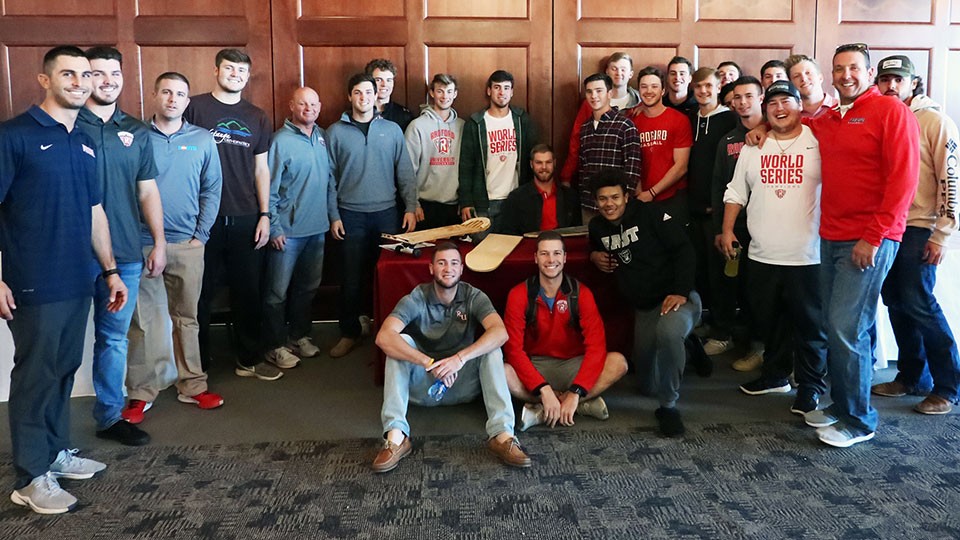 Coach Karl Kuhn (fifth from left) and members of the Radford University baseball team supported teammate Colby Higgerson (sitting behind the table) during his presentation at the inaugural Winter CARD program Dec. 4.

Throughout the semester, Ligon focused her research on a Douglas fir that Maxwell collected samples from during a summer 2019 research trip to a site in northwestern Wyoming, just outside Yellowstone National Park.

Parts of her research revealed a “standardized tree-ring chronology representing average tree growth,” at the Wyoming study site, she said. Other areas explored a “comparison of tree-ring chronology to a reconstruction of stream flow” of the Snake River, which runs through parts of Wyoming. 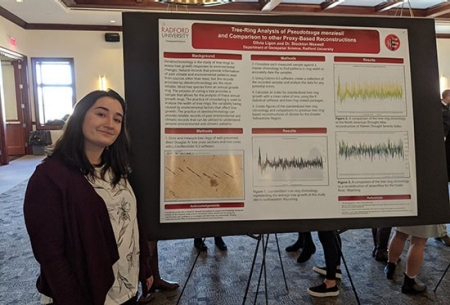 A final piece of the project for Ligon was presenting her work at the CARD event.

Maxwell, following his mentorship of Ligon’s tree-ring analysis project, said the new Winter CARD program was a terrific opportunity for students to present their research in a welcoming atmosphere.

“The interdisciplinary nature of the program encourages interaction among students and faculty,” he said. “I think that more programs will incorporate both the Winter CARD and Spring Engagement Forums as part of their curricula. Being able to communicate your work to those outside the discipline is a critical skill we need to foster.”

Katie Sisk, a freshmen Criminal Justice major from Princeton, West Virginia, gained valuable knowledge and skills about communicating her research at the event. Sisk and research partner Gracie Osborne, a freshman from Marion, Virginia, spoke to passers-by at the event about delving to the science of using forensic entomology to calculate time of death for humans at, for example, a crime scene.

Presenting was “nerve-racking,” at first, Sisk said, but she quickly became comfortable talking about her project.

“I feel accomplished,” Sisk said, now that the research is finished and the presentations are done.

Winter CARD, sponsored by the Office of Undergraduate Research and Scholarship (OURS), was designed to build upon the successful tradition of already-established student research events, such as the Spring Student Engagement Forum and the Psychology and Gender Research Symposium, which along with the Department of Health and Human Performance’s Presentation Day, was part of the event.

Stretched over three days and four campus buildings, Winter CARD gave Radford University students an opportunity to share their work and research with fellow students, as well as faculty and staff. The event culminated with a December 4, 2019 round of poster presentations on the third floor of the Davis College of Business and Economics.

More than 400 students participated. Many of those were freshman and sophomore student researchers, an event priority for OURS Director Joe Wirgau, Ph.D. He wanted to help “relatively inexperienced” researchers gain a valuable understanding in what it takes to present their work to their peers. For those with little experience presenting, that can be an intimidating endeavor.

“A number of students remarked to me, unprompted, that it wasn’t as scary as they thought it would be and they were glad they did it,” Wirgau said.

After concluding the event, Wirgau reflected on the experience and the initial run of Winter CARD was “nothing short of a success.”