A Radford salute as veterans share stories of resiliency, fortitude 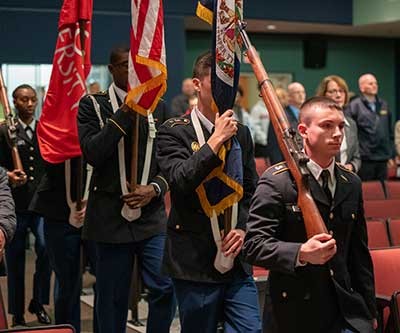 Radford University Highlanders gathered on Veterans Day to honor and celebrate those who have proudly served our nation and protected our freedom.

At a special ceremony on November 11, students, faculty, staff and community members gathered in the Bonnie Auditorium to hear from a variety of guest speakers, including student, faculty and alumni veterans. The service men and women shared stories and messages of bravery, honor and resiliency.

The annual event is a time-honored Radford University tradition that is sponsored by the University’s Military Resource Center (MRC), located on the fourth floor of Russell Hall. Members of Radford University’s ROTC opened the ceremony with the posting of the colors, followed by a stirring rendition of the National Anthem, sung by Isabella Stinson.

Artis College of Science and Technology Assistant to the Dean David Horton, who also serves as the mayor of the City of Radford, welcomed guests on behalf of the City and thanked veterans in attendance for their service. Veterans, representing every branch of the military, were asked to stand and were recognized with applause from the audience.

On behalf of Radford University’s student veterans, Dakota Dillow, of the United States Air Force, spoke about resiliency and life after military service. A husband and father to a young son, Dillow is currently pursuing an anthropology degree in the Artis College.

Dillow said he discovered newfound strength and mentorship at Radford University through conversations with faculty, staff and fellow students in the MRC.

“We all have a purpose and a mission,” Dillow said. “It’s important to stay on that path, to communicate and tell your story.”

Assistant Professor of Criminal Justice Roberto Santos, a veteran of the United States Marines Corps, said his journey in the military also began with a shared story.

On the verge of not graduating from high school, Santos was mentored by a police officer, who steered him toward joining the Marine Corps. After four years of service, Santos went into policing, a decision made in honor of the police officer who inspired him.

“I wanted to continue to give service to someone,” Santos said.

Now, as an assistant professor and well-known subject matter expert in a number of criminology processes, Santos is inspiring hundreds of students pursuing criminal justice degrees in Radford University’s College of Humanities and Behavioral Sciences.

“I attribute my ambition and leadership to the Marine Corps,” Santos said. “Now, I’m giving service to our students and helping the next generation.”

Keynote speaker, retired Maj. Gen. Margaret B. Poore ’86, concluded the ceremony with a powerful speech in which she chronicled her family’s storied history in the military.

Poore graduated in 1986. A year later, she was commissioned into the United States Air Force. She served 30 years in a number of capacities and has since retired as the commander of the Air Force Personnel Center, Joint Base San Antonio-Randolph, Texas.

Poore is a fifth-generation career officer of the military. Many of those family members, she said, endured conflicts, such as World War I, World War II, Desert Storm and the continued war against terrorism.

“Their stories and personal experiences are important to our history and our heritage,” Poore said. “On this Veterans Day, I encourage you to ask a veteran his or her story. Ask one of the more than 240 students on this campus who are attending college on the G.I. bill. Everyone has a story to share.”