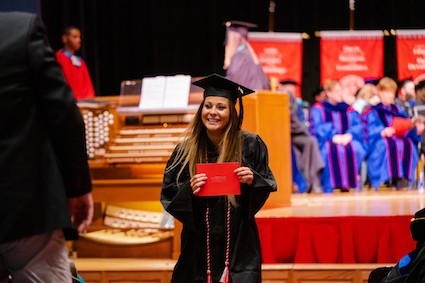 A proud Highlander smiles after walking across the stage at Winter Commencement.

At the 2019 Winter Commencement on December 14, 2019, Radford University conferred degrees upon 562 undergraduate students and officially welcomed its newest group of Highlander alumni.

“Like everyone here today, I am immensely proud of each of you, “Radford University President Brian O. Hemphill, Ph.D., said. “You are now graduates of one of the finest universities in the country.  Without question, your degree from Radford University will take you far, as far as you want to go.”

Radford University Board of Visitors Rector Robert A. Archer reminded graduates that their degrees will serve them well in life.

“These are exciting times to be a Highlander,” Archer said. “Radford University has made great strides over the last few years in ensuring that the education you have earned has true value and indeed provides a strong basis for future learning and success throughout your life.”

The University held two separate ceremonies inside Preston Hall’s Bondurant Auditorium, awarding degrees during the first ceremony to graduates from the College of Humanities and Behavioral Sciences and the Waldron College of Health and Human Services.

At the second ceremony, degrees were awarded to graduates from the Artis College of Science and Technology, the Davis College of Business and Economics, the College and Education and Human Development and the College of Visual and Performing Arts.

Faculty Senate President and Professor of Anthropological Sciences Jake R. Fox, Ph.D., encouraged the graduates to be life-long learners. He spoke to the graduates with gratitude for the time he and fellow Radford faculty had working with them.

“Thank you to each of our graduates for choosing Radford University. It has been our privilege to work with you, to teach you and to learn from you,” Fox said. “This place has been changed by you and by your contributions inside and outside the classroom. Each of us, your faculty, have been changed by your time with us. Your success has made Radford University a better place than what it was before you arrived.” 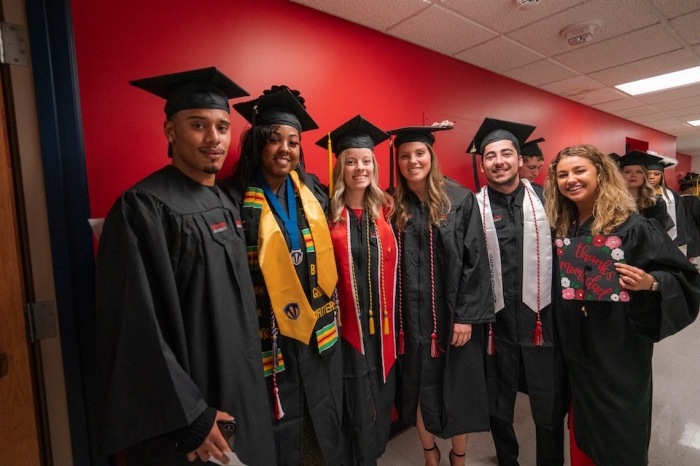 A group of proud Highlanders pose for a picture at Winter Commencement.

Student Government Association President Colleen McNickle ’20 reminded the graduates of the indelible impression they have made on the University and encouraged them to go “make your mark on the world,” she said. “I believe that once a Highlander, always a Highlander, and you will carry this university with your where ever you go next.”

Before the first ceremony began, Rachel Lewis, a psychology major from Mount Jackson, Virginia, reflected on her time at the University and the moments ahead.

“I’m super excited,” she said. “This has been four years of hard work, but you get such a well-rounded education at Radford. I’ve had a lot of great experiences here working with people.”

Before the day’s second ceremony, four graduates, who were computer science majors and have become “really good friends,” stood outside the auditorium talking, laughing and snapping photos with their phones. All four – Jordan Scott, Paul Nii Aboagye, Cameron Mims and Joseph Ray – either have jobs lined up or are well on their way to securing a position in their field.

“We met freshman year and stuck through it,” said Mims of Gainesville, Virginia.

They all agreed their time at Radford helped pave their way to future success.

“Radford prepared me well by teaching me a strong work ethic and good study habits,” said Scott, a Virginia Beach native, who soon will be working in the industry. “I met a lot of great people and a lot of great professors.” 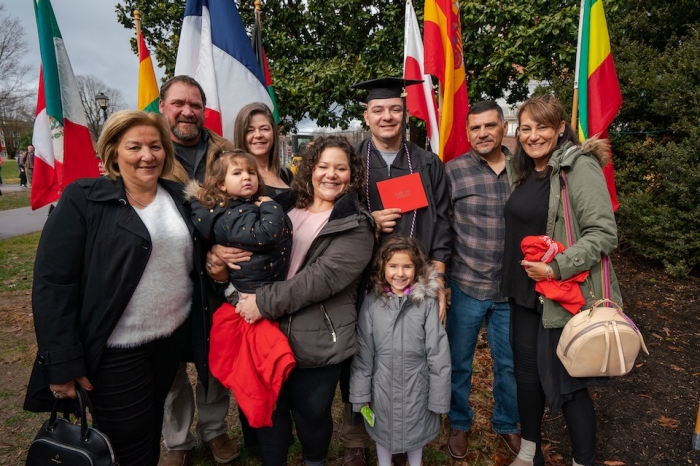 Juan Martinez '19, center, celebrates his graduation with his family.

Moments later, Kaylin Walton and Kayla Huff, both of whom are from Roanoke and were Health and Exercise Science students, stood outside as Kaylin’s mother, Kelly England, took photos of the two friends in full regalia.

Afterward, England spoke of the pride she has for her daughter.

“She set a goal and accomplished it,” England said of Kaylin, who wants to work in strength and conditioning or as a personal trainer. “She worked the entire four years through college, never missed a day of work and never played hooky in her classes. She’s a really hard worker.”

Reflecting on her time at Radford, Skyler Cumbia, a music therapy major from Hanover, Virginia, said, “It’s been a long road, but it’s been a good one.” She stood under an awning talking with her mother, Hope; father, Allen; and grandmother, Maxwell, outside Preston Hall, moments before the first ceremony commenced.

“We’re so proud of her,” Allen Cumbia said of his daughter. “We’re over the top proud,” Skyler’s grandmother, Maxwell Cumbia,” chimed in.

The majority of Winter 2019 graduates, representing 84%, were Virginia residents. The remaining graduates came to Radford from Maryland, North Carolina, California and Washington, D.C.

One hundred and thirty-nine graduates received degrees in science, technology, engineering, mathematics and health (STEM-H) disciplines. The most popular major was Psychology with 54 graduates. Criminal Justice was the second most popular with 44 graduates followed by Exercise, Sport and Health Education with 43 graduates and Business Management with 41 graduates.

The number of first-generation graduates totaled 210, representing 30% of the graduating class.

Graduates ranged in age from 20 to 55, and five graduates celebrated birthdays on Commencement.