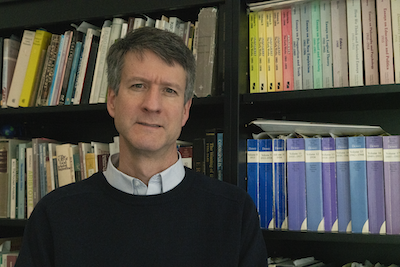 “The simple truth is that I said yes because it was an honor, both personally and professionally,” Fesmire said. “Dewey arguably remains the most important philosopher America has ever produced, and Oxford University Press was asking me to help chart a course for the future of research engaging his work.”

The task that Fesmire undertook was daunting: guiding 40 contributors to complete a volume more than 800 pages. Fesmire also wrote a comprehensive introductory chapter and contributed a chapter of his own on Dewey’s ethics.

“The Oxford Handbook of Dewey” reflects an exponential growth of interest in Dewey and American pragmatism across academic areas and philosophical traditions during the past three decades and will help researchers access particular aspects of Dewey’s thought, navigate the rapidly expanding literature and participate in current scholarship in light of prospects in key topical areas, such as ethics, politics, science, technology, education, aesthetics, mind, logic, culture and religion.

One of the ways this volume is relevant to students, including students at Radford University, is helping students navigate complex problems.

“Whatever their personal and professional aims may be, Dewey has a careful distinction between what people intend to do and what they’ve actually done,” Fesmire said. “He discussed this as the ‘ends-means continuum.’ Most of the chapters in ‘The Oxford Handbook of Dewey’ take up this topic in some form. Choices are filled with unanticipated connections, so we usually do more than we mean to do.”

“Both books explore the lack of fit between ‘my way or the highway’ moral fundamentalism and the messy problems of our place and time,” Fesmire said. “We must see how far we can go toward replacing the current one-way-street moral and political mentality with a context of democratic social inquiry.”

The Oxford Handbook Series offers surveys of original research in a specific subject matter featuring essays from leading researchers in that respective discipline. Oxford Handbooks are often used by scholars, graduate students, and advanced undergraduates in the humanities, social sciences and sciences.