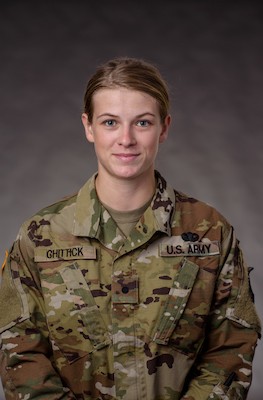 A lot of work was put in by Chittick to reach that point – with most of it behind the scenes. When Chittick found out that she had been ranked the ninth-best cadet in the nation, she realized all the work she put in was worth it.

This past summer, Chittick learned that she had the potential to be ranked. As part of the preparation to become a lieutenant in the U.S. Army, cadets compete nationally for the rankings prior to commissioning.

The rankings, facilitated by U.S. Army Cadet Command, are comprised of a multitude of factors, including GPA, physical fitness and leadership. Each factor is assigned a certain amount of points before everything is aggregated, and the rankings are released.

Chittick, a biology and chemistry major from Owings, Maryland, was working on a paper for one of her chemistry courses when her professors walked into the study room and said, “Oh my gosh, you’re number nine in the nation!”

“All my friends were there, so it was really exciting,” Chittick said. “I was overwhelmed, and I was surprised, because I didn't really know if I hadn't made into the rankings.”

Chittick’s inspiration to join ROTC came from her mother, who was also a cadet in college. When she told her the news, her mom was ecstatic.

“She said this was huge,” Chittick said. “I couldn’t have done it with both of my parents’ support, so I’m really happy I got to share something like this with them.”

“At Radford University, you have the opportunity to have increased interaction with your professors and your peers,” Chittick said. “It's a very close-knit community. I know all my professors, and I talk to them daily. If I have questions, they're all always very helpful. At Radford, you have the ability to get the most out of your education.”

Opportunities at Radford – such as being an RA for three years – allowed Chittick to flourish and grow as a Highlander, a cadet and a person.

“I used to be very uncomfortable doing presentations. I was very hesitant and very nervous,” Chittick said. “Now, I'm very direct and involved. I think being at Radford and being a cadet really helped my confidence in being able to interact with different kinds of people. I've participated in a lot of training events with people from all over the world. I’ve been able to see and interact with people with all kinds of global perspectives.”

Through academic and extracurricular opportunities at Radford University, students, such as Chittick, are discovering their true passions, achieving great success and making a lasting impact.