Sinclair Constantine Allen: A moment worth waiting for 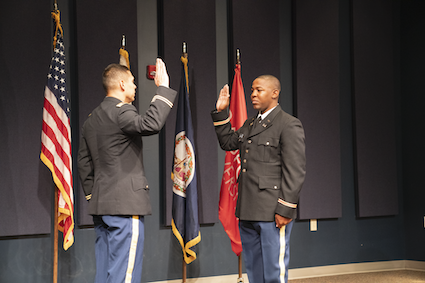 Sinclair Constantine Allen ‘19, of Haymarket, Virginia, stood on the stage as Colonel Paul Mele officiated his commissioning ceremony. Sinclair soaked in that special moment and reflected on what it took to arrive at that landmark occasion.

A once-in-a-lifetime occasion, something he had worked his entire collegiate career toward achieving.

Sinclair’s journey to Radford University began when he was searching for top schools for the program in which he wished to major – recreation, parks and tourism. While visiting Radford, Sinclair met with some of the ROTC representatives, who got him hooked on the idea of being a cadet.

“No one in my family is military at all,” Sinclair said. “The only real reason I initially joined ROTC was for that structural reinforcement. As I was transitioning from high school, I wanted a rigid structure and wanted to be a part of a collective group of people who are generally like-minded and highly-motivated.”

That structure paid off for Sinclair. The discipline required to be a cadet helped him adjust to college life and enabled him to excel academically.

“ROTC gave me a regimented mindset towards how I approached school and how I was living day to day,” Sinclair said. “I always knew at the end of the day that I'm going to have to set my alarms, I'm going to wake up and I have to go to PT. I became very regimented in my actions. A lot of what I did was very deliberate toward making sure I was staying within the standards ROTC asked the cadets to meet.” 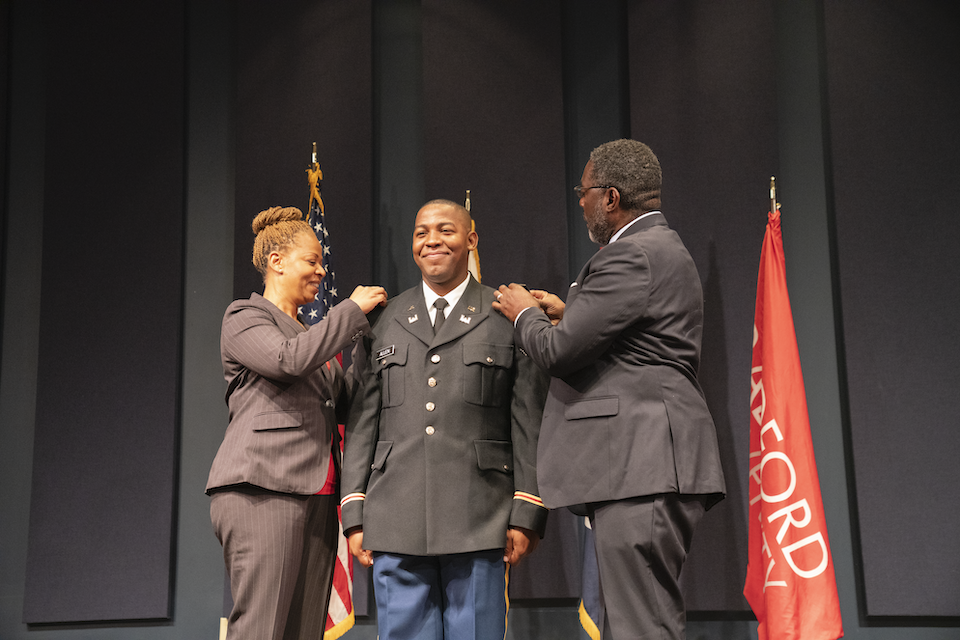 Sinclair's parents pinned him during the commissioning ceremony.

Being a cadet means facing obstacles, and Sinclair was no stranger to overcoming adversity. Joining ROTC is a major time commitment, which presents numerous challenges related to balancing competing priorities.

“For a lot of people, when they join ROTC, it can overrun your life and become the only thing that you do,” Sinclair said. “So, trying to make sure I could balance myself so I was more than just in ROTC was a big challenge for me.”

The biggest challenge for Sinclair was making sure that he graduated within the timeline that the U.S. Army wanted. Sinclair had a slight delay regarding graduation, having to complete an internship requirement for his major. That delay meant he did not graduate in the spring and was not commissioned with his peers.

“I was in a weird limbo area of making sure I got my paperwork done, and my internship credit was applied. Then, I got my degree on paper, and the military could move forward,” Sinclair said.

After clearing those unexpected hurdles, Sinclair earned his degree and his commissioning ceremony. 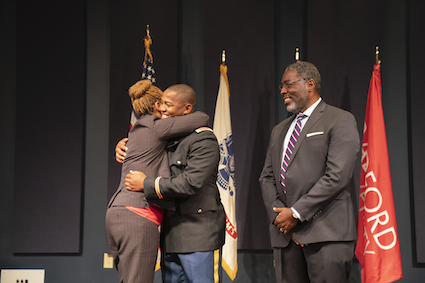 Sinclair hugs his mother after the pinning.

Back to that moment. Standing on the stage, Sinclair was ready to be pinned as a 2nd Lt. and as an engineer in the U.S. Army Reserves.

The endless support of his family and parents made that moment possible – a moment Sinclair was able to share with them as they pinned the bars on his uniform.

Sinclair soaked in that moment. It lingered just a little longer, as Sgt. 1st Class Brad Unterseher delivered the first salute after Sinclair was officially a 2nd Lt.

“It was an official recognition of all the things that I have done up to this point,” Sinclair said. “Having my family there was really nice. When I initially decided to do ROTC, they said this is a venture that I could pursue, and they would support me. But, it wasn’t something they understood. They're here to support me in everything I do.”

With the support of his family, friends, professors and mentors, Sinclair achieved something he had worked so hard toward – being a commissioned member of the United States Army.

After completing a basic officer leadership course, Sinclair will be stationed at Fort Belvoir in Northern Virginia.

Sinclair demonstrates the endless dedication Highlanders have to their communities, both near and far, and their academic studies. With the challenges and obstacles ahead on 2nd Lt. Allen’s journey, he will be ready, because of his experiences at Radford University.