From freshmen to graduate students, first day of classes is exhilarating 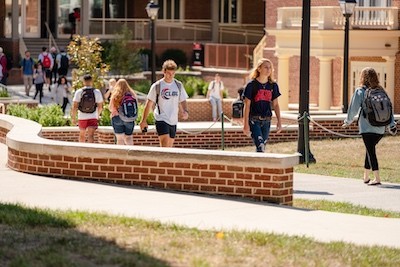 Students walk to class during their first week back on campus.

Lauren Destefani could not wait for her first class to begin on Monday. It was still 33 minutes away, but who’s counting?

She sat on a red picnic table on the Bonnie Plaza, sipping lemonade and talking about the summer and the upcoming academic year with her friend Amanda Radcliffe. The two lived together at Amanda’s parents’ home over the summer in Charlotte, North Carolina.

Lauren worked retail in a mall, and Amanda, a certified nursing assistant, worked as a home health agent. The summer was fun and productive, and it was nice, they said, spending time together. However, they were more than ready to get back to the Radford University campus to begin the fall semester.

“I just love it here so much,” said Lauren, a junior psychology major from Luray, Virginia. “I love being surrounded by the people and my friends here. I love the atmosphere.”

Amanda, a sophomore nursing major, agreed, although she was a bit nervous returning from the long four-month classroom hiatus. Her concern – mostly – was remembering and navigating the campus layout. “Some of the buildings are hard to find,” Amanda said as she and Lauren laughed with first-day-back giddiness.

One table over sat Shala Do and Rose Nguyen. The two high school friends, now freshmen at Radford, were struck with the enormity of campus, particularly compared with their high school, Roanoke Catholic School.

Both were a little nervous sitting in their very first college classes earlier that morning, they said, but their anxiety was quickly eased minutes after their professors began speaking.

“The professor made some jokes, and that put me at ease,” said Rose, a nursing major who grew up in Vietnam and moved to Roanoke two years ago. “I’m really going to like it here.”

Tony Sanchez has known for a few years that he would enjoy attending Radford University. “I’ve been wanting to come here for a while now,” he said, sitting on a wood bench outside Peery Hall. “I’ve heard a lot of good things about Radford.”

Tony, a junior transfer student, has been learning about Radford from his brother, Alex Sanchez, who graduated from the University in May 2019. “He really liked it here, and he talked a lot about it,” Tony said of his brother.

Alex’s influence was one reason Tony chose to transfer to Radford, but another was the University’s information technology programs where he can study software engineering. “It has a lot of career paths and there is a lot of job security,” he said.

By the time he had found a seat on the bench, Tony had already been to two computer programming classes and said he “definitely” had the first-day jitters.

“But, I’m just excited to start classes,” he said. “This is a cool place.”

Alison Maruszczak and roommate Lacey Guggenheim had no first-day butterflies. The two second-year graduate students in the Speech-Language Pathology program were already looking over a syllabus, pecking away on their laptop keyboards Monday in the Peters Hall lobby and eager to get going on clinical placements that were to begin on Tuesday.

“We know what to expect by now,” Alison said with a serious, down-to-business tone.

While Lacey came to Radford University from Cincinnati, and Alison from Rhode Island, Victoria Bowen did not venture far from home for her undergraduate education. The junior Recreation, Parks and Tourism major hails from Radford. She chose her hometown university because she finds comfort in “the environment here” and having her family close by.

There is a family feel, too, she said, among the students and faculty in Recreation, Parks and Tourism. “It’s a small department,” Victoria said. “I really enjoy getting to know all the professors in my major.”

Their influence helped her determine that she wants to be right where they are someday, teaching the subjects and topics they love to students who are eager to learn.

“They have gotten to know me and helped me figure out the things I am most interested in. I can email them. I can call and ask questions. They are great,” Victoria said of the Radford faculty. “I want to work on research in sustainability in tourism, get my Ph.D. and teach at a university like this one someday.”

Later, across campus, in the Center for the Sciences, Gracie Osborne walked out of Assistant Professor David Anderson’s, Ph.D., Anthropology 101 class looking captivated.

“Have you ever been in a place you just knew you were meant to be?” the freshman from Marion, Virginia asked. “That’s the way I feel right now. I’m going to love that anthropology class. Love it!”