At 5 a.m. on July 17, 2019, the sun was not yet peeking over the mountains into the Roanoke Valley as 20 students and two faculty members from the Radford University Carilion (RUC) Department of Physician Assistant Studies joined other volunteers to conduct the Summer 2019 Point in Time Survey.

The survey is administered once or twice per year, across the country, including all jurisdictions of Virginia. In Roanoke, it is conducted by the Blue Ridge Interagency Council on Homelessness, using almost exclusively volunteers to count and collect information on sheltered (residing in emergency shelters) and unsheltered (residing outdoors) people experiencing homelessness in the city.

According to the Council, the data collected offers a snapshot of homelessness on a single night, which is then used to qualify for federal homeless assistance funds from the U.S. Department of Housing and Urban Development (HUD). In addition, the Council says that “the data provides valuable information for area service providers, policymakers and the general public on the individual and family challenges and barriers associated with homelessness.” 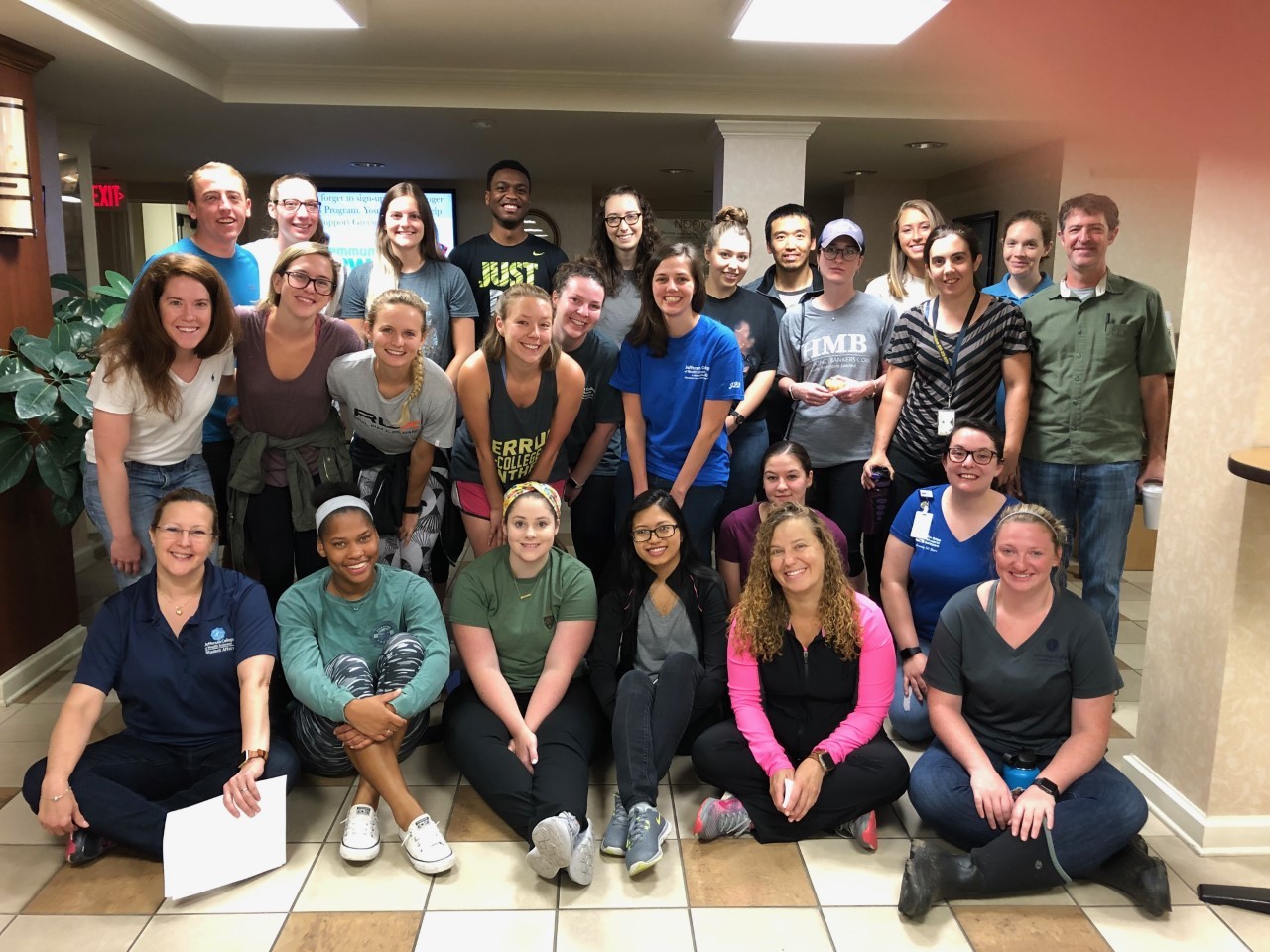 The students have been part of the team gathering information for about seven years, usually taking part during their first, or didactic, year of study. The program is a 27-month graduate level academic offering leading to a Master of Science degree.

Paula Prince, Ph.D., an assistant professor in the Department of Sociology, initiated participation by the students. She serves as chair of the Council and felt the students could bring a fresh perspective to the survey while also benefiting them as future healthcare professionals.

“I suggested that the students conduct the survey using what was then the new Vulnerability Index (VI) data collection instrument,” Prince said. “The VI had specific questions about the health status of the person who was homeless that I knew our traditional volunteers would have difficulty assessing.”

In addition to the students, Prince also recruited Judy Smith, Ph.D., a professor in the Department of Physician Assistant Studies. Smith became so invested in the project that she soon joined the Council as a regular member of the council.

“This is such a great opportunity for the students to get involved with a significantly underserved part of our community,” Smith said. “While the students weren't doing physical assessments with the unsheltered individuals, they were gathering health histories and current health difficulties using their interview skills that we’d worked on during the previous semester.”

Prince added, “As future healthcare providers, I thought the students would be perfect for this endeavor.”

Through their work with the participants, the students help those they interview feel included and recognized as part of the Roanoke community. This culture of service and inclusivity is a value that RUC works to instill in all students through activities like the survey.

“I think it is really helpful for the students to get to talk to individuals who are unsheltered and have lost the place they call home,” Smith said. “We talk about the social determinants of health in class and psychosocial vulnerabilities that predispose individuals to illness and disease, but getting the opportunity to actually talk to someone who is homeless — and to find out why they are unsheltered and what has happened in their past to cause homelessness — makes the didactic learning much more real.”

Before the survey is implemented, volunteers are trained by members of Roanoke's Division of Human Services Homelessness Assistance Team on best methods for interacting with sheltered and unsheltered people, how to collect the information for the Vulnerability Index and how to approach an individual who might be sleeping, among other things. Each team is also accompanied into the field by a trained outreach worker or Smith.

On the day of the survey, volunteers get started before sunrise to ensure they identify participants and their circumstances accurately. “We begin so early because that’s when the folks we survey are still in their overnight environment and haven’t yet moved on to start their days,” said Prince.

A survey was conducted in January 2019, but a summer count was added this year to bolster the data collected last winter. Prince said that are significantly more unsheltered people out in the summer, so the Council added the mid-year survey to account for that increase. She said that, while HUD does not require this summer count, she anticipates it will continue in years to come.

The last survey report states that 317 people interviewed were experiencing homelessness in the Roanoke region, with 96.5% staying in emergency shelters and 3.5% staying in unsheltered locations. Of those participating, 18.3% were children under 18, 5.7% were between the ages of 18 and 24, and 74.4% were over the age of 24.

Data from the survey shows that overall, homelessness in Roanoke is declining since 2012, having dropped 43.5%. However, between 2017 and 2018, those numbers began to creep up slightly.

“This activity is a real eye-opener for many of our students to realize how the participants live, where they live and how resourceful they are,” Smith said. “It also helps develop empathy in the students. It always reminds me that biases and stereotypes exist because of ignorance, and many times all it takes is a chance to talk to a person from a stereotyped or misunderstood demographic to remove the pre-existing bias that exists in one’s mind.”

Prince added, “The students are incredibly valuable in gathering this information. I can’t say enough about their energy and intelligence. They have done an excellent job, and we couldn’t ask for better volunteers to help us accomplish this survey.”