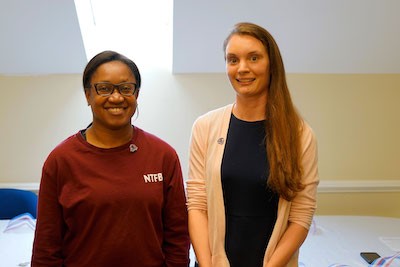 Thank you for your service.

Those are words that should be said every day. On March 21, those words had a special audience in mind: the many female veterans who are part of the Radford University family.

The event, which was held in the Military Resource Center located in Russell Hall, occurred in conjunction with the Virginia Women Veterans Week celebrations held across the Commonwealth of Virginia.

“We are on active duty 24/7. It’s easy to slide in and teach on basic military history, tactics, etc. because that is what we do every day,” McBride-Rentschler said. “That’s why I decided to continue my service to veterans by helping recruit new leaders to the army as a contractor. That’s why I decided to be a contractor – so I could continue my service.”

McBride-Rentschler started her service to the United States out of not only a desire to serve the country but also to travel.

“The military gives you the opportunity to travel, experiences that other people won’t get to experience,” she said. “I’ve been to Iraq, Afghanistan and Kosovo. Those countries don’t have the same economic means as the United States, so it makes me appreciate the country which I serve and live in.”

Retirement for McBride-Rentschler will be a change. She had to let everyone know her comings and goings, report to sick call when under the weather, among other things.

“It’s the little things. For me, it might be getting my nails done and putting color on them. For some people, that might not be that exciting. For me, it is. I can wear my hair down. I can use an umbrella,” McBride-Rentschler said with a smile.

Sherry Wallace, Spc. and the University’s director of Media Services, served in the U.S. Army from 1986 through 1994. Many of the skills and talents Wallace gained while serving translated to her career after the military.

“You aren’t born knowing how to lead – it is something you learn,” Wallace said. “I was very fortunate to be able to serve under some excellent leaders. That can really help pull a unit together…There is no ‘I’ in team. The entire unit has to work together full-stop. It also instills that sense of always wanting to help the unit.”

Wallace joined the U.S. Army to serve the United States, travel and to be able to use the G.I. Bill to assist with her higher education.

Each of the women veterans honored at the ceremony received a pin from the Virginia Division of Veterans Services (DVS).

The DVS is also hosting a Virginia Women Veterans Summit on May 16 and 17 in Hampton, Virginia.