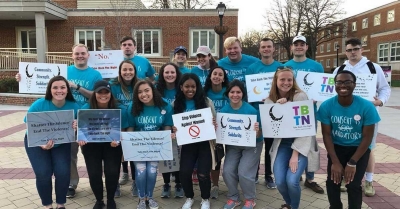 Radford University students participate in the Take Back the Night Rally on April 3.

Take Back the Night is an international event and nonprofit organization with the mission of ending sexual, relationship and domestic violence in all forms.

Radford University's Substance Abuse and Violence Education Support (SAVES) services first organized the on-campus rally in 2017 to raise awareness of campus sexual assault and break the stigma for those seeking support. An inspiring call to action, the event emboldens and unites the student body as they support one another and serve within and beyond the campus community to address sexual violence.

This year’s Take Back the Night rally at Radford University was held on April 3. Before attendees marched across campus that evening, they attended a special presentation called “Beat the Blame Game.” The program was led by Anne Default of Catharsis Productions, a group known for its "honest and constructive dialogue" about sexual assault and violence.

“Student turnout was great, and the presenter enjoyed our active participation and interest in her topics, which included difficult issues, such as victim blaming,” said Cody Hartley, vice president of the Student Government Association (SGA). “I believe this has assisted the campus community in better understanding sexual assault issues and allowing us to take that important information out into our community to teach others." 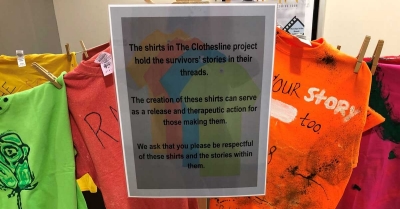 The Clothesline Project on display in the Bonnie.

Following the presentation, students marched across campus with signs and glow sticks to spread the important message of sexual assault awareness with their fellow Highlanders.

In addition to Take Back the Night, Radford University also supported The Clothesline Project, a non-governmental organization created to bring awareness to the issue of violence against women, men and children. Members of the Radford family impacted by violence were invited to express their emotions by decorating an anonymous T-shirt. The inspired and powerful shirts were displayed on a clothesline in the Bonnie throughout the week.

"These events are paramount to make sure the issue of sexual assault is constantly being talked about,” Hartley said. “We want to keep these issues fresh and never let them fall through the cracks.”

In addition to SAVES and the SGA, Radford University’s Sexual Assault Awareness Week was also supported by the Women’s Resource Center of the New River Valley, the Office of Institutional Equity, the Radford University Police Department, Radford City Victim Witness and the Women and Gender Studies + Program.