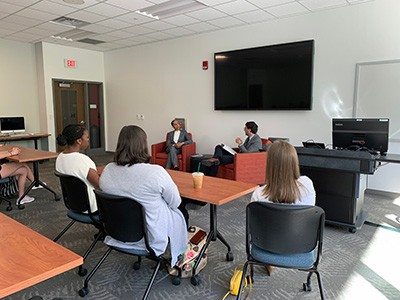 Prior to joining the Office of the Attorney General, Pearson served for 10 years as general counsel for the Richmond Police Department in Richmond, Virginia. Pearson also served as a prosecutor in the City of Richmond Commonwealth Attorney’s Office, was the client services director for the Legal Information Network for Cancer, clerked for the Washington, D.C. Court of Appeals, established her own law practice in Charlotte, North Carolina and worked for the Equal Employment Opportunity Commission (EEOC).

During the open-format discussion, hosted by Assistant Professor of Criminal Justice Luke William Hunt, Pearson talked about the law being a sword and a shield, the importance of police training and how students can best prepare themselves for law school.

Pearson said that for any job – but especially as a lawyer – you need to know what personal beliefs you hold that will not be compromised. “It is a challenge and you have to reconcile that fight within yourself,” she said.

"As our students move toward a career and life after Radford, it can be easy to overlook the need to reflect upon what it means to have integrity," Hunt said. "There is no doubt that one's personal and professional values will be tested, and it's deeply important to begin thinking about that now."

While Pearson worked with the Richmond Police Department, she found that training officers beyond the requirements of the Department of Justice to be the most effective way at reducing the number of lawsuits faced. Use of force simulators, such as the one inside the College of Humanities and Behavioral Sciences, improve response to a multitude of scenarios.

At the end of her talk, Pearson took questions from students, which covered opioid lawsuits, combating human trafficking, enforcing difficult laws and crimes that are over-prosecuted.

"One of Deputy Pearson's most compelling points was about the fundamental nature of criminal justice, especially the role of mercy in criminal justice," Hunt said. "I think this highlights the many different facets of a concept such as justice. She gave our students a lot to think about as they move forward in their study of law."

In the end, Pearson said, you need to “be true to your oath to uphold the laws of the Constitution.”