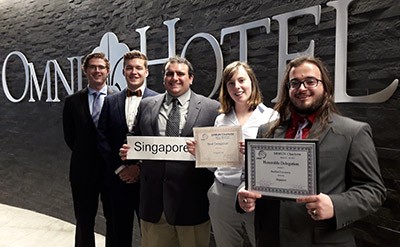 The Model UN Club represented Singapore at the conference and received two awards, one for Best Delegation in the United Nations General Assembly Plenary, won by Gabriel Bennett and Samantha Goldsborough, and another for Honorable Delegation, which was won by all five students for their overall performance.

“It is very hard to win these delegation awards as everyone on your team must perform well in all the different committees in order to be recognized,” said Paige Tan, professor of political science at Radford University and Model UN Club advisor. “They were very self-reliant once we got to the conference and they worked hard.”

Part of that hard work was the concentrated long hours that made up the Model United Nations event. Committees started at 7 a.m. and lasted until 10 p.m. on the first day. On day two, the sessions lasted from 8:30 a.m. to 10 p.m., with the final day a standard 9 a.m. to 5 p.m. workday.

Matthew Tourbin, Zachary Zarambo and Jacob Portnoy attended the conference in addition to Bennett and Goldsborough. The students worked in two groups of two, with one student working independently. The students were on the General Assembly Plenary Committee, which is the main general assembly of the United Nations. Bennett and Goldsborough worked on preventing trafficking of persons and forced labor, as well as improving healthcare for children.

“Even three days for one of those issues is not long enough to cover all the nuances,” said Goldsborough, a special education major from Maryland. “Every single country is there representing their own needs and wants."

The reward for facing those challenging issues was the winning the Best Delegation in the United Nations General Assembly Plenary award, Goldsborough’s first collegiate Model UN award. Goldsborough won the award with Bennett.

“It’s nice to be able to rely on a fellow delegate and trust that they are good enough that the two of you together will get the work done,” Goldsborough said. “It was nice to hear Radford’s name called out at a 500-person conference. We were only five of them. All five of us made enough of an impact that we got an honorable delegation award.”

Aside from winning the award, being a part of the Model UN Club has helped Goldsborough, as well as the other club members, enhance their skills in areas such as public speaking, Parliamentary Procedure and Robert’s Rule of Order.

“In my freshman year of high school, I was afraid of public speaking. It was terrifying, but I wanted to force myself to do it,” Goldsborough said. “I had an awesome mentor and now public speaking is my forte. I get up as many times as possible to give speeches. I went from hating public speaking to loving it.”