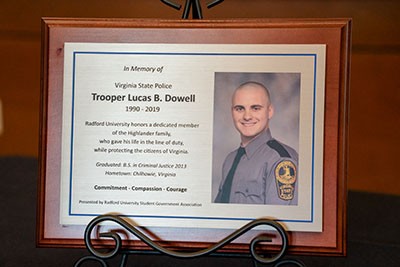 The Highlander family can be characterized as a group that consistently shows strength, unity and a strong sense of support. This was evident recently when Virginia State Police Trooper Lucas B. Dowell was killed in the line of duty.

After receiving the tragic news, Radford University students immediately aligned around a desire to honor the life, memory and sacrifice of Trooper Dowell. Specifically, they wanted to remember Trooper Dowell’s legacy of commitment, compassion and courage to inspire students, faculty and staff.

With the unveiling of a plaque, that will hang in the Department of Criminal Justice, Trooper Dowell’s legacy will inspire current and future generations of Highlanders.

“The Radford University SGA is honored to give this plaque to the Department of Criminal Justice,” said Caroline Bamford, Student Government Association (SGA) senator. “This plaque is a reminder to us of those who put their lives on the line every day to protect and serve the citizens of this Commonwealth.”

Bamford and SGA Vice President Cody Hartley, who each had fathers that served as law enforcement officers for more than 20 years, knew they wanted to honor Trooper Dowell in a special way – a way that would last in perpetuity.

“We knew we needed to do something for future Highlanders to know what it means to be dedicated to your job, to show both passion and compassion and to have the courage to do what you believe in,” Bamford said. “We wanted it to be in a place where students can be inspired, while remembering him and his sacrifice.”

Many distinguished guests honored the memory of Trooper Dowell ‘13, including his parents, Mike and Rebecca Dowell; Charles W. Carrico Sr., state senator from the 40th District; and State Troopers London Atkins and Jonathan Barbour, who served with Trooper Dowell. 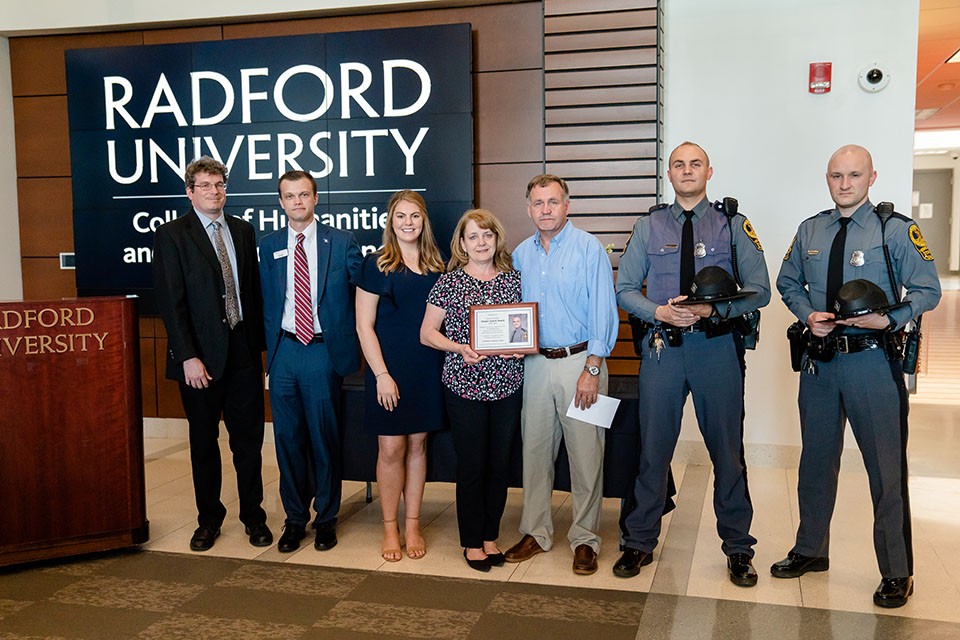 “Trooper Dowell came to Radford in 2009 eager to follow his passion and make his mark on our society. He did just that,” said Interim Provost Kenna Colley. “Today’s event is a testament to his commitment, his character and his service.”

Senator Carrico thanked everyone for attending the intimate event to “pay tribute to a man who was a hero and made the ultimate sacrifice to the Commonwealth of Virginia.”

“[Trooper Dowell’s] name will never be forgotten,” Carrico said. “Radford University is doing that today by honoring him with this plaque.” 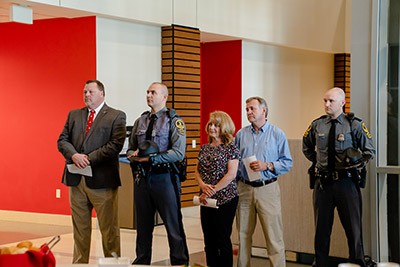 The plaque engraving reads: “Radford University honors a dedicated member of the Highlander family, who gave his life in the line of duty, while protecting the citizens of Virginia.” Below the engraving are the words commitment, compassion and courage.

“In the outpouring of sorrow and memories that followed that February day, it became clear that Trooper Dowell exemplified each of these qualities in his work for the Virginia State Police and in his service on their tactical team,” said Department of Criminal Justice Chair Steve Owen.

“We ask police officers not only to enforce the law, but to be counselors and psychologists, to protect the vulnerable, to empathize with those who may have been forgotten or even scorned by society, to shepherd members of the public through some of life’s most challenging hours and to face danger from which others would recoil. We ask so much of our law enforcement officers, far more than we can ever prepare our students to face as they enter the profession. Why, then, would someone make the choice to pursue such a challenge? The reason is because of the values written here, the values that we saw through Trooper Dowell’s life and career, cut far too short.”

Those values of commitment, compassion and courage are forever etched in the plaque honoring Trooper Dowell. The plaque will inspire both current and future members of the Highlander family, while remembering Trooper Dowell’s life and sacrifice.