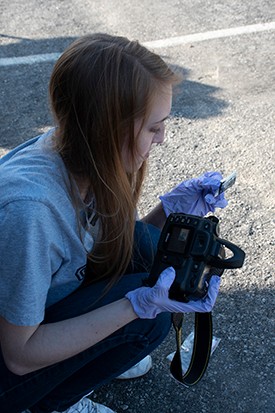 Samantha Gibson analyzes a fingerprint found during the arson exercise. Click the image for a gallery featuring more photos from the arson investigation exercise at Radford University.

Students at Radford University entered the aftermath of a raging fire as they took part in a unique arson investigation exercise.

The fire – and subsequent investigation – took place on April 16 in Lot Z at Radford University, as the capstone project of the Fire and Arson Investigation class created and taught by adjunct instructor Todd Jones ’88 MS ’94. In this exercise, students learn and practice skills taught within the course, as they collect and handle evidence. Working together, they determine the source and origin of the fire.

This year, Samantha Gibson, of Bluefield, Virginia, one of the students participating in the exercise, investigated fingerprint identification after a burn. Gibson is pursuing a criminal justice major and a minor in forensic science and combined both of her interests for the exercise. She is conducting a research project on obtaining fingerprints from objects found at arson scenes.

One of the fires was started with a Molotov cocktail and was one of the objects on which Gibson found fingerprints. She also was testing a ceramic mug, ceramic bowl and a wine glass.

“I’ve been able to retrieve four fingerprints off of the Molotov cocktail. One had ridge detail, but the other three did not,” Gibson said. “Ceramic and glass seemed to make it through the fire. There was some ridge detail found. The soot was able to protect some of the fingerprints.” 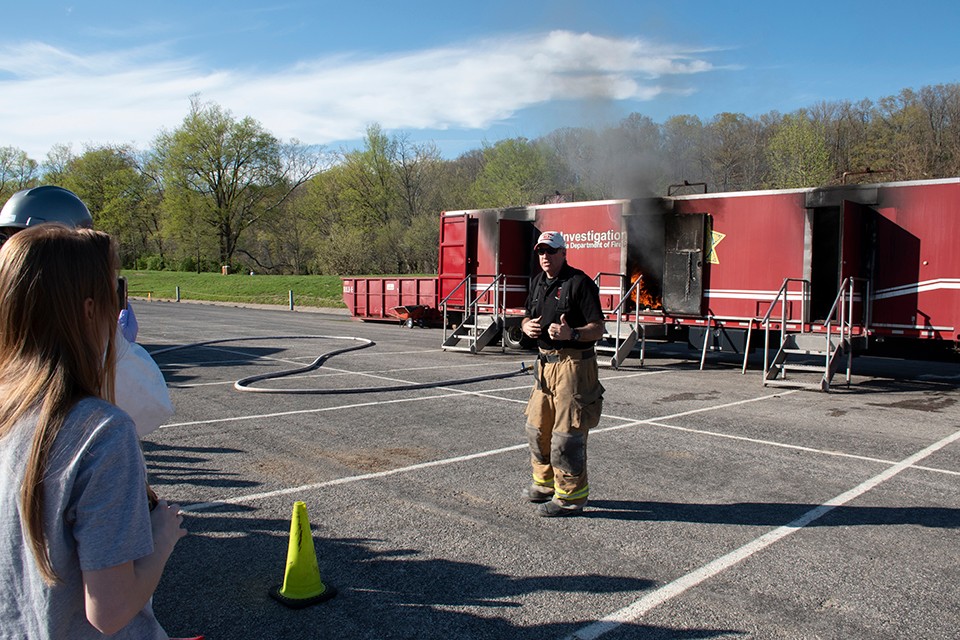 Jones talks to his class during the burn.

Jones said that fingerprint identification is another aspect of the burn exercise, which is in its fifth year.

“It’s another technique for forensic investigations and a fire scene,” Jones said. “We know there is trace evidence there, there is no question about that. Dr. Donna Boyd [Eminent Professor of Anthropology at Radford University and Co-Director of the Radford University Forensic Science Institute] works so closely with law enforcement and fire service on the identification of human remains and other objects. She speaks to my class every year on her role in investigations. Having her on staff is another example of the working relationships with other departments at Radford University." 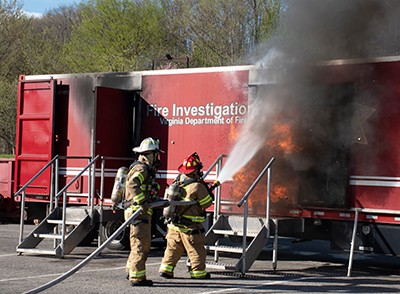 Firefighters put out the fire during the arson investigation exercise.

Steve Owen, chair of the Department of Criminal Justice, said that the arson investigation exercise allows students another opportunity to put theory into practice.

“Reading about it in a book is one thing, being on a scene – even a simulated scene – and being able to put it into practice gives students an experience most will never have,” Owen said. “It truly embodies what the Department of Criminal Justice does in putting theory into practice and giving students skills that will help them in their careers.”

That experiential learning is why Alivia Dunn, of Charlotte County, Virginia, attended Radford University. This was Dunn’s second time seeing the burn – but her first participating in the exercise. She said that using – and sticking to – the scientific method was important.

“We learned about different kinds of burns and ways to collect evidence,” Dunn said. “I have a job offer from the Christiansburg Police Department, and I hope to use these investigative skills in the future.”

Jones echoed the importance of using the scientific method. “It’s taking data points and putting them on paper to come to a conclusion,” he said. “That’s scientific methodology. We use it every day – we’re just teaching it as an investigative skill.”