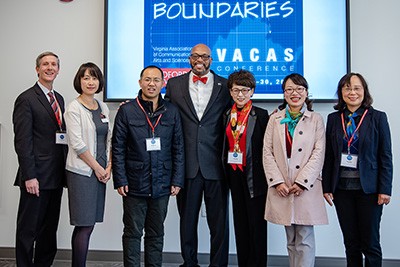 Radford University and the School of Communication, hosted four representatives from the Southwest University of Political Science and Law (SWUPL), located in Chongqing, China, from March 28 to April 3.

Their visit encompassed the hope of building a relationship with the Radford’s School of Communication and participating in the Virginia Association of Communication Arts and Sciences (VACAS) conference.

CHBS Interim Dean Matt Smith said that Radford has as much to share as it has to gain through the potential partnership with SWUPL.

“We broaden our knowledge and improve our methods even as we share what we know with our international partners,” Smith said. “This kind of exchange is enriching for all involved. While our initial encounter involved faculty getting to know one another, both programs are interested in facilitating exchanges involving our respective students. We would love to see our students travel to China and to welcome Chinese students to study with us at Radford.”

Zhizhong Zhang, Ph.D., another representative from SWUPL, attended his first international conference during the visit to Radford University.

“The organization that hosted the conference took a lot of thought into planning and organizing the conference,” Zhang said through Shuo Yao, associate professor in Radford’s School of Communication. “Everything was considered. Almost every aspect has been considered carefully into making sure it went smoothly and was successful.”

Zhang presented on his research regarding the profit model of China’s internet media, while Xiaoping Luo, Ph.D. presented on her research about how the city officials use promotional films to construct the images of Chongqing City.

Liu and Jianping He, Ph.D. presented on their research regarding China’s family planning policy evolution and the news coverage of it by Chinese mainstream media. They performed a content analysis that spanned from 1978 to 2018.

“In every society globally, media is very important and in China, media is led by the government,” Liu said. “There are some exceptions. As China opened up to the outside world, so did the media. And, the media changes a lot. All of our research is about media and Chinese society.”

Liu said that China is interested in the western format of higher education – one that is student oriented.

“[We want to] increase interactions and discussions in class,” she said. “[Currently], our class format is still teacher-oriented. We give a lecture and students take notes.”

During their visit, Radford University student Starr Woods, of Richmond, Virginia, gave the four representatives a tour of Radford campus and facilities. Zhang, He, Liu and Luo were also able to do a classroom observation during their visit, as well as visit local landmarks, such as the Blue Ridge Parkway.

“We live in an increasingly diverse culture,” Smith said. “The more our students can be exposed to people from different countries and different traditions, the more prepared they will be when they encounter the world’s diversity as professionals.”