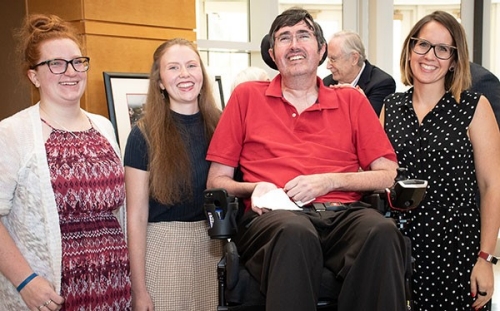 The College of Visual and Performing Arts honored former assistant professor of photography Andrew Ross (third from left) with a reception on Sept. 20 and announced the formation of Andrew W. Ross Endowed Photography Scholarship with funding provided by Ross’s parents, Coleman and Carol Ross. The first recipients of the Andrew W. Ross Endowed Photography Scholarship are, from left: Amber Rodgers, Sarah Carriker, and, at far right, Alex Moral.

Ross, who began teaching at Radford in August 2014, stepped down from his position at the close of the 2018 spring semester after being diagnosed with amyotrophic lateral sclerosis (ALS), or Lou Gehrig’s disease.

In addition to honoring Ross, the CVPA announced the formation of an endowed scholarship for the photography program with funding provided by Ross’s parents, Coleman and Carol Ross.

“I have always been truly in awe of Andrew’s love for his students, his mission to share his love and knowledge of photography with our university community and his overflowing support of all the arts on our campus,” CVPA Dean Margaret Devaney said at the reception with a collection of Ross’ black and white photographs serving as a backdrop. ”In a relatively short time, our photography program expanded in the most amazing ways and our students flourished.”

Devaney spoke further of Ross’ commitment to students and the program, including his donation of photography and printing equipment and the reorganization of an art gallery in the Covington Center, which has now been renamed in his honor, the Andrew W. Ross Student Art Gallery.

“He is an artist; he is a master teacher,” Devaney said. “And he is an advocate of the arts.”

Ross attended the reception, but his medical condition has left him unable to speak. He prepared remarks and his father read those at the gathering.

At Radford, Andrew Ross said he found “students, colleagues and a campus community that I fell in love with. Radford University has what I was really looking for in a photography program.”

Ross said he was thankful to his parents and their “generosity that will allow me to continue to be a part of this program through the naming of a new scholarship in my honor,” Coleman Ross read. “By introducing this photography scholarship, my hope is it will help Radford to recruit, retain and reward talented students like those announced today who will bring recognition to photography and the arts here at Radford University.”

The first recipients of the Andrew W. Ross Endowed Photography Scholarship are Amber Rodgers, a senior from Meadows of Dan; Sarah Carriker, a senior from Alexandria who is graduating in December; and Alex Moral, a second-year graduate student from Alicante, Spain. 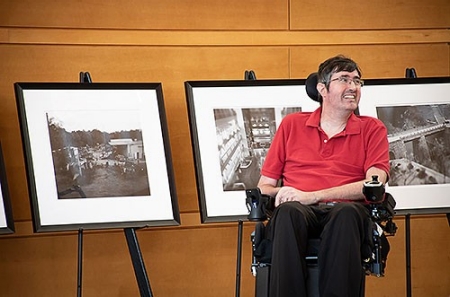 “Alex, Amber and Sarah, I am so pleased to see you as the first recipients of the award. I’m sure you know how much I miss working with you and all of my students,” Coleman Ross said, still reading Andrew’s written comments. “If your future success gives you the ability to be generous to this university, I hope you will remember the impact a scholarship like this can have on a budding artist.”

The scholarship came as a “complete surprise,” Carriker said. “It’s going toward my senior exhibition. I felt like that’s his way of helping me, beyond how he’s always helped me these past two years.”

“This will be a reminder to me to keep going,” she explained. “Even if I feel my work isn’t that great, this will remind me to keep going because someone did recognize me. That’s a big reminder this scholarship will give me.”

Moral had worked with Ross for three semesters, she said, and learned “so much” from him. “He was very professional. He was very passionate about photography, and developing new ideas,” Moral said. “He encouraged us to put our work out there. He was many things to us.”

“On behalf of the Radford family, I express my heartfelt appreciation to former Radford University Assistant Professor Andrew Ross and the entire Ross family for their steadfast commitment to our students,” said Radford University President Brian O. Hemphill. “During Andrew’s time at Radford, he was the embodiment of the Highlander spirit. He tirelessly dedicated himself to the betterment of our students.

“A lasting testament to his work is the Andrew W. Ross Student Art Gallery in McConnell Library, a space that Andrew was instrumental in turning into a gallery for students to display their artwork,” the president continued. “Andrew’s incredible work and the Ross family’s generous support have made a lasting impact on this campus and will inspire current and future generations of Highlanders.”